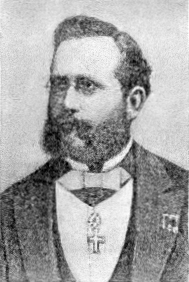 Jean Guillaume Auguste Victor François Hubert Kerckhoffs von Nieuwenhof (born January 19, 1835 in Nuth (now the Netherlands ), † 1903 in Paris , France ) was a Dutch linguist and cryptologist . He shortened his name to Auguste Kerckhoffs when he began his studies at the Université de Liège (Liège), from which he graduated with docteur ès lettres . He stayed for some time in France and the Netherlands, where he was a teacher of German at HEC Paris and the Ecole Arago worked.

Kerckhoffs as a cryptologist

His handwriting La Cryptographie militaire , he finally, after two years of work in 1883 published, considered a milestone in cryptography of the 19th century , the then with confidential communications via telegraph lines busy.

The work contains Kerckhoffs' principle for "strategic cryptology", according to the understanding of the time, a military science. Further rules and requirements for confidential communication are established:

If one interprets the problems of today with care, these rules still apply. The easy-to-remember key today would be more of a password or PIN . Of course, portability is trivial for software solutions. When it comes to hardware (e.g. implementation on chip cards ), it is hardly a challenge nowadays if everyone involved uses similar components (e.g. the same chips).

From 1885 Kerckhoffs began to be interested in the world auxiliary language Volapük and was also Secrétaire général de l'Association française pour la propagation du volapük for several years . He propagated this in Spain and Scandinavia and published a textbook. Differences about a simplification of the Volapük led to a break with its creator, the pastor Johann Martin Schleyer , who wanted to have his rights to the language preserved. This split the Volapük movement.