Karl Farkas grew up with two sisters and an older brother in Vienna- Alsergrund . His parents, Moritz and Franziska Farkas, of Hungarian descent, ran a shoe shop. The author Felix Salten was an uncle on his mother's side . According to his parents' wishes, Farkas should become a lawyer , while his brother Stefan should follow in his father's footsteps. However, Stefan preferred to become a painter. He died by suicide when his parents defied his plans. Marked by this loss, the parents let their second son live out his passion for the theater. Farkas wrote his first comic scenes as a schoolboy.

At the end of July 1914, Karl Farkas was drafted into the 4th Honved Infantry Regiment. He was used, among other things, in the temporary reconquest of Przemysl. After being wounded by shrapnel, he was deployed on the Russian, Romanian and Italian fronts. After an offensive at the Altano position near Monte Tomba, Farkas was awarded the Silver Medal of Bravery as a battalion gas protection officer.

He attended the Academy for Music and Performing Arts in Vienna and made his debut in Olomouc as Tsarevich in a play by Gabryela Zapolska . After various appearances in Moravia and Austria, he returned to Vienna in 1921. There he was engaged by the director Egon Dorn at the cabaret Simpl and worked as a “lightning poet” under the nickname Die Zecke . With Fritz Grünbaum he appeared in double confessions , an art form that originated in Budapest . In 1924 he married the actress Anny Hán . From 1926 Farkas worked at the Vienna Citizens' Theater.

In 18 pictures he and Fritz Grünbaum had beautiful girls show their legs with the music of Egon Neumann in the journal of love and Rita Georg paraded in a trouser role . Farkas himself sang, danced and told jokes in his charming way. The guest performance of the Marischka Revue, which began on October 1, 1927, also fitted into this scheme. It was performed again 430 times under the title Wien laughs . Farkas and Fritz Grünbaum performed last year's hit revue, which had lost none of its popularity, in thirty pictures with music by Ralph Benatzky . There were 120 participants who were able to draw from a pool of 900 costumes. Farkas was also active as a hit poet. From his pen, for example, the texts of the songs If Elisabeth didn't have such beautiful legs and a girl picks currant .

In 1928 Karl Farkas bought a villa built in 1906 for himself and his family as a summer resort in Dörfl in the market town of Reichenau an der Rax .

In 1938 , as a Jew , Farkas had to flee to Brno and then to Paris . In 1939 he was interned in Camp de Meslay-du-Maine as a "dangerous foreigner". In 1940 he signed up as a soldier for the French army, which declared him unfit. He came to Lisbon via the so-called Spain route and was able to flee to New York . When he arrived he had refugee status , but he lacked a necessary affidavit , the necessary guarantee from an American citizen to vouch for him. He was interned, initially threatened with deportation to Europe. New York friends like Alexander Roda Roda , whom he met on the crossing, stood up for him by depositing a sum of 1,000 dollars. In order to earn a living, he mainly performed in clubs in front of other exiles . As a refugee, he was not given a work permit. He had divorced his Catholic wife as a precaution so as not to expose her to reprisals from the Nazi regime.

When he emigrated, he also went “foreign”. In the famous jazz film Boogie Woogie Dream he acted both as a script writer (mentioned in the opening credits) and as an anonymous actor. In it he seems to be the waiter who haunts the picture several times. From the jazz side, the strip shows the great Lena Horne , among the musicians Teddy Wilson , Edmond Hall and, above all, the two "leading actors" Albert Ammons and Pete Johnson . His private life was overshadowed by the severe disability and need for care of his only son Robert ("Bobby", 1928–2009), which occurred as a result of meningitis .

In 1946 he returned to Vienna and remarried his divorced wife. From 1950 he appeared again in Simpl, which he directed until his death. He also worked as an author and director and wrote all the revues together with Hugo Wiener . His ensemble included Maxi Böhm, Ossy Kolmann, Fritz Muliar, Heinz Conrads, Hugo Wiener and Cissy Kraner. In the station Rot-Weiß-Rot he moderated the "topicalities". According to the State Treaty, ORF radio broadcast the program What do you think, Mr. Farkas? out. Wiener also wrote the double conferences for Farkas and his new partner Ernst Waldbrunn , later Maxi Böhm . From 1957 he also appeared regularly on radio and television . His "balance sheets" became popular on ORF: balance of the year , balance of the month and balance of the season . In 1965 he was the first cabaret artist in history to be awarded the professional title of "Professor" by the Austrian Federal President in recognition of his services to Austrian cabaret . After the war, he privately bought a summer house in Edlach an der Rax . Farkas had a particularly close relationship with his colleague Maxi Böhm and his family; He was particularly fond of Böhm's daughter Christa , who died early and who called him "Uncle Karl".

From and on January 1, 1969, the balance sheet for the month , including the Farkas-Waldbrunn double conferences, was already available in color. The ORF introduced color television with the New Year's Concert in 1969. Therefore, on the video mentioned below, with some remarkable appearances lasting around 70 minutes, some already exist in color. In 1970 Farkas and Waldbrunn appeared as puppets. These were produced by the Austrian doll artist Arminio Rothstein . 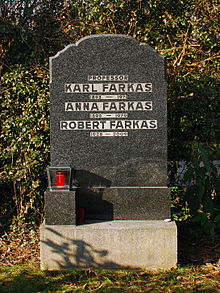 Farkas stood on the stage of his cabaret until the day before his death. In 1971 he died of stomach cancer.

Countless utterances by Farkas are common as quotations. A quote that was wrongly ascribed to Karl Kraus for a long time should also come from him:

“I am seriously concerned about the future of Austrian literature. Look, Grillparzer is dead, Nestroy is dead - and I'm no longer the youngest either ... It's different with German literature. But we Austrians differ from the Germans in so many ways, especially in the same language. "