Polyethylene glycol , PEG for short , also polyethylene glycol and in pharmacy also macrogol , is a liquid or solid, water-soluble and non-toxic polymer with the general empirical formula C 2n H 4n + 2 O n + 1 - depending on the chain length . Because of these properties, it is used in medicine , as an active ingredient carrier in pharmacy , in industrial applications, in cell biological research and in cosmetic products. PEG has - depending on the chain length and the resulting molar mass  - different properties.

Polyethylene glycol is produced by polymerizing ethylene oxide using alkaline catalysis , with water, monoethylene glycol or diethylene glycol being used as the starting molecule. After the desired molecular mass has been reached, the reaction is terminated by adding an acid (e.g. lactic acid).

The reaction can also take place with acid catalysis, then it is terminated with the addition of slightly basic water.

Radiographic investigations have shown that the PEG chains can be present in two different modifications. A zigzag structure is ascribed to shorter chains, the degree of polymerization of which does not exceed n = 10, while what is known as a meander structure is formed in longer chains .

The most important property of all polyethylene glycols is their solubility in water. Liquid PEG can be mixed with water in any ratio. 50 percent solutions can even be produced from a PEG 8000. The use of macrogol (PEG 3350) as a laxative is based on this property.

The liquid PEG are hygroscopic. The ability to absorb water decreases with increasing molecular weight.

PEGs are non-volatile, a fact that is important when used as plasticizers or humectants. Thermal decomposition occurs at temperatures above 150 ° C, which is associated with weight loss due to the volatile decomposition products. Applications at higher temperatures make the use of antioxidants necessary.

The polyethylene glycols have exceptionally low toxicity values ​​(acute and chronic oral toxicity , embryotoxicity , skin tolerance). They have therefore been used in cosmetics, foodstuffs and pharmaceutical preparations for decades and are also listed in all relevant pharmacopoeias. The WHO has set a permitted daily dose for PEG in food of 10 mg / kg body weight.

The biodegradability of polyethylene glycols decreases with increasing mean molecular weight. However, up to PEG 1500 they are considered to be biodegradable . The degradation of other substances is not influenced by the PEG. Even 1 percent solutions are not toxic to fish and microorganisms. In Germany, the PEG are classified in water hazard class (WGK) 1. All polyethylene glycols can be removed thermally (incinerated) without any problems. 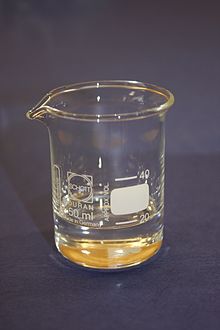 PEGs are used as active ingredient carriers in all areas of pharmaceutical preparations. The plasma half-life of some active substances can be increased considerably by means of PEGylation .

Because of their dissolving properties, polyethylene glycols are used for the production of liquid preparations - such as drops and injection preparations - and for filling gelatine capsules, as they do not dissolve or become brittle.

By mixing a solid and a liquid PEG (e.g. 50 percent PEG 1500 and 50 percent PEG 300), a water-soluble ointment base can be created which, because of its good solubility, is suitable for many active substances.

Suppository masses based on PEG, also known as macrogol as a suppository active ingredient , can be precisely matched to the body temperature. The active substances are not released by melting, but by dissolving them in the intestinal fluid in the rectum.

Polyethylene glycols are used as active ingredient carriers, solubilizers and auxiliaries in tabletting and sugar-coating.

Polyethylene glycol is usually listed with a number in the list of ingredients (for example, PEG-8 in Autan ).

In cosmetics, PEG promotes penetration, i.e. the skin becomes more permeable for active ingredients, but also for possible toxins (if any). So z. B. also Öko-Test in their article about liquid soaps on PEG derivatives used . However, there is no danger from the PEG itself.

With the help of PEG, organic objects (fresh specimens, wood soaked in water for a long time) can be converted into dry specimens. The objects that were originally kept moist (in water, alcohol or formalin) are soaked in a PEG solution for a long time or in a vacuum. Thanks to the use of different PEG molecule sizes, most of the original liquid is replaced by the PEG. In modern animal taxidermy , a mixing process is used because of the shrinkage caused by drying, whereby classic methods of preparation are included.

In palaeontological preparation, mainly subfossil fossils (e.g. finds from the Ice Age) are treated with PEG. These fossils are very susceptible to climatic fluctuations and decay e.g. B. by the stresses arising during drying. Here we only work with a solid type of PEG, which replaces the water contained in the fossils via diffusion. The PEG solidifies instead of the otherwise evaporating water and prevents the destructive stresses. Long-term experience with PEG preservation shows that this method promises the best results with this difficult-to-preserve material.

In addition to the above-mentioned use for purely pharmaceutical purposes, PEG is also used as a drug to modify the pharmacokinetic properties of proteins . The ( pegylated ) proteins linked to PEG (for example growth factors for white blood cells ) remain longer in the organism because of the delayed excretion via the kidneys, so the half-life is extended.

PEG is used in several areas of gastroenterology .

Use in colon cleansing

The substance is used, among other things, to clean the intestines before a colonoscopy . PEG-based electrolyte solutions are used for this. They belong to the pharmacotherapeutic group of osmotically active laxatives (laxatives). Oral ingestion causes moderate diarrhea and thus leads to rapid emptying of the bowel. This happens because high molar PEGs have a strong osmotic effect. They bind water via hydrogen bonds in the form of hydration shells, which in turn leads to an accumulation of water in the intestinal lumen. The resulting increased stool volume triggers increased motility of the colon via neuromuscular pathways. This leads to an improved propulsive transport of the softened stool in the colon.

Originally, PEG-based electrolyte solutions without ascorbic acid (vitamin C) were used. These preparations required a drinking volume of 4  liters . With the addition of high-dose ascorbic acid of just under 5 g per liter, which is common today, which corresponds to about 50 times the daily requirement of ascorbic acid, a smaller amount of 2 l is possible to drink. In addition, the electrolytes contained in 2 l PEG-EL and sufficient fluid intake can prevent possible clinically relevant changes in the electrolyte and water balance and thereby reduce the risk of dehydration.

Macrogol 3350 or 4000 is used as a medical device to treat constipation . Product name e.g. B. Movicol. Approx. 5 to 10 g of the powder per day - dissolved in water - are recommended or administered. The dose can be varied depending on the severity of the symptoms. There is no getting used to, as the macrogol only works physically, i.e. it is not involved in the metabolism. The bound water is transported through the entire digestive tract into the intestine, where it can soften the hardened stool. In addition, the increased volume of the stool results in increased pressure on the intestinal wall, which in turn stimulates the natural intestinal peristalsis . Due to its high molar mass of 3350 or 4000 Dalton , the macrogol can not be changed in the intestine or absorbed into the body via the intestinal mucosa, but is excreted again from the organism essentially unchanged.

Use in intestinal examinations using MRI

Another field of application for PEG is currently opening up possibly in the treatment of nerve injuries. It is based on a discovery by Todd Krause and George Bittner, who at the University of Texas in Austin used PEG to reassemble severed nerve fibers from earthworms.

In a study at Purdue University in West Lafayette , 19 dogs with severe spinal injuries were treated with injections of PEG in addition to standard treatment (including injections with steroids , physiotherapy and the surgical removal of bone fragments from the spinal column area) . The substance was administered within 72 hours of the injury. Compared to animals that received only the standard treatment, the animals recovered much faster and more extensively: after completion of the treatment, 75 percent of the animals were fully able to move again. Timely injected, the polymer appears to be the nerve cells to be protected from irreparable damage and the animals therefore faces a paraplegic to preserve. At present it is not yet exactly clear how PEG mediates this protective effect. Nevertheless, new perspectives may also open up here for the treatment of people.

The substance is also interesting because it has an antibacterial effect in a concentration of 15 to 20 percent. Individual studies report on a protective effect on the intestinal mucosa against bacterial invasion.

In ophthalmology, PEGs are used as a component of artificial tear fluids for the treatment of " dry eyes ".

Polyethylene glycols are also part of formulations with anti- apoptotic properties for the preservation of cells, tissues or organs.

PEG (especially PEG 400) is used in medicine to treat intoxication with alkyl phosphates . Areas of skin are first washed off with plenty of soap and water and then dabbed off with PEG 400. This releases the toxin and removes water and thus also the toxin from the skin. In conjunction with calcium gluconate , PEG is also suitable for the treatment of chemical burns and poisoning caused by hydrofluoric acid or nitrogen trifluoride . In the case of nitrogen trifluoride, PEG is first applied to the affected area of ​​skin and this is rinsed off with water after several minutes of exposure.

In cell biology , PEG is an important reagent for carrying out a cell fusion (cell fusion) of lymphocytes with certain tumor cells (e.g. sp2 / 0 cell line ) for the production of monoclonal antibodies and protoplast fusion . Similarly, PEG is also used in liposome-mediated transfection by helping a DNA-laden liposome to fuse with the cell to be transfected.

Similar to uncrosslinked polyacrylamide ( liquid polyacrylamide ), polyethylene glycol can be used as a molecular sieve in electrophoresis for the separation of charged macromolecules according to their size. It is also used for PEG precipitation in protein purification .