In chemistry, steric hindrance describes the influence of the spatial extent of a molecule on the course of the reaction . The term was first coined by Victor Meyer in 1894 for the observation that some reactions take place only very slowly or not at all if there are large and space-filling groups in the vicinity of the reacting atoms.

A well-known example of the influence of steric hindrance is the conversion of ketones in a Grignard reaction . If di- tert-butyl ketone is used in the reaction, the reaction is slowed down so much due to the very bulky tert - butyl groups that a maximum of one methyl group can be introduced, even larger residues no longer react at all. This is justified by the fact that the transition state of the reaction is at a very high energy level, since the bulky residues come very close to one another and the electron shells are electrostatically repelled. Thermodynamically , a higher activation energy is required for a reaction to take place, which is not or only barely achieved under the usual reaction conditions. This is linked to a kinetic inhibition: If the reaction takes place, it is slowed down by steric hindrance. 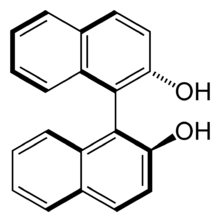 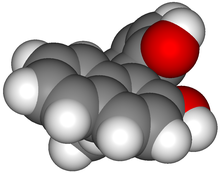 ( R ) -Binol as a three-dimensional representation

Another observable effect is the hindrance of rotation about a single bond within a molecule. The 1,1'-bi-2-naphthol (BINOL) molecule is always in a twisted conformation due to the hydrogen atoms between the two rings (not shown) . It is noteworthy that the steric hindrance prevents the change from the right-handed to the left-handed conformation, which is why these molecules are chiral although they do not have an atomic center of chirality . This phenomenon is called axial chirality .

The inhibiting effects of steric hindrance are used specifically in the context of multi-stage syntheses. If there are several functional groups in a molecule that could be involved in a certain reaction, one of these groups can be shielded and thus protected by steric hindrance. Well-known protecting groups are, for example tert- butyl ester and the di- methyl - tert- butyl silyl group.

The prevention of rotation about a bond is particularly used in stereoselective reactions .