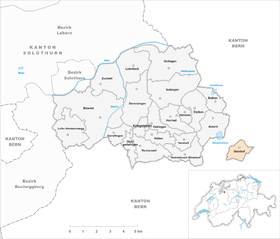 Until December 31, 2011, Steinhof was a political municipality in the Wasseramt district of the canton of Solothurn in Switzerland . The village merged on January 1, 2012 with the municipality of Aeschi .

The Steinhof settlement forms an exclave of the canton of Solothurn and is completely surrounded by the area of ​​the canton of Bern .

Steinhof is 562  m above sea level. M. , four kilometers south of Herzogenbuchsee and 13 kilometers east-southeast of the canton capital Solothurn (linear distance ). The farming village extends in a panoramic location on the northern roof of a hill between the Burgäschisee and the central Önztal , which belongs to the Oberaargau .

The 1.6 km² large municipal area includes a section of the moraine landscape in the outer water authority, which was formed by the Ice Age Rhone glacier . The hill of Steinhof culminates at 595  m above sea level. M. (highest elevation in the municipality). In the west, the municipal ban extends into the Moosmattentäli , in the north to the Neuholz , a forest area on the slope of the hill. To the east the community extends into the 600 m wide valley of the Önz. In its middle section, this flows in a valley that for a long time lay on the edge of the Ice Age Rhone glacier and also served as a lateral meltwater channel for the drainage of the Aare and Emme .

Characteristic and eponymous for Steinhof are around 24 erratic blocks of different sizes, which are still in the area of ​​the municipality today. The stones from the Valais and the foothills of the Alps were brought here from the Rhone Glacier. The largest boulder in the canton of Solothurn, with a volume of 1200 m³, is the Grosse Fluh made of Arkesine gneiss, which occurs in the Val de Bagnes in Valais . Many other blocks were used as building material until the 19th century, before the rest were placed under protection.

In 1997, 4% of the municipal area was in settlements, 29% in forests and woodlands, 65% in agriculture and a little less than 1% was unproductive land.

In addition to the village settlement, Steinhof has a few individual farms.

Up until the second half of the 20th century, Steinhof was a village dominated by agriculture . Even today, arable farming and fruit growing as well as cattle breeding have an important place in the income structure of the population. Some other jobs are available in local small businesses and in the service sector. In the last few decades the village has also developed into a residential community thanks to its attractive location. Many employees are therefore commuters who work mainly in the Herzogenbuchsee and Langenthal regions and in the Solothurn area.

The community is located away from the major thoroughfares; the main access is from Herzogenbuchsee . The village is connected to the public transport network by the BSU bus line , which serves the route from Kriegstetten to Steinhof.

The place was first mentioned in documents in 1201 under the name de Steine . The name Steinäschi has been passed down from 1798 and Steinhof since 1884 . In the Middle Ages, Steinhof was under the rule of Aeschi , later under the Kyburg servants of Stein. In 1466 the village came to the city of Solothurn and was assigned to the Vogtei Kriegstetten. It was not until the Wyniger Treaty in 1665 that the high level of jurisdiction was transferred from Bern to Solothurn. After the collapse of the Ancien Régime (1798), Steinhof belonged to the Biberist district during the Helvetic Republic and from 1803 to the Kriegstetten district, which was officially renamed the Wasseramt district in 1988.

See also : List of cultural assets in Aeschi SO

The Mother of God Chapel on the southern edge of the village was built in 1720 and restored for the last time in 1970. Steinhof belongs to the parish of Aeschi (SO). The Grosse Fluh boulder is located south of the village .

In yellow on a green three-mountain, black right-handed ibex

Commons : Steinhof SO  - Collection of images, videos and audio files

Political communities in the district of Wasseramt