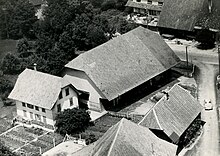 Junction of Biberiststrasse and Hauptstrasse, aerial photo from 1965

Old postcard from around 1920

Derendingen ( Däredinge in the local dialect ) is a municipality in the Wasseramt district of the canton of Solothurn in Switzerland .

Derendingen is at 439  m above sea level. M. and 4 km east-southeast of the canton capital Solothurn (linear distance). The village extends on the gravel plain east of the Emme , on the Grüttbach , which flows parallel to the Emme , in the Solothurn Mittelland .

The 5.6 km² large municipal area includes a section of the groundwater-rich gravel plain in the inner water authority and shows only slight differences in relief. In the plain east of the Emme, which has been running in a canalised river bed since the 19th century, the community area extends north to the old factory workers' settlement of Elässli and in the Affolterwald to the Luterbach motorway junction, to the east over the A1 motorway to the Edge of the settlement area of ​​Subingen, and in the south it includes the Eichholz forest cut by the motorway . In the west, the area extends over the Emme to the Dittiberg , on its steep eastern slope at 460  m above sea level. M. is the highest point of Derendingen.

In 1997, 31% of the municipal area was in settlements, 27% in forests and woodlands, 41% in agriculture and a little more than 1% was unproductive land.

The district of Oberdorf ( 445  m above sea level ) in the plain between the Grüttbach and the Eichholz south of the village belongs to Derendingen . After the construction of new residential areas, the two districts have grown together to form a single large settlement. There are industrial and commercial areas along the Emme and the Emme Canal as well as in the eastern part of the village.

Politically, Derendingen was a social democratic stronghold for a long time . In the 1997 elections, however, the SP lost an absolute majority in the municipal council. In 2005 the FDP achieved the same number of seats as the SP for the first time, and the social democratic community president Urs Aerni was voted out of office. In the 2009 elections, the Liberals succeeded in overtaking the SP. For the legislative period from 2013 to 2017, no more candidates from the SVP stood for election due to a lack of members. Instead, the SVP recommended that its voters vote for the FDP.

The eleven seats in the municipal council are distributed among the parties as follows:

The Mayor of Derendingen has been Kuno Tschumi of the FDP since January 1, 2006.

Until the second half of the 19th century, Derendingen was a village dominated by agriculture . After that, the place experienced rapid industrialization , with the focus on the textile industry.

Today Derendingen offers around 2,400 jobs. With 2% of the gainfully employed who are still employed in the primary sector, agriculture (predominantly arable farming and forestry ) only has a minor role in the employment structure of the population. Around 53% of the workforce is employed in the industrial sector, while the service sector accounts for 45% of the workforce (as of 2001).

In the 19th century, several industrial companies were established on the right side of the Emme on the Emme Canal, above all a worsted spinning mill belonging to the Schoeller'sche worsted yarn spinning mill (1872) and a cotton spinning mill. In the second half of the 20th century, a larger commercial and industrial zone developed on the eastern edge of the village next to the motorway. Over time, the economic structure diversified, so that today many different industries are represented in Derendingen. This includes companies in mechanical engineering, electrical engineering, the construction industry, information technology, plastics processing, metal construction, precision mechanics as well as various mechanical workshops and graphic studios.

Jobs in the tertiary sector can be found primarily in administration, in education (the municipality is the location of the Derendingen-Luterbach upper secondary school center), in sales, in gastronomy, in banking and insurance as well as in engineering, architecture and fiduciary offices. The village has also developed into a residential community. In addition to numerous commuters, many employed people are commuters who mainly work in the Solothurn region.

The Derendingen trade association was founded in 1921.

The community has good transport links. It is located on the main road from Solothurn to Herzogenbuchsee . The closest connections to the A1 (Bern-Zurich) and A5 (Solothurn-Biel) motorways are around 2 km from the town center. The Luterbach junction, where the A5 joins the A1, is located in the northeast of the municipality.

On June 1, 1857, the railway line from Herzogenbuchsee to Solothurn was put into operation; Derendingen station was inaugurated in 1864. The line, which was closed for passenger traffic from 1992 , is reactivated today as part of Bahn 2000 , but is not used by regional trains. Derendingen is connected to the public transport network through the bus lines of the Busbetrieb Solothurn und Umgebung (BSU), which operate the routes from Solothurn to Herzogenbuchsee and from Solothurn to Recherswil .

The community area of ​​Derendingen was inhabited very early. Individual remains from the Bronze Age and traces of settlement from a Roman estate were discovered. There was also a settlement in the early Middle Ages.

The place was first mentioned in a document in 1264 under the name Teradingen . The names Therendingen (1291), Deredingen (1295) and Terendingen (1366) appeared later . The place name goes back to the Old High German personal name Tarut and with the ending -ingen means something like the people of the Tarut .

Derendingen was subordinate to the Counts of Buchegg in the Middle Ages , before the rights of domination were transferred to the Sankt-Ursen-Stift in Solothurn in 1347. Since the early 15th century, the city of Solothurn held the lower jurisdiction and assigned Derendingen to the Vogtei Kriegstetten. The high level of jurisdiction remained with Bern until 1665, after which it also came to Solothurn. After the collapse of the Ancien Régime (1798), Derendingen belonged to the Biberist district during the Helvetic Republic and from 1803 to the Kriegstetten district, which was officially renamed the Wasseramt district in 1988.

In the second half of the 19th century there was a rapid development from a farming village to an industrial community. Since the water power of the Dorfbach (Grüttbach) was too low, part of the water from the Emme was diverted into a canal and led parallel to the river. The first new business was a wool factory founded in 1850. The actual industrialization began with the establishment of the Emmenhof cotton spinning mill in 1861. It employed up to 300 people, but had to cease operations in 1933. As early as 1872, Rudolf Wilhelm Schoeller founded the branch of the worsted yarn spinning mill Schoeller & Lang on the border with Luterbach, which was soon supplemented by a worsted yarn weaving mill. These two factories, which provided work for numerous people, led to the striking population growth in Derendingen from 1850 to 1900 (five-fold increase in the number of inhabitants). The workers' settlement "Elsässli" was built for the workers and is now a listed building. Since the end of the 19th century, Derendingen's settlement focus has shifted more and more from Oberdorf north to the streets that led to the bridge over the Emme.

The All Saints Chapel in Oberdorf , which was given its present form when it was rebuilt in 1724, was Derendingen's only church for a long time. The village was part of the parish of Kriegstetten until 1933. The Reformed Church was consecrated in 1899, while the Catholic Church was not built until 1933. The Emme Canal industrial trail leads to numerous industrial plants from the 19th and the beginning of the 20th century.

In Derendingen there is also the public library for adults in the Mitteldorf schoolhouse .

Derendingen has a tennis hall, the only specialized indoor facility in the Wasseramt district. Furthermore, a floorball team and a football club (SC Derendingen) are based in Derendingen.

Commons : Derendingen SO  - Collection of pictures, videos and audio files

Political communities in the district of Wasseramt