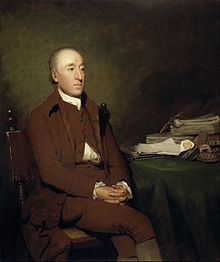 James Hutton (born June 3, 1726 in Edinburgh , † March 26, 1797 ibid) was a Scottish naturalist and geologist . He is considered one of the founders of modern geology, especially the idea of ​​the cycle of rocks and actualism (with Karl Ernst Adolf von Hoff and Charles Lyell ).

Hutton was the only son of the merchant (and former treasurer of Edinburgh) William Hutton and the merchant's daughter Sarah Balfour. His father died in 1729, but left the family in wealthy circumstances. Hutton attended high school in Edinburgh and studied from 1740 at the University of Edinburgh humanities, including logic with John Stevenson and mathematics, physics and geography with Colin MacLaurin . After that he was briefly an apprentice to a lawyer in 1743, which he did not like. During his studies his interest in chemistry was awakened and he studied the closest practical subject, medicine, in Edinburgh from 1744 to 1747. In 1747 he went to Paris for two years, where he studied anatomy and chemistry, among others with Guillaume-François Rouelle , who also gave lectures on geology and mineralogy. In 1749 he earned his MD in medicine in Leiden . From the end of 1749 he was in London for several months before returning to Edinburgh.

According to some sources, he practiced as a doctor for a number of years . According to other sources, he tried in vain to gain a foothold as a doctor in London in 1749 before he turned away from medicine and began with his friend John Davie to produce important ammonia substances , especially as fertilizer (according to a process that both had previously developed in Edinburgh had) and to work with it as a “scientifically interested farmer ”. He had inherited a small farm in Slighshouses 40 miles south-east of Edinburgh from his father, but before that he was still an apprentice on a farm in more advanced England (near Yarmouth , Norfolk ) in 1752/53 , where he also traveled to other farms on longer journeys visited in England and in 1754 in northern France, Holland and Belgium. By studying the soil, he became interested in geological phenomena and soon began to read “rather rocks than books” (quoted by Warren Carey ). He spent the next fourteen years from 1754 to 1768 when he moved to Edinburgh as a farmer doing scientific studies. In 1767 he became a member of a commission for a canal construction project between the Forth and Clyde rivers. In Edinburgh he participated in social life and associated with scholars such as Joseph Black , James Watt , John Playfair (all three of whom became his close friends) and Adam Smith . In 1774 he traveled to England and Wales, where he visited mines with James Watt and through this probably also made contacts with the Lunar Society in Birmingham - he was later in correspondence with Erasmus Darwin and Matthew Boulton . Hutton was very active in the Royal Society of Edinburgh, founded in 1783, and from 1788 a member of the Royal French Academy of Agriculture. His first little book on a geological topic appeared in 1777 (Considerations on the Nature, Quality, and Distinctions of Coal and Culm). In the 1780s he made several longer geological study trips to England, Scotland and the Isle of Man, but this stopped at the end of the decade as he became increasingly sickly (he had bladder stones). In 1795, at the insistence of his friends, he published his major work Theory of the Earth . A book on Agriculture ( Principles of Agriculture ) was planned, but he died before that.

He was never married, but had an illegitimate student son with whom he also kept in contact. His three sisters last ran his household.

Hutton is considered to be the founder of geology as a science and ultimately also of geochronology . Because he was the first to name the gap between the human and geological timescale , and that humanity and creation must be older than had been calculated from the Bible up to now (see the year 5508 BC ). The same geological processes that can be observed today must also have worked in the past ( actualism ). Therefore, direct conclusions from today about the earlier processes would be possible. These processes fit into a cycle of rocks alternating between erosion and sediment deposition, for example in seas and volcanic uplift, which has lasted for ages - the first chapter of the first volume of his main work closes with the words, we find no signs of a beginning and an end . This also corresponded to his deistic worldview - God had arranged the world according to his plan, but afterwards no longer intervenes directly. The earth was like a well-planned machine or an organism endowed with self-sustaining powers.

The road to this "new image of the Earth" was to study Scottish limestone - layers than that Hutton on the seabed recognized resulting deposits which solidified by pressure. Something similar could be developed for sandstone and slate . At Siccar Point on the east coast of Scotland , he and his friend and student John Playfair found a two-colored cliff, the lower dark part of which he called "Schistus". This shale layers of the Silurian were folded and almost vertically placed, while the above it red Oldred - Sandstone of Devon was horizontal. According to Hutton's reflection, the Schistus had been tipped over after its formation, so that the sand later deposited on it was - as they say today - discordant to it.

Hutton and his pupil Playfair also gave first estimates of the mean density of the earth, which resulted in 4.5 and 4.9 g / cm³ (true value 5.52).

Theory of actualism and plutonism

In 1785 Hutton gave his first lectures on his theory in the Royal Society of Edinburgh (published in their treatises in 1788 and in a pamphlet from 1785, which he privately printed and circulated with friends). In 1795 he published his main work in two volumes Theory of the Earth (drafts for other parts of the book did not appear as Part III until 1899). In it he emphasizes the importance of slow but constant geological processes that shape the surface of the earth . He also developed the concept of actualism : All geological phenomena can be explained by changes that can be observed today and that extend over long periods of time.

The prevailing opinion up to then, however, was shaped by the appearance: the seemingly stable mountains , but also gorges and volcanoes, given their often enormous dimensions, must have been created by sudden catastrophes . This cataclysmic theory was finally refuted by Charles Lyell only 70 years later .

Hutton represented views of plutonism , a direction that was involved in violent arguments on the continent with the representatives of Neptunism ( Abraham Gottlob Werner ). But since he also recognized rock formation through marine deposits, he took a middle position in the dispute at that time, according to his friend John Playfair. However, he was severely criticized by the Neptunists of his time and also by the church, for example because he rejected the idea of ​​the Flood.

In addition to rocks of volcanic origin, he also distinguished deep rocks of intrusive origin such as granites , which according to him crystallized from a magma melt. Here, too, as in the rest of his work, he only drew his conclusions after careful observation, if possible on site - in this case of granites near Glent Tilt near Aberdeen in Perthshire 1785 ( Observations on Granite , Transactions Royal Society Edinburgh, Volume 3, 1794, p. 77 -85). One could clearly see how the red granite had broken into the crystalline slate above. He also represented the idea of ​​rock transformation ( consolidation ), which Charles Lyell later called metamorphosis .

Hutton's writings found their way to Germany and France as early as the 1780s and influenced the discussion there. His lecture Theory of the Earth , published in 1788, appeared in German translation in 1792. Of particular influence was the presentation of Hutton's theory by his friend John Playfair ( Illustrations of the Huttonian theory of the earth , Edinburgh 1802), through which, for example, Charles Lyell got to know Hutton's theory. It was only with this book that Hutton's theory became known to wider circles, with Playfair pushing back Hutton's deist speculations in favor of scientific facts. John Playfair also wrote Hutton's biography.

Hutton was also active in exploring the earth's atmosphere . With his climate studies he clarified the meteorological requirements for precipitation.

Hutton dealt only marginally with fossils. 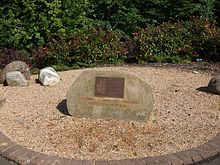 Memorial plaque in the Hutton Memorial Garden in Edinburgh

In honor of Hutton, the Hutton Memorial Garden was laid out on St. John's Hill in Edinburgh in 2001/2002 , a small garden designed with various types of boulder. A memorial plaque is attached to one of them. In addition, the Hutton Mountains , a mountain range in Antarctica, have borne his name since 1968 . The moon crater Hutton , the Mars crater Hutton and the asteroid (6130) Hutton are named after him.

The painter J. Clerk accompanied Hutton on excursions and made drawings that were planned for the last part of Theory of the Earth , but were not rediscovered until 1978.