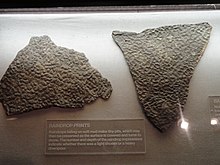 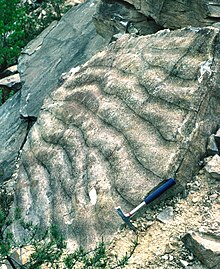 Fossil ripple marks on a layer surface in the Bavarian Haßberge

Recent ripple marks on the beach in Borkum

The principle of uniformity of processes states that the geological processes of the present do not differ from those of the geological past. This assumption forms the theoretical basis for drawing direct conclusions about past geological processes using a comparative ontology of current geological formation processes. If, for example, structures are found in sedimentary rock that resemble those in today's sediments (e.g. ripple marks ), it can be deduced from this that the fossil structures formed in the rock in the same way as the more recent ones in the sediment and are therefore the same Type of sediment structure.

Thus, actualism represents a special case of a general scientific rule, the principle of simplicity . It states that one should not use additional or unknown causes to explain a phenomenon as long as known causes are sufficient. The opposite of the actualistic method is exceptionalism .

The axiom of the uniformity of laws is still more general . It is assumed here that the same laws of nature rule and have ruled everywhere and at all times. Like every axiom, it cannot be proven in principle, but without this basic assumption, scientific work would be impossible from the outset.

Actualism as a hypothesis has been challenged several times, most recently by the proponents of historicity . This term states that the laws of nature may have changed with the conditions in geological time periods. So we would measure today with a yardstick that would have changed over time.

Theoretical physics, however, assumes a permanence and constancy of the laws of nature. The variability of the initial and boundary conditions of geological processes in the course of the earth's history is therefore sufficient to explain the phenomena occurring in geological tradition that have no current counterpart.

Apart from a few forerunners ( Georg Christian Füchsel , Georges-Louis Leclerc de Buffon ), actualism was first formulated in 1788 by James Hutton (1726-1797) in his Theory of the Earth and then by Charles Lyell in his main work Principles of Geology (1830 ) further developed. However, Lyell confused these methodological approaches, which were never doubted even by his opponents, in a skilful (but inadmissible) manner with his theory of the uniformity of change ( gradualism ). In contrast to the then still prevailing explanatory model of catastrophism , Lyell believed that there had never been phases of increased geological activity in the history of the earth, such as increased volcanism, special phases of mountain formation or a bursty, accelerated development of living beings. Even extensive upheavals of the earth can only be explained by the slow accumulation of innumerable small events that gradually accumulated over vast periods of time. Lyell also represented the uniformity of states. For example, he contradicted the then (and now) prevalent view that the earth must have solidified from a formerly glowing liquid state, and maintained that the relationship between the continental crust and the ocean basin remained constant.

Due to Lyell's rhetorical skills, his gradualist views were quickly adopted by broad circles, and Georges Cuvier's catastrophic cataclysmic theory in particular was almost completely pushed back by 1850. Although Charles Darwin in his theory of evolution also assumed a very slow development of living beings in imperceptibly small steps and thus contributed considerably to the general acceptance of gradualism, it cost Lyell great effort to accept Darwin's theory. In his opinion, the emergence of completely new biological species implied a far too great (because irreversible) change in the course of the earth's history. It was only towards the end of his life that Lyell gave in under the overwhelming burden of evidence and joined Darwin's theory on the directed development of living things. Likewise, Lyell was later forced to accept the ice age theory of Louis Agassiz . In his research into the glaciers, he also used clear, actual methods, but as a student of Cuvier he remained a follower of disaster theory.

Lyell's contemporary Karl Ernst Adolf von Hoff recognized in his work History of the Natural Changes in the Earth's Surface Proven by Tradition (1822–1834) that actualism as a scientific method is inevitable, but that it occasionally reaches its limits as a theory . Hoff was of the opinion that special hypotheses could sometimes be used to explain earlier processes, but only if observations of current processes and forces were insufficient. Because of the success of Lyell's gradualism, however, such approaches have largely been forgotten.

It was only in the course of the 1960s and 70s that various authors, such as Reijer Hooykaas , Stephen Jay Gould , Martin Rudwick and Roy Porter , again critically dealt with the ambiguous concept of uniformity, especially the separation of the (axiomatic) method from the (refutable) Theory worked out. This subsequently facilitated the “renaissance” of catastrophic theories about the course of the earth's history, such as the interpretation of the worldwide iridium anomaly as a result of a meteorite impact on the Cretaceous-Tertiary border.

The interpretation of archaic tectonics provides an example of the limits of the actual actualistic method . For this it is necessary to fall back on laboratory experiments, because in the Archean, the rocks of the earth's crust had not yet separated into the continental and oceanic crusts that can be observed today, and thus could not yet behave according to the laws of today's tectonics. The oxygen content in the archaic atmosphere was also so low that huge deposits of iron minerals could form as a result , the banded iron formations , the formation of which would be completely excluded today. As a general rule, as the distance from the present increases, an up-to-date interpretation of geoscientific findings becomes more and more uncertain.