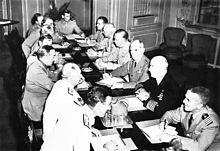 Combined Chiefs of Staff in Quebec , 1943

The Combined Chiefs of Staff (CCS) were a joint US and UK operations and planning staff during World War II . It was founded on January 14, 1942 at the Arcadia Conference of the two Allies . The official seat was in Washington, DC

The Combined Chiefs of Staff included the chiefs of staff of all branches of the US armed forces and the British armed forces , who were mostly represented by permanent delegates ( British Joint Staff Mission ). The CCS were also directly subordinate to US President Franklin D. Roosevelt and Great Britain Prime Minister Winston Churchill and participated in all discussions and conferences. The main task of the CCS was the implementation of the strategic and military decisions in concrete plans and the resulting instructions to the Commander-in-Chief Dwight D. Eisenhower in Europe and Douglas MacArthur and Chester W. Nimitz in the Pacific. In addition, the CCS was responsible for coordinating the secret service operations . For the theaters of war in Europe and the Pacific , the CCS planned the supplies, divided the troops for the operations, controlled the armaments and were responsible for the administrative control of the conquered areas.