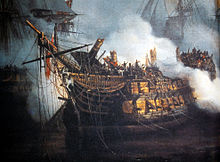 The Bucentaure at the Battle of Trafalgar

On November 6, 1804 Vice Admiral Pierre de Villeneuve was officially assigned to the Bucentaure and had his flag hoisted on this ship. It took part in the Battle of Trafalgar on October 21, 1805. At that time it was commanded by Captain Jean-Jacques Magendie . In this sea battle, the Bucentaure had a not inconsiderable influence on the fighting, which was as follows:

Napoleon Bonaparte ordered Vice Admiral Pierre de Villeneuve, who was anchored in Cadiz , to sail to Naples with his subordinate fleet in order to take 12,000 soldiers on board. Villeneuve followed this order only very hesitantly, because a few British warships of Vice Admiral Nelson's fleet crossed off Cádiz . Since Villeneuve threatened to be relieved of his command if he refused to give orders, he bowed to the order and let the united Napoleonic fleet, consisting of French and Spanish ships, leave the port of Cádiz on October 19, 1805, which was due to unfavorable winds and poor navigational skills Ship crews lasted until noon the following day. 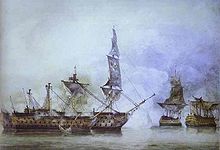 The Victory in action with several French ships of the line

Since the British frigate Sirius had observed the departure of the enemy and immediately reported it to Nelson, Nelson was able to work out a battle plan.

On October 21, 1805, at 6:40 a.m. , he had the signal set on his flagship, the Victory , to take up the agreed sail formation. His plan was to sail towards the Franco-Spanish enemy in two lines and to cut the opposing battle formation. The Victory should lead the northern line and the Royal Sovereign the southern line. Both lines then sailed eastwards towards the enemy traveling south.

Villeneuve, however, who wanted to keep the possibility of an escape to Cádiz, gave his French-Spanish fleet the order to turn around at 8:00 a.m. Since the wind was weak and the crews were inexperienced and not coordinated with one another, the traditional order of battle, namely sailing in a keel line in the wake of the person ahead, was completely mixed up. The maneuver was finally completed at 10 o'clock, so that Villeneuve's ships were now on a northerly course - but there were now large gaps in the ranks when both opposing fleets met at right angles. The French fleet could not use the tactical advantage of " Crossing the T ".

The Commander in Chief's flag was hoisted on the Victory , which is why Nelson and his staff assumed that the enemy would do something to set it as a preferred target and fight it. For this reason, the Temeraire drove slightly offset to port in front of the Victory in order to secure her. The British flagship wanted to push into the small gap between the French Bucentaure and the Spanish four-decker Santissima Trinidad and came under the heaviest fire. At 12.20 p.m. the Bucentaure opened fire on the Victory and was able to shed three broadsides on the British flagship, which caused it to lose its main bullsail . Nelson's ship then stood in the crossfire of the Héros , Santissima Trinidad and Redoutable for 40 minutes without being able to return the attack. It was only at 12:45 p.m. that the Victory managed to break through the enemy line and approach the Bucentaure . 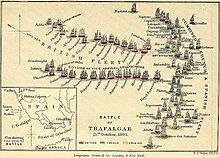 The ship constellation and order in the Battle of Trafalgar

At 1 p.m., the Victory was able to record the first hits on the French Bucentaure with its artillery . The Victory fired a broadside into the transom - the weak point of warships at the time - and was able, as Villeneuve later explained, to take out a crew of approx. 400 men and 20 cannons, whereby the Bucentaure was severely weakened after only two minutes in the first battle. Captain Magendie, who sustained a head injury, was among the wounded in this first battle . However , neither sails nor masts of the Bucentaure were hit by the bombardment of the Victory , so that it remained maneuverable.

The Bucentaure was the French flagship of Vice Admiral Pierre Charles de Villeneuve, but it was not marked as such, but only revealed itself as the flagship by hoisting the admiral's flag when the Victory had slowly crossed her stern. The French Neptune then hurried to the Bucentaure 's aid and involved the Victory in a violent firefight, in the course of which the latter received serious damage to the foremast and bowsprit . The Victory then fell off to port, but did not manage to lay directly alongside the Bucentaure .

Now the French Redoutable also intervened and in turn attacked the Victory , which was now attacked by three ships at the same time. Captain Thomas Masterman Hardy of the Victory then decided to leave the battered Bucentaure behind and instead concentrate the fire on the redoutable .

The Bucentaure continued on its course without being fought by the Victory any further - however, the British Neptune took up their pursuit, which they could catch up later. Finally, after three hours of fighting , the Bucentaure could be captured by the British ships Neptune , Leviathan and Conqueror , so that Vice Admiral Villeneuve was forced to drop his flag . He surrendered to Captain James Atcherly of the British Conqueror .

Whereabouts of the ship

The Bucentaure was taken over by a British prize garrison after the lost battle . In fact, the captured French crew managed to take the prize crew by surprise and recapture their own ship. Despite all the effort, the Bucentaure sank in a storm on October 23, 1805.

Composition of the Bucentaure crew

The functional composition of the Bucentaure's crew is as follows: