As fleet conferences three major international conferences are maritime powers in the interwar period referred to with questions of naval armament employed: the Washington Conference 1921-22 the London Conference in 1930 and the London Conference 1935/36. Another unsuccessful conference was held in Geneva in 1927. The contracts concluded set upper limits for the number of ships in the participating countries as well as constructive restrictions on individual ship types in order to prevent an arms race . The treaties lost their effect with the Second World War .

The Royal Navy had hardly started extensive naval armament during the First World War ; in most cases only the pre-war programs were completed. After this war another arms race loomed. This time the threat to Great Britain did not come from the German Reich , whose modern battle fleet had sunk itself in Scapa Flow , but from overseas: Both the USA and Japan had significantly increased their stocks of combat ships and were apparently willing to continue to catch up with the Royal Navy. Even the US construction program of 1916 with ten modern battleships and six battlecruisers would have put the British fleet in the shade, at least qualitatively, and in 1919 the US Congress approved Woodrow Wilson's request for six more battleships.

In Japan, the "8: 8 program" was approved in June 1920 (and corresponding construction contracts were issued), according to which two squadrons with 8 capital ships each were to be kept in service, the ships being replaced by newbuildings after 8 years. Great Britain responded in the summer of 1921 with a series of four newly developed battlecruisers, which were to be followed by four more battleships. A new arms race threatened to become as ruinous as the German-British one before 1914. The British Empire would probably no longer have been able to cope with this arms race after the bloodletting of the First World War.

The Washington, Geneva and London Conferences 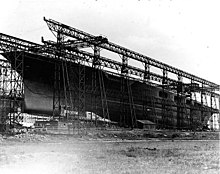 According to the contractual agreements, the USS Lexington was not allowed to be completed as a battle cruiser and was therefore redesigned as an aircraft carrier.

In this situation, the newly elected government under US President Harding sounded out the possibilities of a naval disarmament conference with the major naval powers. The governments of Great Britain , France and Italy agreed; The government of Japan hesitated only after some hesitation, as it feared that it would be taken advantage of by major Western powers.

On November 12, 1921, the Conference of the Five Great Sea Powers met. Many of the US proposals were incorporated into the treaty relatively quickly. Important points of the contract signed on February 6, 1922 read:

There were still certain exemptions that allowed Great Britain, for example, to build two new battleships ( Nelson and Rodney ) immediately , as well as France and Italy to begin replacing obsolete ships in 1927. The "non-fortification clause" was included in order to win Japan's approval to replace the British-Japanese alliance with a new " four-power pact " in the Pacific . Through this pact, the four powers USA, Great Britain, France and Japan guaranteed their possessions in this region.

The Washington Naval Treaty was the first disarmament treaty in modern times. In the following years, however, it became clear that the individual sea powers were more or less distant from the "spirit of disarmament": In the smaller classes of ships, for which the total tonnage was not limited, a new arms race soon began - this time with the cruisers. The US President Calvin Coolidge therefore convened a new naval armament conference in Geneva in February 1927 . This was quite a failure: France and Italy didn't even take part because they didn't want to be restricted any further; and Great Britain, with reference to the extensive overseas areas of responsibility of the Royal Navy, demanded a number of cruisers which the US delegation was not willing to accept. The conference broke up with no result.

In order to get the problem with the arms race in the cruisers under control and to gain clarity as to how the fleet armament should continue after the end of the ten-year construction break agreed in Washington, delegations from Great Britain, the USA and Japan entered on January 22, 1930 London together. France and Italy only took part as observers; both felt unjustly set back in 1922. The April 22nd treaty stipulated:

US battleship USS Florida in Kiel in 1930 before it had to be scrapped due to the London Treaty.

Great Britain, after the experiences of the First World War anxious to abolish the submarine weapon completely, was pleased that at least this last point was accepted by all five sea powers. However, British naval supremacy continued to crumble, as France and Italy did not succeed in setting a maximum limit for cruisers and smaller units. Instead, all naval powers went over to the increased construction of light cruisers. After all, the three great sea powers saw themselves freed from the financial burdens of capital shipbuilding for another six years; Japan was reluctant, however, as it was already preparing its expansionist policy in East Asia . Not least because of the refusal of France and Italy to impose further restrictions, the treaty contained clauses that made it possible to cross the Washington borders in the event of the armament of other states.

Great Britain called the next conference of the great sea powers in late 1935. It was not a lucky star right from the start: Japan left the League of Nations in 1933 and, with the invasion of Manchuria since 1931, left no doubt about its ambitions. At the end of 1934 Japan terminated the Washington and London treaties in due time for the end of 1936. Japan did send a delegation to the conference; However, this left prematurely when its demand for full parity with the Anglo-Saxon sea powers had been flatly rejected. Hitler had proclaimed military sovereignty on March 16, 1935 and armed all three branches of the armed forces . Mussolini refused to allow Italy to participate because of the League of Nations sanctions because of his actions in Abyssinia (see also Italo-Ethiopian War (1935-1936) ).

So while the third and fifth largest sea power was no longer to be expected at the conference, the maritime “have-nothing” Germany set out to blow up the international naval system - in view of the German armaments, it was unlikely that France would become more Would find contractual ties. In an effort to maintain a system of arms limitation at least in some way, the British government concluded the German-British Naval Agreement with Hitler on June 18, 1935 , which limited the German fleet of surface ships to 35% of the British. 35%, however, corresponded exactly to the proportion (ratio of 1.75 to 5) that had been set for France and Italy in 1922. The aspired integration of Germany into the international system of Washington and London consequently failed because of the objection from France.

The only three signatories to the contract agreed:

Some less important adjustments have also been made for small ships. The last point mentioned was directed directly against the German armored ships - no other navy owned ships with the specified specifications. Those in charge of the German Navy could be indifferent to this - they had no plans to build further ironclad ships of this type in any case - but they felt that the rejection of the international conference confirmed them.

In a series of bilateral treaties, Great Britain subsequently tried to bind smaller sea powers to the treaty, for example on July 17, 1937 with the Soviet Union and on the same day with Germany, which recognized the qualitative provisions. Italy also joined on April 16, 1938 (details here ). Since it was unclear what kind of building policy was practiced in Japan, the signatory states of the treaties agreed on June 30, 1938 to raise the maximum limit for battleships to 45,000 ts and 40.6 cm guns.

The collapse of the arms control system

When the last naval treaty was signed in June 1938, the Washington system was already in complete dissolution. France and Italy, competing in the Mediterranean , began an arms race that was intensified by the construction of the German fleet from 1935 onwards. Alarmed by the Japanese approach and the secrecy of the size of the newly laid down Japanese ships, the USA and Great Britain finally began to put new series of battleships and other combat ships under construction. The arms race had begun and buried a system that suffered from the start that there was no real will to disarm anywhere - no sooner had a limit been set for one type of ship or a construction freeze agreed, the next smaller was built in rows; Exceeding the tonnage limits for the individual ships was considered a peculiar offense anyway.