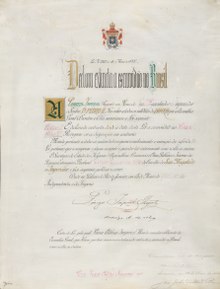 With the Lei Áurea ( Portuguese for Golden Law ) was in 1888 Brazil the slavery abolished.

As early as 1871, the Lei do Ventre Livre (“Law of the Free Belly”) stipulated that children born to slaves should be free in the future. In 1885, in the Lei dos Sexagenários ("Law of Sixty Years"), all slaves over the age of 60 were released.

Princess Isabella with the cabinet members responsible for the Lei Áurea, 1888

In Brazil in the 1880s there was a controversial discussion about the abolition of slavery , after the "Brazilian Society against Slavery" ( Sociedade Antiescravidão Brasileira ), which played a key role in the abolition of slavery in 1888, was founded in 1878 by the MP Joaquim Nabuco was. José do Patrocínio wrote the declaration of political goals and intentions of the abolitionists, which was made public in 1883 as the Manifesto da Confederação Abolicionista . Liberal politicians, who were often shaped by Masonic ideals, campaigned for abolition. In addition, there was the late support of the farm owners, who increasingly resorted to European immigrants as workers, since there was no duty of care for them and wage labor proved to be cheaper than owning slaves. This also accommodated the racist attempt by the government, which intended to increase the proportion of fair-skinned people through a process of branqueamento .

Proponents of slavery also came under pressure from the increasing flight of slaves. Runaway slaves gathered in so-called quilombos , in which they lived together and prepared attacks on farms. During this time, the army was mostly busy catching runaway slaves and bringing them back to their owners.

All of these difficulties resulted in the abolitionists gaining the upper hand and slavery abolished in 1888.

The text of the Lei Áurea was written by the Minister of Agriculture Rodrigo Augusto da Silva . The Lei Áurea consisted of only two articles:

Article 1: It is proclaimed that from the date of this law, slavery is extinguished in Brazil.
Article 2: All orders to the contrary are annulled.

On May 12, 1888, the Brazilian Senate adopted Act No. 3353. On May 13, 1888, the regent Princess Isabella signed the law, which was promulgated by the imperial palace with great sympathy of the population in Rio de Janeiro and published in the Diario official on May 14, 1888 . She was able to sign because her father, Emperor Dom Pedro II, was in Europe at the time . Isabella was popularly given the honorary title A Redentora ("the Redeemer") and was given by Pope Leo XIII. honored with a golden rose .

With the signing of the law, Brazil was the last western country to abolish slavery. Around one million slaves have been released by law. May 13th was declared Dia do Mulato ("Day of the Mulatto ") and is still celebrated today. The Lei Áurea also had an impact on the proclamation of the republic in 1889, as it alienated the large landowners from the empire.