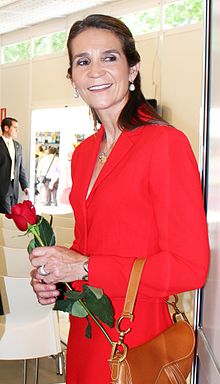 From 1987 to 1990 she studied sociology and education at the University of Exeter in England. In 1993 she graduated from Comillas University in Madrid with a degree in Education .

Elena married the Count of Ripalda's son, Jaime de Marichalar y Sáenz de Tejada , on March 18, 1995 in the Cathedral of Seville . On the occasion of the wedding, Juan Carlos awarded her the title of Duchess of Lugo.

The couple has two children:

In 2003 the Infanta had a miscarriage.

Like the entire Spanish royal family, she is excluded from the British succession because she is Catholic.

On November 13, 2007, the separation of the couple was announced in Spanish newspapers. The divorce was announced two years later, on November 14, 2009, and took place on January 21, 2010. According to press reports, the church is also seeking to annul the marriage.

The Infanta has been taking on representative tasks as a member of the royal family for decades. So she made many state visits within Europe, but also to Japan , Argentina and the Philippines .

Elena supports a number of projects with a focus on education and culture. She is particularly interested in the Paralympics . Therefore, she was present at the Paralympics in Barcelona , Atlanta and Sydney to support the Spanish participants.

The Infanta likes to ride and ski.