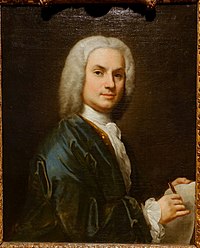 Jacopo Amigoni came across half of Europe in the course of his artistic career. Above all as a portrait and history painter, he became somewhat famous and well known as well as some wealth. 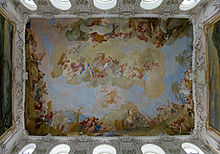 His apprenticeship years led Amigoni from Venice to Flanders, where he dealt intensively with Flemish painting .

Bavaria: Schleissheim, Frauenkirche in Munich and others

His real career began in 1715 when he took up employment with the Bavarian Elector Maximilian II Emanuel .

During his time in Bavaria he created:

The aforementioned large altarpiece Christ the Risen meets his mother is now in the church of the Frauenwörth Abbey on the island of Frauenchiemsee , where it is, however, replaced at certain times of the year by a painting of the blessed Irmengard von Chiemsee .

The copperplate engraver Joseph Wagner became his pupil in Munich . 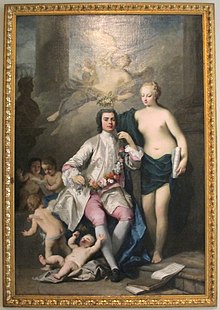 One of Amigoni's paintings showing the castrato Farinelli. It was engraved by Wagner.

Engraving of the above painting by Amigoni. It shows the castrato singer Carlo Broschi, called Farinelli, as a singer crowned by the Muses

In 1730 he went to London and took Wagner there with him. Apparently Amigoni soon got to know the Italian composer Nicola Porpora there and through him came into contact with the most famous castrato singer of the 18th century - Farinelli . He had learned at Porpora and was also committed to London by him. In London, Farinelli, although he was only supposed to stay in the English capital from 1734 to 1735, became the star of the opera stage and not only the best-paid singer of his time, but also the darling of the nobles, who were keen to give him rich presents . It is rumored that Porpora and Amigoni, using Farinelli as a draft horse, also got lucrative and very well paid jobs through him. In any case, numerous portraits of the castrato have been preserved by Amigoni, which are now distributed throughout Europe. His pupil Wagner used some of these paintings to make copperplate engravings; these can also be found in numerous museums and private collections.

In 1739 he returned to Venice. It is said to have been Amigoni who persuaded Canaletto to travel to England, which he undertook in 1746. Other stations in his life were France and Spain.

In Spain he became court painter at the royal court in Madrid in 1747, where he also died five years later. In Madrid there was a reunion with Farinelli, who had entered the service of Maria Luisa Gabriella of Savoy , Queen of Spain, there in 1737 in order to overcome the sadness, or according to today's definition, depression , of her husband, King Philip V. of Spain to alleviate. Even under his successor Ferdinand VI. Farinelli remained employed at the court and was practically Kapellmeister and opera director there. This is how Farinelli made further portraits in Madrid.

Above all, Amigoni created large-format paintings in Madrid on behalf of the Spanish king. Among them are particularly known:

Amigoni's style is characterized in the New General Artist Lexicon ... by Georg Kaspar Nagler as follows:

“It is peculiar in its soft, often indefinite outlines and an occasional yellow shade. According to Lanzi, his better style is that which he acquired in Flanders by studying those masters. There he learned the art of reaching simple black with shadows, and thus, without interfering with the loveliness, to achieve perfect transparency and clarity. "