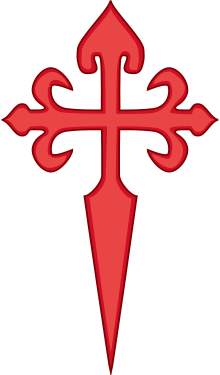 The Santiagoorden (Spanish Orden de Santiago ) was an order of knights whose field of activity was mainly limited to the Christian kingdoms of the Iberian Peninsula . He is one of a number of orders of knights that were founded in the course of the so-called Reconquista .

Its origin is not entirely clear - Rodrigo Arías is sometimes referred to as the founder, but it appears that King Fernando II. De León , before he was formally institutionalized in 1170, gave the city of Cáceres, in Extremadura , Spain , to the Knights , who he feared giving up in his fight against the Moors .

In any case, the order was founded in 1170 by King Alfonso VIII and Pope Alexander III. confirmed by the bull "Benedictus Deus" on July 5, 1175. The bull represented the approval of the rule of the order and unites the most important regulations for the Santiagoritter. Furthermore, the possessions of the community were listed for the first time and confirmed by the Pope.

The main task of the order has been to fight the Saracens since it was founded, as can be read in the Exordium of the different versions of their rule of the order. The legend that the order was founded to protect pilgrims on their way to Santiago de Compostela has no foundation, according to Derek Lomax and other historians. King Alfonso VIII gave them Uclés in 1174 , which has since been the headquarters of the order, and in 1211 Mora and Mira, later united with Osa, Montiel and Alfambra . For a time, the Order maintained its headquarters in Mértola in the Portuguese Alentejo . When the Reconquista in Portugal was over , the Portuguese branch split off, as was the case with the Order of Calatrava , because the knights each felt closer to their “national” king.

The Santiago Knights took part in the Reconquista in the Teruel and Castellón area and fought in the battle of Las Navas de Tolosa in 1212 . The Leonese-Castilian monarchs granted them lands and privileges that allowed the order to rule large regions of Andalusia and Murcia . In addition to the income that the order drew from its agricultural goods and herds of cattle, it achieved bridge, market and road tariffs, rent and enjoyed tax exemption.

Grand Master of the Order

Initially, the Grand Master of the Order of Santiago was elected by the Council of Thirteen, so named because he consisted of thirteen knights chosen from among the governors and commanderies.

The Grand Masters of the Order of Santiago were: 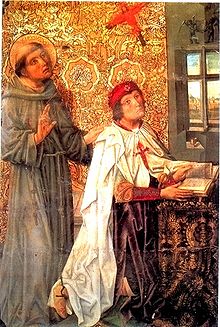 Transition to the Spanish crown 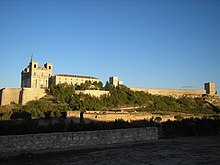 Ucles Monastery in Cuenca, the headquarters of the Order 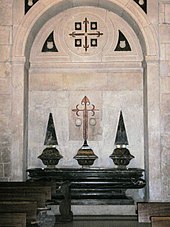 With the end or the slowdown of the Reconquista, the Santiagoorden found itself involved in internal fighting or the civil wars of the nobles in the Kingdom of Castile. In Castile, questions of succession in particular repeatedly led to inheritance divisions and new rivalries, which were often fought out on the battlefield between the Christian nobles. At the same time, the Order felt bound by its immense wealth to support the claims of the crown. Under the influence of these internal struggles and rival cliques, the grandmasters often did not have sufficient dignity. The order was discredited by scandals, so that at the death of the Grand Master Alonso de Cárdenas (1499) the Catholic Kings ( Isabella I and Fernando II ) made a request to the Holy See that the just, divine Providence may put an end to the scandals in one Time when the war against the Moorish kingdom of Granada was taking heavy loads from the crown. That is why they asked Pope Alexander VI. to consider granting them the grand master's administration of the order as compensation for their great sacrifices for the Catholic faith. He complied with her request in the same year by means of a bull in which he conferred the high dignity of the administration of the Order of Santiago on Fernando II. In fact, Isabella I and Fernando II were no longer willing to hand over considerable financial and military power to the high nobility in the form of the knightly orders. They wanted to put these under their control. Scandals came at just the right time. King Fernando, who did not live in marital fidelity and whose readiness to lie was emphasized by his contemporaries, was certainly not a more virtuous alternative to the contemporary high nobility in Santiagoorden.

After Fernando II's death in 1516, Emperor Charles V succeeded him in administration.

Pope Hadrian VI united in 1523 the grand mastery of Calatrava -, Alcántara - and Santiagoorden to the crown of Spain .

The Knights of the Order of Santiago accepted the vows of poverty and obedience and, without exception, organized themselves according to the rules of St. Augustine instead of the Cistercian rules . Members were not required to be chastity, but could get married (some of their founders were married). The bull of Pope Alexander III. however, recommended them to be celibate . The founding statutes of the order state precisely: “ Living in conjugal chastity without sin, they resemble the first parents because it is better to marry than to burn. “The wives of the knights were even considered members of the order in the Santiagoorden.

The costume of the Order of Santiago consisted of a white Augustinian cloak with a sewn red dagger cross (espada) . The coat of honorary members who did not fight was mostly black (see Velázquez Las Meninas ). The Santiago cross can be seen in many places on the Way of St. James and still today in the coats of arms of the places he ruled (e.g. in the Valle de Ricote ).