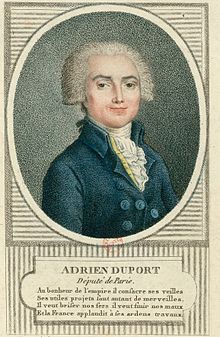 Adrien Duport came from a noblesse de robe family and was born the son of a councilor of the parliament. He studied law, then found employment as a councilor at the Paris Parliament and became an active Freemason. Adrien Duport became known in political circles for his opposition to the financial policies of Calonne and Loménie de Brienne . In the years 1787 and 1788 he made a name for himself as one of the leaders of the “Revolt of the Privileged”. In November 1788, together with Condorcet , he initiated the founding of the " Committee of Thirty ", which had a significant influence on the formation of the " Patriot Party ".

Duport was elected by the nobility of the city of Paris in spring 1789 as a member of the Estates General ( États généraux ). After the Third Estate declared itself a National Assembly on June 17, 1789, Adrien Duport moved to the Third Estate camp eight days later. On September 10, 1789, Antoine Barnave , the brothers Alexandre and Charles de Lameth and Adrien Duport, as leaders of the patriotic majority in the Constituent Assembly , pushed through the rejection of the bicameral system with 849 to 89 votes. Despite the strong support of the Parisian people who demonstrated during the vote "against the veto of one man and for the veto of 25 million", Duport and his political friends changed their original mind. They voted for a right of veto for the king "with suspensive effect" and on the following day the MPs confirmed the king's veto right with 575 votes in favor and 325 against. Duport then played a major role in implementing the judicial reforms. He suggested the formation of peace and jury courts and the Court of Cassation. Adrien Duport also campaigned for the abolition of the death penalty.

Alexandre de Lameth, Antoine Barnave and Adrien Duport concluded a political alliance at the beginning of 1790, which was called the Triumvirate after the Roman model . This triumvirate led and controlled the forty left wing members of the Constitutional Party ( Constitutionnels ). In December 1790 the “left” also agreed to the disarmament and the expulsion of passive citizens from the National Guard. The three million passive citizens included men who paid no or very little direct taxes and were therefore not allowed to vote. Most cities had more passive citizens than active citizens. The latter paid taxes and were therefore eligible to vote. After the passive citizens were politically disempowered (initially until 1792), the triumvirate accused its political competitors, Mirabeau and La Fayette , of betraying the revolution.

Mirabeau's death on April 2, 1791 ended the conflict. The triumvirate then pursued a policy of balancing the reform-willing nobility, the upper classes and constitutional royalty. As a result of the strengthening of the popular movement, the triumvirate pushed for an end to the revolution from May 1791. Barnave, Lameth and Duport called for the abolition of political clubs, the restriction of the freedom of the press, more rights for the king and on June 14, 1791 they advocated the “ Le Chapelier Law ”. They also allowed the priests to hold Catholic masses in their churches again (decree of May 7, 1791). After the failed escape of Louis XVI. on 20./21. June 1791 Adrien Duport left the Jacobin Club and later joined the Feuillants Club founded on July 18 . He was reconciled with La Fayette and fought resolutely for the preservation of the monarchy ever since. In the Constituent Assembly, Duport tried to find a majority for the re-election of its members to the legislature. The latter failed, Duport could not be elected to the legislature in September 1791. Instead, a little later he was elected President of the Criminal Court of the Seine department.

After the declaration of Pillnitz on August 27, 1791, Duport expected an invasion of France by the Prussian and Austrian armies. He feared military defeat and therefore advised the king to make peace in November 1791. Furthermore, he demanded Louis XVI. to form an alliance with Austria. In January 1792, Barnave and Duport wrote a memorandum to Leopold II in which they recommended the emperor to disband the armed emigre associations. Adrien Duport wanted with his policy to strengthen the power of the king, to secure the results of the revolution achieved so far and to prevent the return of the emigrants under the leadership of Count d'Artois . Duport vigorously fought the emerging "war party", a coalition consisting of Girondists and supporters of La Fayette, and tried (ultimately unsuccessfully) to form a "peace party" f. His warnings, but also out of fear, called out warnings, which pointed to the unforeseeable behavior of the people during a war, were ignored.

On May 20, 1792, Duport founded the newspaper "L'Indicateur". This newspaper quickly established itself as the mouthpiece of the wealthy. Duport campaigned for a second chamber of the National Assembly, in which only the wealthy are admitted. The political events after the storming of the Tuileries on August 10, 1792 forced Duport to discontinue his paper. He was arrested on September 3, 1792, during the September massacre. It was only due to Danton's personal intervention that Duport managed to escape to England a few days later.

Adrien Duport did not return to Paris until after the 9th Thermidor II (July 27, 1794). He openly admitted himself to be a supporter of the constitutional monarchy, continued to work for the interests of the wealthy and, despite their general plight, found no understanding for the situation of the dispossessed. After the coup d'état of the 18th Fructidor V (September 4, 1797) Adrien Duport fled to Switzerland and stayed there in secret. He lived to see the occupation of Switzerland by French revolutionary troops and the founding of the Helvetic Republic . A few weeks later, Adrien Duport died on July 6, 1798 in Gais in the canton of Appenzell Ausserrhoden.