This article covers the entire island of Hvar in Croatia. For the town of the same name on the same island, see Hvar (town) .

Hvar [ ˈxʋǎːr ] (Latin Pharina , Italian Lesina , in ancient Greek Pharos ) is a Croatian island in the Adriatic Sea off the Dalmatian coast. It belongs to the Split-Dalmatia County . The elongated island is the fourth largest of the Adriatic islands.

The fortress with the city wall

The island has a mild Mediterranean climate : the average temperature in January is 8.4 ° C and in July 24.8 ° C. The insolation amounts to 2,718 hours of sun per year. The soil composition consists of lime omelanosols , Kalkokombisols, Terra Rosa , Luvisol, lime and Rigol soils. 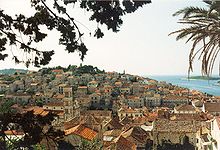 Hvar town, view from the fortress

The first documented colonization took place in 385 BC. BC Greeks from the island of Paros founded colonies on the island. After a short and violent dispute with the long-established Illyrian inhabitants, the colonists gained the upper hand with the help of the warships, triremes that the inhabitants of nearby Lissos (today's Lezha , Albania ) sent them, and founded an independent city-state ( polis ). At that time, Lissos was the seat of the governor of Dionysius I of Syracuse . This battle was the first known sea battle in the Adriatic .

The Illyrians, notorious as pirates at the time, took over in 235 BC. Briefly the rule over the island. In 229 BC As a result of the first Illyrian War, the island of Pharos fell under Roman rule . The Romans left the administration to a former Illyrian ruler, Demetrios of Pharos . However, the alliance between Demetrios of Pharos and the Romans did not last very long. As a result of the defeat in the Second Illyrian War, Demetrios fled in 219 BC. BC to Macedonia and became a close confidante of King Philip V (Macedonia) . Subsequently, the island of Pharos was part of the Roman province of Illyricum .

In the Middle Ages the rulers changed often, as in all of Dalmatia. In the 9th century the island was in the hands of the Narentans . Constantine VII mentions the island in the 10th century as part of the Principality of Pagania . The island of Hvar was under the rule of the principality for three centuries. Around 1180 the prince of Hvar and Brač accepted the supremacy of the Hungarian Empire. However, the Hungarian Empire did not care too much about the coastal areas, so that the inhabitants of the coast soon turned to Venice for protection against the pirates from Omiš , who increasingly threatened the economic sea routes.

In 1278 the inhabitants of the island of Hvar decided to join the Republic of Venice . This decision was crucial for the further development of the island. The favorable location and rule of Venice had a positive effect on the island's economic situation.

From the middle of the 14th century, the island was again under Hungarian rule. After the death of Ludwig I , there were unrest over the succession to the throne between Sigismund von Luxemburg , Tvrtko I and Ladislaus (Naples) . Ladislaus of Naples was crowned Croatian king in Zadar in 1403 . However, he was unable to assert himself against Sigismund and in 1409 sold his legal claims to Dalmatia for 100,000 ducats to the Republic of Venice.

In 1510 there was an uprising under the leadership of Matija Ivanić. The uprising led to a four-year civil war between the plebeians and the nobility. The Republic of Venice only entrusted princes with administrative tasks, which disrupted and damaged the autonomy. The plebeians established a House of Representatives and demanded the official adoption of their decisions, as well as the right to inspect and control the decisions of the noble councils. In addition, the nobility did not shy away from treating the plebeians, and in particular their women and girls, as second-class people, which aroused more and more resentment among the population. The civil war ended bloody and the plebeians were defeated by the nobility. The island prospered for the next 71 years. During the rule of the Venetian Republic, the island experienced its ultimate economic and cultural boom. Until the 16th century the island was one of the most densely populated regions, an important base and trading center.

In writings that were found in a Franciscan monastery on the island, many events are listed on 42 pages, including notes about the attack by the Ottomans as well as the battles of the Ottomans against the Republic of Venice from 1520 to 1617 inclusive. During the wars of Cyprus attacked the Ottomans on August 15, 1517 with 73 warships, under the command of Uluz-Alija and Karakaz. They robbed the residents, took many prisoners and set fire to their houses, the prince's castle, the archives, all the churches and the monasteries. A few months after the Ottomans invaded the island, the plague broke out; two thirds of the population died from it.

On October 1, 1579, lightning struck the island's gunpowder depot and the chain-like explosions destroyed the fortress and many private and public buildings. At the end of the 16th century the island recovered and soon afterwards it was again a rich municipality with a flourishing economy. While the rest of the region suffered from the consequences of the war for Crete , the island was largely spared. The only consequence were the war refugees who settled in the east of the island.

The port of Hvar town

At the beginning of the 17th century, the demographic structure of the inhabitants changed. The Turkish wars , which plagued the region for almost a hundred years, forced the population to move from the unsafe coastal regions on the mainland ( Makarska ) to the somewhat safer islands. The Republic of Venice promised all those who moved from the endangered regions privileges, the so-called “Paštrovačke Privilegije” (named after the Paštrović family from Montenegro , who were the first to receive such privileges in 1423). These were tax exemptions, a form of self-government when the settlers lived in groups, and other benefits. The new inhabitants changed the islands to the extent that Štokavian was spread in the areas they inhabited ; Until then, only Čakavian was spoken on Hvar .

Loggia and clock tower at the port of Hvar

In the 18th century the Republic of Venice found it increasingly difficult to keep up with the West, and so the decline spread, in Dalmatia and thus also on the island of Hvar. In addition, the princes wanted to make as much money as possible in their two-year reign, and the time was therefore marked by abuse of power and embezzlement. The consequence was a cancellation of the free disposal of administrative funds; all surpluses were forwarded to Venice. The island suffered its last blow in the middle of the 18th century when the base of the Venetian fleet was moved from the island of Hvar to the city of Kotor . From then on, Hvar became a common municipality in Dalmatia.

The Republic of Venice was officially dissolved after the defeat by Napoleon Bonaparte with the Peace of Campo Formio in 1797. After centuries under Venetian rule, the island of Hvar was now under the rule of the Habsburgs . With the Peace of Pressburg in 1805, the island came to France in 1806 , as did the rest of Dalmatia. The rule of the French lasted until 1813, after which the island fell back to the Austrian Empire . During the Austrian rule, the island experienced stagnation in its development. The only important event from that time is the opening of the meteorological station in 1858. It was established in the monastery of St. Veneranda and is still there today. This was the first meteorological station in Croatia. The Austrian Empire ruled until the end of the First World War .

Italy occupied the island in 1919 , but Italian rule ended in 1921 with the Rapallo Border Treaty and the unification between Italy and the Kingdom of Serbs, Croats and Slovenes on border issues. During the Second World War , Hvar was part of the Independent State of Croatia from 1941 to 1945 . There were garrisons of the Italian and German armies on the island until the Germans surrendered in 1945 . Until 1991 Hvar was part of Yugoslavia . During the Croatian War , many buildings were damaged by shells, and the island took in refugees from other regions of Croatia.

Agriculture was the economic base of the islanders until the 1950s. The people laboriously created open spaces in the karst landscape, which they used for growing vines, figs , olives , lavender and other agricultural products. They used the countless stones they excavated from the earth to build long dry stone walls or layered them to form cantilevered vaulted structures made of dry stone , the shape of which is reminiscent of igloos.

The island's basic products were wine , olive oil and fish . When the production exceeded the own requirements, the products were marketed on the domestic market. The island had a stable economy that grew steadily until the second half of the 19th century. A crisis arose at the end of the 19th and until the middle of the 20th century. It all began with downy mildew , a grapevine disease. There were also economic difficulties, the chaos of war and political restructuring. When agriculture ceased to exist as the main branch of the economy, the island turned to tourism.

The entire island is very popular with tourists, especially in the summer months. Tourism plays a major role. In addition to tourism and self-sufficient agriculture, the cultivation of lavender and the manufacture of the products obtained from it (e.g. lavender oil and lavender pillows) as well as the pressing of some excellent wines form the basis of life for the population. The island's most famous wines are the Zlatan Plavac and the almost black Faros , which are made from grapes from the Mali Plavac , the best locations for which are steep vineyards on the south side of the island. Even Ivan Dolac , a very dark red wine from the Mali Plavac grape and Bogdanuša (of a very dry sherry recalls) are generated. Fishing, which used to be important, now hardly plays a role.

In July 2019 there was an increased incidence of the octopus (Tremoctopus violaceus), which is very rare in the Adriatic , in the area of ​​the Croatian islands of Hvar, Brač and Šolta . An increased occurrence of the blanket octopus in Dalmatia was last reported in 1936. Characteristic of this octopus is the enormous difference in size between females (up to 2.5 meters) and males (only 2.4 centimeters).

Hvar is connected to the Croatian mainland via ferry connections from Stari Grad to Split and from Sućuraj to Drvenik, as well as via the Rijeka - Dubrovnik coastline .