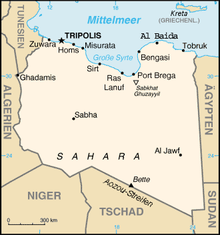 Location of Crete and Libya

The name of the sea region comes from Roman geography and means the sea behind which the provinces Libya superior and Libya inferior lay.

The International Hydrographic Organization  (IHO) does not use the term marine region, which means that it simply represents the free eastern Mediterranean . The expression is still used today to divide the Mediterranean into regions across the board. How the Libyan Sea is delimited as a submarine depends on different definitions of its more separate neighboring seas:

The also still Roman African Sea (Mare Africum) is outdated for this region . More modern one speaks here simply of the Central Mediterranean .

The largest island in the Libyan Sea is Djerba . Other islands in the Libyan Sea are, depending on their delimitation, the Kerkenna Islands and a few small islands near Crete's south coast; the largest and only permanently inhabited of these is Gavdos .

The Libyan Sea is colder than usual in the eastern Mediterranean, especially on the south side of Crete near the shore. This is due to the deep currents prevailing there.