This article describes the Russian city of Arzamas. For the Russian literary society, see Arsamas (literature) .

Arsamas is located on the Tjoscha , a right tributary of the Oka , 112 km south of the metropolis of Nizhny Novgorod . The closest town is Perewos , which is 51 km northeast of Arsamas. 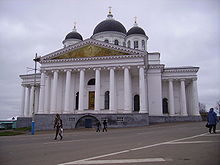 The city was first mentioned as a fortress in the second half of the 16th century. In the 17th century, the place developed the fastest economically because it was near important trade routes. In 1719 Arsamas received city rights and in 1779 became a county seat.

In the 18th and 19th centuries, a number of church buildings were erected in Arsamas, not a few of which have been preserved to this day. For this reason, the downtown area of ​​Arzamas is considered to be one of the most magnificent among Russian cities of comparable size. Among other things, there is the Church of the Nativity of Christ ( Церковь Рождества Христова ) built in 1845 by the famous architect Konstantin Thon in the city .

On June 4, 1988, Arzamas hit the headlines when a train laden with explosives exploded in the city. The Arsamas railway accident claimed 91 lives.

Mainly handicrafts, leather and weaving industries, manufacture of spare parts for the automobile industry and manufacture of medical products are operated. Today, Arsamas is one of the leading industrial cities in the area.

The Russian vehicle manufacturer GAZ operates a plant in Arsamas.