Main entrance of the plant in Nizhny Novgorod (2019) 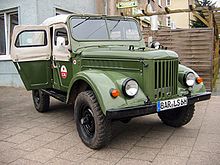 After the five-year plan 1928–1932 paid special attention to the hitherto underdeveloped automobile production, the Supreme Economic Soviet concluded an agreement in 1929 with the American carmaker Ford , from which production facilities were imported and licenses for the first models were taken over. The auto mechanic Andrei Aleksandrowitsch Lipgart, who was sent to the United States to study the US auto industry after attending university in 1930 , became chief designer at GAZ in 1933 and remained so until 1951. He was not only characterized by high technical creativity, but also by very good leadership skills out.

GAZ became one of the largest car factories in the Russian Soviet Republic ; After the construction of the factories began in 1930, production started in 1932. In the pre-war years, mainly trucks, such as the 1.5-ton GAZ-AA , but also passenger cars such as the GAZ-A or the GAZ-M1 (since 1936) were built. The latter is also known as Emka and is based on the V8-40 from Ford. During the German-Soviet War in World War II , GAZ only produced trucks for the war industry . The plant was hit several times in the summer of 1943 during the air raids on Gorky and lost production. GAZ was awarded the Order of Lenin in 1941 and 1971, the Order of the Red Banner in 1944 and the Order of the Patriotic War 1st Class in 1945 .

In 1952, after conflicts with Stalin , Lipgart was transferred to the Uralsky Avtomobilny Sawod , but in 1953 he was transferred back to research and engine design in Moscow, where he later became a full member of the Academy of Sciences and died with great honor in 1980.

In 1959 the light truck GAZ-56 was presented, which, in addition to the UAZ-450 , should round off the range of available vans . The payload was 1.5 tons. A truck with a payload of 2.5 tons and 85 hp was the GAZ-52 , which was presented in 1959 and was intended to replace the GAZ-51 . A 4-tonne GAZ-52A truck with 110 hp was derived from this. However, series production did not begin until 1966. The developments initially resulted in the GAZ-53 , which was produced from 1961 onwards and which was produced until 1993 and was accordingly widely used.

The company landed a top seller after the collapse of the Soviet Union with the GAZelle transporter that it developed itself . The first examples appeared on the streets of Russia in the mid-1990s and in 2007 the original GAZelle and all newer models based on this platform had an estimated market share of 30–50%. The GAZel is equipped with a modified 4-cylinder gasoline engine from the last Volga models produced (produced by ZMZ), which gives the vehicle an uneconomically high fuel consumption of 15–20 l / 100 km. In addition, a turbo-diesel engine ( Magna Steyr ) with a displacement of 2.1 l is offered, which is built under license by ZMZ ( Sawolschski Motorny Sawod). Occasionally GAZels that have been retrofitted with Western turbo-diesel engines are also on the move on the Russian market.

GAZ wanted to invest in the German automobile manufacturer Opel in cooperation with the Russian Sberbank and the Canadian-Austrian automotive supplier Magna International , as announced on May 29, 2009. GAZ and Sberbank wanted to take over 35%, Magna almost 20% of the shares from the previous owner General Motors . GAZ intended to build up to one million Opel vehicles a year for the Russian market by entering the market, since its own product range is now out of date and no longer in demand with Russian customers. According to a ZDF report from May 2009, Opel, on the other hand, is in great demand in Russia due to its advanced technology and is a “fashion brand”. On November 3, 2009, the sale of Opel to Magna was canceled.

GAZ has not manufactured its own cars since 2011, only the remaining GAZ Siber were sold. With the takeover of the truck manufacturer URAL in 2005 by the parent company GAZ Group , the GAZ brand focused on vans and light trucks. Nonetheless, GAZ and Volkswagen agreed on June 14, 2011 that GAZ would subcontract Volkswagen and Škoda models with an annual volume of 110,000 vehicles.

On June 22, 2012, GAZ and Mercedes-Benz announced the production of vans at the Nizhny Novgorod plant. From mid-2013 onwards, up to 25,000 units of the first-generation Mercedes-Benz Sprinter T1N will be built here , which Mercedes-Benz intends to market through its own sales network in Russia. 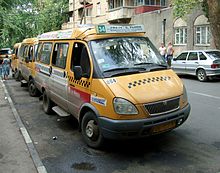 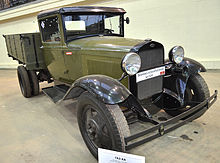 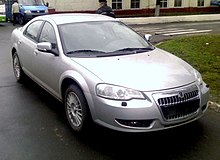 In April 2006, GAZ acquired presses and other systems for a complete car factory in the USA . The machines come from the DaimlerChrysler plant in Sterling Heights , Michigan, and were used to produce the Chrysler Sebring and Dodge Stratus . At the same time, GAZ acquired the right to manufacture and sell vehicles under its own brand and with a modified design on the Chrysler Group's mid-range vehicle platform in all CIS countries . Corresponding engines are to be supplied by Chrysler from the plant in Saltillo , Mexico . The GAZ Siber was produced for the Russian automotive market from March 2008 to October 2010. However, the hoped-for success did not materialize.

On July 31, 2006, GAZ took over the British pickup truck manufacturer Leyland DAF Vans ( LDV Limited ). New vans and minibuses were to be produced at GAZ under the Maxus label. However, from 2008 to 2009 only models from Great Britain were imported or assembled as a CKD kit . After the bankruptcy of LDV Limited, SAIC took over the rights and produces the model under its own brand name in China.

Vehicles made by Gorkovsky Avtomobilny Zavod

Automobile manufacturer in the Soviet Union