This article describes the city of Burgau in Bavaria. For other meanings see Burgau (disambiguation)

View of Burgau with its parish church 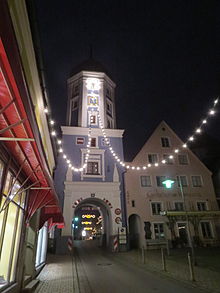 Burgau is listed on the Mindel located town in the Swabian district of Günzburg (Bayern).

The city has an eventful history. The former margraviate belonged to Upper Austria for almost 500 years . Today the Bavarian-Swabian city is also well known for the rehabilitation clinic for seriously injured skulls and brains, which is located here and funded by the Swabian district.

The Autobahn 8 Munich - Stuttgart passes it in the south.

There are 8 officially named municipal parts (the type of settlement is given in brackets ):

Bruno von Burgau was first mentioned in a document in 1147. It is assumed that the "Burg ob der Au" was built around the year 1100. The nobles of Burgau were last mentioned in 1211 in the donation book of the Wettenhausen monastery. The Counts of Burgau from the Berg family (near Ehingen) then took over rule before April 1212. Between mid-1214 and September 1216, Heinrich I of Burgau then appears for the first time with the title of margrave. He inherited this through his mother Adelheid from the Margraves of Ronsberg, who died out in the male line in April 1212. For the history of the Burgau margraves from the Berg family (1212 to approx. 1301) see Margraves Heinrich I., Heinrich II., And Heinrich III. from Burgau. On November 23, 1288, Heinrich II's grandson, who later became Margrave Heinrich III, married. von Burgau, Margareta von Hohenberg. Margareta was the niece of the Habsburg King Rudolf I and the cousin of the later King Albrecht (1298–1308). This connection was probably one of the decisive factors in the handover of the margraviate to the Habsburgs around 1301. Margrave Heinrich III. von Burgau had no sons and was probably in a difficult economic situation. After the reign was handed over to the Habsburgs, he went to the monastery in Augsburg. He is recorded as Brother Heinrich in the Book of the Dead of the Dominican Convent of St. Catherine.

In the Peasants' War in 1525, the Burgauer supported the Leipheim rebels, but could not avert their defeat. The city suffered difficult times in the Thirty Years War and the War of the Spanish Succession .

In 1806 Burgau was incorporated into the Kingdom of Bavaria . A Bavarian administrative reform in 1862 created a local court, a notary's office and a tax office. In the following year a major fire caused the volunteer fire brigade to emerge. 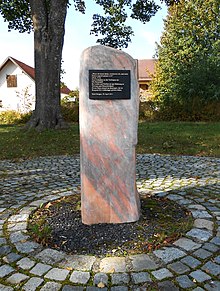 Before the end of the Second World War , a concentration camp was set up in Burgau in February 1945 , namely a men's camp and a women's camp in March, as a satellite camp of the Dachau concentration camp . The more than 1000 prisoners, including 500 Jewish women and girls from Poland and Hungary, relocated here from the Dachau , Bergen-Belsen and Ravensbrück concentration camps , had to do forced labor under miserable conditions in the Kuno factories in Scheppacher Forest to build aircraft . 18 of them died and were buried in the Jewish cemetery in Ichenhausen . Most of the remaining prisoners, especially the Jewish women, were "evacuated" via the Kaufering VI concentration camp in Türkheim to Allach on a death march in March and April 1945, and most of them were liberated there.

After the Second World War, around 1,600 displaced persons were assigned to the city for accommodation.

As a result of the Bavarian territorial reform , Burgau expanded on May 1, 1978 to include the previously independent communities of Oberknöringen, Unterknöringen with Großanhausen (until 1865 Groß- and Kleinanhausen, incorporated on July 1, 1970 to Unterknöringen) and Limbach .

9,961 inhabitants live in the urban area (October 1, 2018), who are distributed among the five districts as follows :

The city council has 20 members. In the past local elections, the seats were distributed among the individual lists as follows:

The coat of arms shows in a blue field an old Gothic tower, which consists of white ashlar stones and is crowned by four battlements. Two loopholes and an open gate decorate the tower. To the right and left of him stands a fir tree. It symbolizes a "castle in the Au", from which the place name is derived.

The celebrated occasions were:

These five-day festivals were attended by thousands of guests.

The children's bread feeding in Burgau is the oldest carnival custom in the margrave town of Burgau. In 1594 the magistrate decided - due to a famine - to distribute food to the children on Carnival Monday. The 425-year-old custom of eating bread for children was continued during the Thirty Years' War - despite hunger and plague. In the early 1950s, this custom was introduced by Albert Vogele senior. revived. Since then, the figure of the drummer Albert has been roaming the city center with children during Carnival and receives food and sweets for the children when business people shout Carnival sayings. In his successor, Albert Vogele jun. for 40 years the drumming city soldier. In 2017, his son-in-law Bernd Burkhardt took over the family tradition and slipped into the role of the drummer Albert. In addition to the drummer Albert, the Burgau town soldiers and the Glove Makers Music Association are involved in this Burgau carnival custom. For the exemplary commitment to preserving the carnival customs of children's bread feeding, the Swabian Home Prize was awarded in January 2018 by the Bavarian Minister of Home Affairs Dr. Markus Söder awarded.

Some examples of such carnival sayings and calls:

The children's bread feeding is also the starting signal for the “street carnival” in Burgau. Since 2018 this has been taking place on Sooty Friday with the participation of hundreds of schoolchildren. The highlight of the carnival in Burgau is the procession that takes place on Shrove Monday, which attracts thousands of spectators every year - Swabia's longest fun tower. The “Mardi Gras madness of Burgau” is best described by the saying: “On Rose Monday in Burgau even the pavement is foolish!”.

In addition to the Burgauer Busserln , which resemble Mozartkugeln , so-called Schloßbergkiesel are offered as sweets . Burgauer Obstwasser , Burgauer Schloßgeist and Margravial Burgauer Rat are regionally known as alcoholic specialties .

Large companies based in Burgau are z. B .:

On September 26, 1853, the Neu-Ulm –Burgau section of the Bavarian Maximiliansbahn went into operation and Burgau received its station. On May 1, 1854, the entire Maximiliansbahn line from Ulm via Augsburg to Munich was officially opened. Today the Burgau (Schwab) station on the Augsburg – Ulm railway line has three tracks and is served every hour by the regional express line Fugger Express , which runs between Ulm and Munich.

Municipalities in the district of Günzburg

Districts of the city of Burgau