from Wikipedia, the free encyclopedia
Battle of Sievershausen
Part of: Second Margrave War

The battle of Sievershausen as an oil painting around 1600

In the battle of Sievershausen near Lehrte on July 9, 1553, the combined armies of Elector Moritz von Sachsen and Heinrichs the Younger of Braunschweig-Wolfenbüttel faced the troops of Margrave Albrecht Alcibiades of Brandenburg-Kulmbach . This battle of the Second Margrave War with around 30,000 fighters and around 4,000 dead was (alongside the Battle of Lutter in 1626) one of the bloodiest armed conflicts in what is now Lower Saxony .

Prehistory of the battle

The margrave Albrecht, declared a breach of the peace , was with his mercenary army on a war campaign that led him robbing and plundering from southern to northern Germany. He cleverly supported the inner-Welfish dispute between two constituent houses of the Duchy of Braunschweig and moved against the Braunschweig Duke Heinrich the Younger . He was looking for allies, whom he found in Moritz von Sachsen and also in princes of Lüneburg . Moritz had to take up the fight because the Passau Treaty on the religious freedom of Protestants , which had just come about , threatened to fail due to the actions of the margrave. When the warring camps faced each other on the Leine near Sarstedt , there was no fight. Albrecht moved with his army towards the city of Braunschweig , where he found support. Moritz and Heinrich followed and stood in his way between the Hämeler Wald and the Fuhse near Sievershausen.

The battle site was the Feldmark between Arpke and Sievershausen. On the Saxon-Brunswick side, 15,500 armed men (7,500 horsemen, 8,000 foot soldiers) and 25 cannons were involved; the margrave had 18,000 men (6,000 horsemen, 12,000 foot soldiers) available. Initially, the Saxon army was repulsed and was already making withdrawals. When the fleeing troops suddenly turned around and took up the fight again, the troops of the margrave, certain of victory, were surprised and backed off. When the Saxons got in the rear of the enemy, the battle was decided and the margrave fled. The fighting lasted about four hours. According to contemporary accounts, it was a "horrific slaughter" in which the fight was tough and dogged.

The information on losses differs from one another in the various sources. However, around 4,000 fighters are said to have died and around 8,000 men were injured. Many Lower Saxon and Saxon nobles were among the dead. It is reported that four princes , nine counts and 250 knights were killed. They were transferred to their hometowns (including Celle, Goslar, Hanover, Peine, Burgdorf, Wolfenbüttel). The leader of the Landgrave-Hessian contingent of 600 mounted soldiers fighting on the Saxon side , Wilhelm von Schachten , was so seriously injured that he died of his wounds three weeks later. Most of the fallen were buried near the battlefield. It is assumed that this is a depression near Arpke, the so-called hero or death pit.

Among the dead were two sons of Duke Heinrich ( Philipp Magnus and Karl Victor), which meant that the youngest son Julius was entitled to inheritance.

Death of the Saxon Elector 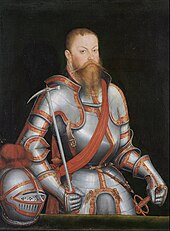 The Saxon leader, Elector Moritz , suffered a gunshot wound in the battle. One of his servants is said to have shot him from behind, injuring his bowels . He died two days later as a result of the injury. The corpse was brought back to Moritz's homeland in Saxony, but the heart and entrails were buried in the church of Sievershausen. On Harnisch of the elector, which today in Freiberg Cathedral is kept the bullet hole can be seen at hip level.

The injury, which in itself was not fatal, quickly led to speculation that the actual cause of death was different or that a murderer had been hired to act. These speculations were also based on the fact that the Protestant Moritz himself had many enemies at his own court, because he had been allied with the Catholic Emperor Charles V against the Schmalkaldic League in 1546/47. In this way, the Saxon electoral dignity passed to him, which Johann Friedrich I of Saxony had previously held and lost. Moritz von Sachsen was known as "Judas von Meissen". The most probable and then most common cause of death in such cases is likely to have been an infection of the wound.

Result of the battle

The defeat of Margrave Albrecht Alcibiades helped to secure the final conclusion of the Augsburg imperial and religious peace in 1555. This is the most essential historical significance of the battle, which is considered to be the most sacrificed of the Reformation.

Commemoration of the battle

In Sievershausen the battle is remembered in the following way:

From 1967, on the initiative of the pastor Klaus Rauterberg, events of the peace movement took place in the Protestant parish under the name anti-war workshop . The occasion to institutionalize the work was a larger commemorative event at the memorial stone for Elector Moritz on July 9, 1978, which was experienced by many people as cynical due to the speeches. As a result, in the late autumn of 1978, the initiative to set up a documentation center was formed. On September 1, 1979, the foundation stone was laid for today's building, which had been given to the association and which young people demolished and rebuilt: The Sievershausen Anti-War House is supported by the Documentation Center for War Events and Peace Work eV . The work of the association was partly controversial in the village. In addition to exhibitions and events, the house also offers simple overnight accommodation.