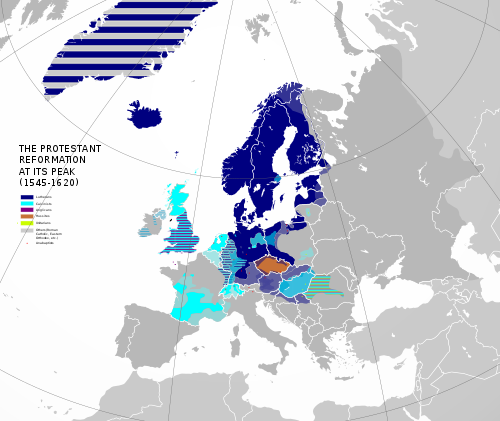 Confession formation as a theoretical precursor

The theory of confessionalization is based on the work of Ernst Walter Zeeden , who in the 1950s was the first to describe the phenomenon of denominational formation , whereby Zeeden used this term primarily to refer to processes of change within the church in the course of consolidation after the eventful Reformation period: “the spiritual and organizational consolidation of the Christian creeds, which have diverged since the religious split, towards a halfway stable churchism according to dogma, constitution and religious moral way of life ”. In addition, Zeeden already speaks of the “confessional age”.

Basics of the theory

The German historians Wolfgang Reinhard and Heinz Schilling developed the theory independently and in parallel at the end of the 1970s. Schilling sees in denominationalization “a fundamental social process that profoundly plowed up public and private life in Europe, mostly in parallel, sometimes also opposing interlocking with the development of the early modern state and with the formation of a modern, disciplined subject society that is different from the medieval society was not personal and fragmented, but organized institutionally and in terms of area ”. According to this view, the division of Christianity into several denominations has not only brought about great changes in the church and in the religious field, but has also profoundly changed society in all sub-areas, with all denominations showing comparable development patterns. The development of the three major confessions also ran parallel to one another: Instead of understanding the Counter Reformation only as a reaction to the Reformation, the institutionalization of the Catholic reform after the conclusion of the Council of Trent in the 1560s was paralleled with that which had been advancing in the empire since the 1560s second Reformation of the Reformed ( Calvinist or Zwinglian ) creed; At the same time, the Lutheran denomination was only then consolidated into a similar institutional consolidation.

This conception is influenced by the dominance of the history of society based on modernization theory in West German historical studies, which has existed since the 1970s , which explains Wolfgang Reinhard's retrospective assessment of the discovery: “We may think, but at the same time it thinks within us. How much certain conclusions are 'in the air' due to this supra-personal trend, I experienced myself when Heinz Schilling coined the new term 'denominationalization' at the same time, but apparently completely independently of me and on the basis of completely different data material has. ”In contrast to the pair of terms Reformation - Counter- Reformation, which was coined in the 19th century by Protestant-Prussian historiography, for the age of religious struggles, in which a distinction was made between the Reformation, which was regarded as progressive and the Counter-Reformation, which was regarded as retrograde, in that of Reinhard and Schilling's coined term placed greater emphasis on the modernization of early modern society. This overcomes the pejorative trait that has hitherto been attached to the expression Counter Reformation . According to Reinhard, both the Reformation and the Catholic Reform and Counter-Reformation contributed to the modernization of Europe.

As a result of the denominationalization thesis, religion, which played a major role in everyday life in the early modern period but was long neglected in research, has returned to the center of historiographical attention due to its connection with state formation and the paradigm of modernization.

Both researchers have developed basic models for denominationalization, Reinhard for the content, Schilling for the temporal analysis.

Wolfgang Reinhard based the "unity of the new large group denomination" on the following points:

Taking advantage of this, the work of the parish priests and local teachers gave access to the conduct of life of the subjects; the church servants thus acted as “an important transmission belt between the state-bureaucratic center and the periphery”. And if the emerging early modern state knew how to make use of these resources, it would have been able to achieve “discipline and homogenization of the subjects”. Denomination images were among the means that accompanied this development process.

Heinz Schilling provides a four-phase model for the time of confessionalization within the Holy Roman Empire:

This brought the historical epoch between 1570 and 1620, which had previously been overshadowed by the outstanding events of the Reformation and the Thirty Years' War , to the center of the research discussion.

Wolfgang Reinhard, on the other hand, sees a broader temporal framework for denominationalization: it began with the princely church visits in the 1520s (and the reactions on the part of the Old Believers), and only ended with the denominational homogenization processes in France and Great Britain in 1685 and 1688–1707 with the expulsion of the Salzburg Lutherans in 1731. Lately, Helga Schnabel-Schüle, among others , has questioned the final point of the Peace of Westphalia in 1648. Various researches on the formation of denominations in other parts of Europe have also shown that such processes also took place in other periods of time. Nevertheless, the talk of denominationalization has now also penetrated the historical scholarly debates outside the German-speaking area.

The original conception of confessionalization was about the proof of a connection between the consolidation of church structures and the increase in state power since the 16th century, which was therefore statistically shaped. Since the 1990s, more and more historians have been turning against this, also looking at pan-European developments outside the empire. Heinrich Richard Schmidt is considered a pioneer in this development . He calls for the state-centered view to be supplemented by the formation of denominations from “below”. The municipalities and cities, but especially the statements of the individual subjects, play a role in this process of modernization, which is why Schmidt used court minutes to investigate whether anything has actually changed in the subjects' beliefs by means of the transmission belt confessionalization. In the meantime, therefore, less emphasis is placed on the connection between denominational formation and state formation than the effect of denominational formation on social discipline , the formation of a homogenized group of subjects, which, according to Gerhard Oestreich, can be dated to the 16th and 17th centuries.

Some other basic assumptions of the confessionalization thesis were also disputed; Winfried Schulze can still see no impetus for modernization in the newly formed denominations, and Michael Stolleis maintains that the early modern state did not arise through denominational ties, but on the contrary solely through secularization . And it was pointed out that a denominational identity in the population did not develop profoundly until the 19th century, while religious indifference was often established beforehand. A research group around Lucian Hölscher spoke in the same way of the "late confessionalization" of the Germans in the 19th century.

In addition, in recent years, based on the change in historical studies due to the New Cultural History , the (often more fluid than previously assumed) transitions and pluralities between and within denominations as well as forms of mixed denominational coexistence and exchange have come into focus, often examined on the basis of micro-historical regional studies.

In the meantime, the original conception of denominationalization is hardly represented in its pure form, but has been more and more differentiated, as the Bayreuth Conference of 2008 on this topic shows. However, the focus of early modern German-language research on the connection between religion and society and the temporally and functionally parallel development of the three major denominations has remained, which is why denominationalization is now used in the terminology of Thomas S. Kuhn as a (research) paradigm - that has not yet been overcome.

The terms denominationalism and denominationalization are increasingly used in the media and science in connection with denominational conflicts in the Near and Middle East, on the one hand for the political system of Lebanon based on denominational proportional representation , on the other hand to describe sectarian conflicts such as in the Syrian war , in Yemen or in Iraq , for example between Sunnis and Shiites . Due to the lack of distinction between historical theory and the different cultural contexts of these conflicts, the orientalist and Middle East expert Daniel Gerlach suggests the term ' sectarism ' - based on the English 'sectarianism' or French 'sectarisme'.