The originator of the term is the psychologist William James , who in 1890 advocated the idea of ​​a continuously running "stream of consciousness" going back to Charles S. Peirce .

Based on this description, two different understandings have emerged as to what is meant by stream of consciousness . At the same time, however, this lack of clarity has also led to the fact that there is no clear definition of the term stream of consciousness and therefore the delimitation from the inner monologue cannot be made precisely.

One interpretation sees the stream of consciousness as a psychological phenomenon, as "raw material" (WG Müller), which is attempted to be brought into writing using literary techniques. Accordingly, the free internal reproduction of thoughts and the internal monologue are to be understood as a sub-concept of the stream of consciousness. Such a text tries to subjectively reproduce the perceptions, thoughts, feelings and reflections of a narrative figure as they flow into human consciousness . The stream of consciousness has also been referred to as the “radicalization of personal narration ”, since the inner world of the character is also presented there without comment and the narrator should step back from the action.

Differentiation from the inner monologue

The term is often used synonymously with the inner monologue, a precise separation has not emerged. The Oxford Dictionary of Literary Terms differentiates between “psychological” and “literary” usage. "In the psychological sense, the stream of consciousness is the thing, while the inner monologue is the technique with which it is presented." The narrator selects it, it does not necessarily mix it up with impressions and perceptions and it does not violate the rules of grammar any more than it violates those of logic. Conversely, the stream-of-consciousness technique does one or the other or both. ”According to this, the stream of consciousness technique can be understood as a sub-form of the inner monologue that does not adhere to the rules of narrative conciseness, stringency, logic and sentence structure.

The narrative technique of the stream of consciousness consists in direct personal speech with syntactic independence, using the present tense as the normal tense and the indicative as the normal mode. The first person is used to designate the thinking figure, so it is told from the first person perspective . The decisive difference between the stream of consciousness and simple direct personal speech is made up of style and context: Verba credendi (e.g. “I thought ...”) and quotation marks are missing, because “The principle is to let figure consciousness 'speak' for itself: perceptions , sensations , Associations of all kinds , memories , reflections, even mere sequences of sounds without express announcement or intervention by a narrator to 'record'. "

Facts that are self-evident to the figure, for example because they are currently executing them, are not mentioned and must be reconstructed by the reader himself. Any narrative report only has the function of situating the figure and its inner monologue in the outside world and thus creating a narrative framework that the figure could not create. But external events are only important as an incentive and trigger for internal processes. Another stylistic feature is the omission of information through psychological-syntactic abbreviation: Nouns, personal pronouns or finite verb forms are often omitted, sometimes articles, prepositions and conjunctions. The contents and impulses of consciousness also interlock in a freely associated manner, just as they just fall into consciousness. They are not necessarily ordered linearly in chronological order. 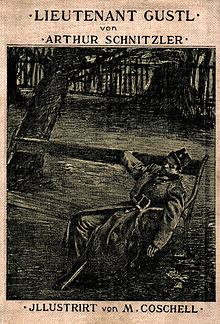 In several literary works there are certain moments that already point to the stream of consciousness, for example in the life and views of Tristram Shandy, Gentleman (1757) by Laurence Sterne , in the story The Treacherous Heart by Edgar Allan Poe and, which is also very successful in Germany in An Occurrence at Owl Creek Bridge by Ambrose Bierce and Anna Karenina (see below). Works by Henry James ( Portrait of a Lady ) and Knut Hamsun ( Hunger , 1892) were also named as forerunners.

The term was first coined in 1890. The American psychologist William James used it in his main work The principles of psychology (New York: H. Holt and Company). He used the term to describe the novel Les lauriers sont coupés by the French writer Edouard Dujardin (published in 1888). This term does not only refer to the mere verbal process, but also takes into account sensual, for example visual, perceptions. While the term was not taken up again until 1918, Dujardin's text found imitators. Arthur Schnitzler read Dujardin's text, but judged the topic to be inappropriate and, with Lieutenant Gustl (1900), wrote the first German-language story that follows the stream of consciousness entirely. (Later he used it again in Miss Else ). Even James Joyce and Virginia Woolf called Dujardin as a template. The term stream of consciousness did not gain acceptance until 1918, when it was used in a review by the author May Sinclair (1863-1946 ) to characterize the work Pilgrimage by Dorothy Richardson (1873-1957).

In 1940, the novelist and literary scholar Vladimir Nabokov took the view that the literary technique of the stream of consciousness (which he did not distinguish from the inner monologue) was actually invented by Leo Tolstoy for his novel Anna Karenina , published in 1877/78 : In Chapter XXIX of Part 7 He indiscriminately identifies the thoughts of his protagonist during a trip to the train station, where she will commit suicide, whether they are reflections on her seemingly hopeless situation, observations from the window of the carriage or advertising texts in the Moscow shop windows. 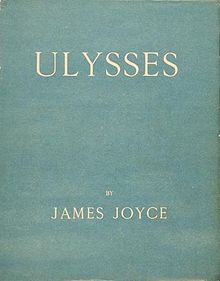 With the last chapter ("Molly's Monologue") of Ulysses (1921), Joyce created the prototypical example that is often used to illustrate the flow of consciousness technology. The novel ends with:

"I was a Flower of the mountain yes when I put the rose in my hair like the Andalusian girls used or shall I wear a red yes and how he kissed me under the Moorish Wall and I thought well as well him as another and then I asked him with my eyes to ask again yes and then he asked me would I yes to say yes my mountain flower and first I put my arms around him yes and drew him down to me so he could feel my breasts all perfume yes and his heart was going like mad and yes I said yes I will Yes. "

“Where I was a flower of the mountain, how I put a rose in my hair like the Andalusian girls always did or should I wear a red one, yes and how he kissed me under the Moorish wall and I thought, well, he was so good like everyone else and asked him with his eyes he should ask again yes and then he asked me if I want to say yes my mountain flower and I first put my arms around his neck and pulled him down to me that he my breasts could feel how they smelled yes and his heart went crazy and I said yes yes I want yes. "

- In the translation by Hans Wollschläger

Since the stream of consciousness is not a regulated technique, it can have different characteristic features in each author. With Joyce, for example, it is the abbreviated syntax, the personal idiom, arbitrary word formation, onomatopoeia and language games.

The stream of consciousness technique found particular approval in English and American modernism, which established itself in the late 19th century as a counter-movement to literary realism and naturalism . The Surrealists also did something very similar, starting from Europe.

The stream of consciousness was also modeled in Asia. After 1979, with the political opening and separation from the communist-socialist ideology, he also appeared in China . A typical example is the eye of the night of Wang Meng .

Modern film and experimental film were not unaffected by this, mostly outside the mainstream.

Famous for using this technique are: