Rahlstedt is a Hamburg district in the Wandsbek district on the northeastern edge of Hamburg and borders the Schleswig-Holstein district of Stormarn .

The most noticeable features of the terrain besides the rivers can be found as remnants of the last Ice Age in the two nature reserves Stellmoorer Tunneltal and Höltigbaum .

Rahlstedt and the surrounding area around 1790 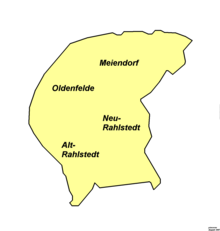 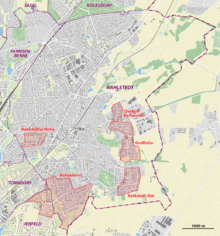 The oldest documented mentions that have come down to us were in 1212 as Rothuluestad and in 1248 as Radoluestede . The name refers to a foundation as a Saxon settlement by a man named Radolf or Radulf, the suffix -stede means (living) place. Rahlstedt lay beyond the eastern borders of Hamburg, belonged to the Duchy of Holstein under the Danish crown and with it fell to Prussia in 1864 .

On September 29, 1904 between the station was Rahlstedt of Lübeck-Büchen Railway Company and Volksdorf the Electric Light Railway Alt-Rahlstedt Folk Village opened and on May 9, 1907 to Wohldorf extended its remaining operating existed until 1,961th

Around the turn of the century, Rahlstedt developed into a popular villa suburb for wealthy Hamburg merchants. During this time, many Wilhelminian style and Art Nouveau villas were built, which in many parts shape the appearance of Rahlstedt.

In 1927, the villages were Altrahlstedt, Neurahlstedt, Meiendorf and Oldenfelde and parts of Tonndorf-Lohe and Jenfeld the Prussian community Rahlstedt together and came to the Greater Hamburg Act 1937 to Hamburg . The old core consisted of the station , located on the Lübeck – Hamburg railway line (via Fehmarn to Scandinavia) and the oldest Südstorman church from the early days of the village, today's Alt-Rahlstedt church on Rahlstedter Straße .

Since the 1930s, Rahlstedt was an important garrison location in Hamburg with three barracks ( Lettow-Vorbeck-Kaserne , Boehn-Kaserne and Graf-Goltz-Kaserne ) and a training area . In the 1960s, not only the Hohenhorst district in the south-west of Rahlstedt was planned and built. The large settlements Großlohe and Rahlstedt-Ost also emerged on the eastern edge, and the districts of Meiendorf and Oldenfelde were increasingly being built on with individual houses.

In the 1990s, almost all military facilities in Rahlstedt were closed. The former training area Höltigbaum was for the most part to the nature reserve and partly to the business park Höltigbaum. A memorial plaque has been commemorating the 330 executions due to military court judgments in World War II since 2003  . New residential areas were built on two former barracks.

Rahlstedt has gradually developed into the most populous Hamburg district. With the construction of a train station in 1893 between Altrahlstedt, Oldenfelde and Neurahlstedt, the rural place became interesting for higher earners and senior civil servants for the first time as a place to live away from work. Entire streets were built around the turn of the century, and their villa buildings are very typical for Rahlstedt. The central parts of Rahlstedt are still characterized by these villas today. After the Second World War, refugees from the former German eastern regions and bombed-out Hamburgers settled in the district. With the formation of the districts of Hohenhorst , Rahlstedt-Ost and initially Großlohe-Nord and from 1964 finally also Großlohe-Süd in the early 1960s, Rahlstedt was considerably enlarged. These areas were once "cow paddocks" and were built over with planned residential complexes and so-called prefabricated buildings or assembly buildings and a few high-rise buildings. In addition, there are also large areas with terraced and single house developments. At that time these new districts of Rahlstedt were something like a satellite town , living space was urgently needed. Many Hamburgers who were made homeless during the Hamburg storm surge on February 16 and 17 moved to the new development areas. Although Rahlstedt had started to grow long before the flood disaster, the events accelerated growth.

Alt-Rahlstedt was first mentioned in a document in 1248. The church of Alt-Rahlstedt from the 13th century was the center of a large parish . In the 14th century , the Hamburg cathedral chapter acquired large parts of the place. In the 16th century the old lordly office of Trittau came into being . During the Thirty Years' War in 1627 the commanders of the Catholic League Tilly and Wallenstein quartered in Alt-Rahlstedt.

1814 the village had to go to the battle of Braak for around 22,000 Russian soldiers and their horses at the siege relief of Hamburg harbor. With the opening of the train station in 1893 - the construction of which was initiated and promoted by the Alt-Rahlstedt factory owner Cord Eduard (Edward) Heinrich Grube (1856–1924) - Alt-Rahlstedt experienced an upswing and became a Hamburg villa suburb. In 1889 Alt-Rahlstedt became the seat of the office of the same name . In 1896 the town's first savings bank was founded. The small electric railway Alt-Rahlstedt – Volksdorf – Wohldorf was opened on September 29, 1904 and connected the Hamburg enclaves in the northeast to the railway network.

The district of Neu-Rahlstedt is almost as old as Alt-Rahlstedt. In Neu-Rahlstedt an old village center is still preserved, which is reminiscent of a round because of its current horseshoe shape . It was placed under milieu protection in 1985 . In 2012, further parts of Neurahlstedt were placed under ensemble protection. The Martinskirche , built in 1961 by Olaf Andreas Gulbransson , is in the immediate vicinity of the village square . With its architecturally remarkable tent roof and the striking white paint, it has stylistic echoes of the pilgrimage church Notre-Dame-du-Haut near Ronchamp , built by Le Corbusier in 1955 . The church windows were created by Hubert Distler .

Meiendorf is mixed in terms of the housing stock. The north consists largely of single houses, the west and the center of the district have multi-storey social housing from the 1960s. There are also isolated houses from the Wilhelminian era, particularly near the old village center.

A historic village center of Oldenfelde no longer exists. Today, Oldenfelde is characterized by both the development of single houses and buildings with social housing from the 1950s and 1960s, so that the current building structure of Oldenfeld can be described as mixed and varied.

Hohenhorst was built on the south-western edge of the district in the 1960s as a modern settlement completely planned by Ernst May . In the center there is the Berliner Platz shopping center and nearby the Evangelical Lutheran Trinity Church. Markus parish Hohenhorst Rahlstedt-Ost.

This district on the eastern edge of the district consists mainly of housing developments from the 1960s, most of which were built using prefabricated panels.

For the election to Hamburg citizenship , the district forms the constituency of the same name Rahlstedt . The 2015 state election led to the following result:

The population of Rahlstedt is composed as follows (data from the North Statistics Office, as of December 2016):

Rahlstedt has a mixed population structure, the social areas alternate with high-income residents (e.g. in parts of Meiendorf and Alt-Rahlstedts) and low-income residents (e.g. in parts of Großlohe and Hohenhorst). The average annual income per taxpayer was around 33,419 euros in 2013, which is slightly lower than the Hamburg average (39,054 euros)

The first school was built in Rahlstedt in 1895 next to the pastorate established two years earlier. Since 1921 there was a middle school on Barsbütteler Straße (today Hüllenkamp), which became a secondary school in 1929 and has been a grammar school since 1937. This grammar school is now on Scharbeutzer Straße. The buildings at Hüllenkamp now house a secondary school, a secondary school and a primary school. There are also high schools in the districts of Oldenfelde (Oldenfelde high school in Birrenkovenallee since 1977) and Meiendorf ( Meiendorf high school in Schierenberg). Primary schools exist in Altrahlstedt, on Großlohering, Wildschwanbrook, Am Sooren, Bekassinenau, Brockdorffstraße, Kamminer Straße, Meiendorf, Nydamer Weg, Potsdamer Straße, Rahlstedter Höhe and in Neurahlstedt. There are district schools in Altrahlstedt, Oldenfelde and Meiendorf. There is also a school for the mentally handicapped in Paracelsusstrasse and two special needs schools.

In total, Rahlstedt has 18 state schools.

The Alt-Rahlstedter theater group has been the only theater to have established itself in Rahlstedt since 1986 . The amateur theater mostly plays classics.

The Evangelical Cemetery Rahlstedt has been the burial place of the Evangelical Lutheran parish in Alt-Rahlstedt since 1829. The Hamburg sculptor Richard Luksch created the figure of the rose picker for the grave monument of the writer and playwright Detlev von Liliencron . The “Tree of Life” has stood there since 2014, which wood sculptor Peer Oliver Nau had created from a 125-year-old, dead American red oak within two years. A central point is the eternity letter box: Letters to the deceased can be dropped in the large cavity in and under the oak.

The federal highway 75 , which was partially expanded to four lanes and downgraded at the beginning of 2015, ran through Rahlstedt . Not in the Rahlstedt area, but nearby is the Stapelfeld junction of federal motorway 1 .

The Lübeck – Hamburg railway runs parallel to the former B75 with Hamburg-Rahlstedt station , where regional trains on the RB81 line stop. The station was initially called Rahlstedt before it was renamed Hamburg-Rahlstedt on April 1, 1938 as a result of the Greater Hamburg Act . In 2011 the old station building was demolished. The construction of an S4 S-Bahn line has been under discussion for a long time .

The north-western border of the district forms the underground line 1 with the stops Oldenfelde and Berne .

The district is also connected to the following public transport bus lines (operated by the Hamburg Transport Association ):

The Catholic Church has been running a children's hospital in Rahlstedt at Liliencronstrasse 130 since 1925. The hospital , originally a refuge, was expanded to include an infant home in 1927 and eventually developed into a children's hospital after the end of the Second World War . The Wilhelmstift Children's Hospital can also be easily reached by public transport thanks to the bus stop of the same name (lines 35, E62, 162 & 262) . The Catholic parish in Rahlstedt is the Assumption of Mary at Oldenfelder Str. 23. The parish church was consecrated in 1960 and, together with the rectory and the church forecourt, is a listed building.