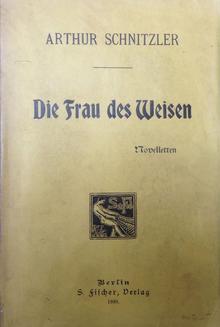 Flowers is a novel by Arthur Schnitzler , which appeared on August 1, 1894 in the magazine "Neue Revue" in Vienna and was subsequently included in the volume of novels, Die Frau des Wisen , published by S. Fischer Verlag in 1898.

The first-person narrator, a Viennese, describes his deep pain at a woman who betrayed him and left him, in all its dimensions. When she later falls ill, however, the consolation in Schnitzler's first-person narrator takes over and even turns into a blessing: "That she had to suffer herself." He is also shocked when he receives the news of the young woman's death. The former great love had never completely forgotten him, which was mainly shown by the fact that she sent him flowers every month after the separation. The disturbing and almost eerie twist of the novella is that the box of carnations and violets continues to be delivered after the woman's death. Of course, the first-person narrator also thinks of the possibility of a standing order from the flower shop, but he also recognizes desperately that he is more powerful than the people outside, than the spring outside the window and even more powerful than the sun. Because he can lock out all three - people, spring and sun - by closing the window and lowering the curtains. Only memory is more powerful than himself. He cannot banish it from his memory on his own.

Gretel, the young, very beautiful girl, frees the first-person narrator from his torment. The new lover throws the withering carnations and violets out onto the street and brings fresh, fragrant lilacs.

"The dead come back as long as we don't forget them."

“A novel of particular delicacy. A certain sentimentality doesn't bother much. "

Novels
Mrs. Bertha Garlan  | The way into the open  | Therese. Chronicle of a woman's life

Stories
What a melody | He waits for the wandering God | America | Inheritance | The prince is in the house  | My friend Ypsilon | The other | Wealth  | The three elixirs | The bride | To die  | The son  | The comedians | The little comedy  | Walk | Flowers  | Later fame  | The widower  | The sensitive | The other. From the diary of a bereaved | A farewell  | The Wise's Wife  | The day of honor  | The dead are silent  | The next  | By an hour  | A success  | Legend | Lieutenant Gustl  | The blind Geronimo and his brother  | Benefits given quietly and purely | Andreas Thameyer's last letter  | The green tie | Boxer Rebellion | The Greek dancer  | The stranger  | Eccentricity | The fate of the Baron von Leisenbohg  | The prophecy  | Evening stroll  | The new song  | The Bachelor's Death  | The dead Gabriel  | Story of a genius | The Redegonda Diary  | The killer  | The triple warning | The shepherd's flute  | Mrs. Beate and her son  | Escape into darkness  | Doctor Gräsler, spa doctor  | The last letter from a writer | I  | Casanova's drive home  | Miss Else  | The judge's wife  | Dream novel  | Game at dawn  | Adventurer novella  | The second

Plays
The Adventure of a Lifetime | Alkandi's song | The fairy tale  | Anatole  | The overstretched person | Half past two | Flirtation  | Fair game  | Round dance. Ten dialogues  | The Legacy  | Paracelsus  | The green cockatoo  | The mate  | Beatrice's veil  | New Year's Eve  | Living hours (one-act cycle) :  Living hours , The woman with the dagger , The last masks , literature ) | The lonely way  | The puppeteer | The brave Cassian  | To the big sausage  | The Delorme House  | Interlude  | The call of life  | Countess Mizzi or The Family  Day | The Metamorphoses of Pierrot | The brave Kassian | The young Medardus  | The wide land  | Professor Bernhardi  | Comedy of words  | Finch and lilac bush  | The sisters or Casanova in Spa  | The walk to the pond  | Comedy of seduction  | In the play of the summer air | The word  | Train of shadows  | chivalry