The deputies of the Majles Schora Melli were initially elected for a period of two years and later for four years. A member of parliament cannot simultaneously serve as a minister in a government or hold any other public office. In the election for the first parliament, there was still class voting rights according to status (nobles, clergy, landowners, craftsmen and merchants). In the following years, the members of parliament were and are elected according to religious affiliation ( Muslims , Jews , Christians and Zoroastrians ). The religious minorities of the Iranian Jews, Syrian Christians and Zoroastrians are represented by at least one member each in the Iranian parliament, the Armenian Christians by two members. The remaining seats go to the Muslims.

The first meeting of the Majles Schora Melli took place on October 6, 1906, the last meeting on February 10, 1979. Thus, after 73 years, the secular legislation in Iran came to an end. (See: All laws and protocols of Majles Schora Melli from the first legislative period in 1906 to the twenty-fourth and last legislative period of 1979.) After the Islamic Revolution, the newly established parliament was named Madschles Schora Eslami under the new constitution . The legislation is now subject to the proviso that all laws must comply with the requirements of the Koran as well as the other Islamic legal sources ( hadith ) or legal provisions (al-ahkām asch-sharʿiyya) of the Islamic legal system Shari'a , as described by Islamic jurisprudence ( Fiqh ) specified. The Guardian Council , which like the revolutionary leader, has the right to veto these requirements . 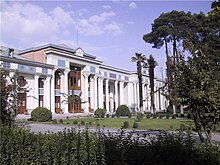 The Iranian parliament building was in use until 1979

Already during the time of the Qajar ruler Nāser ad-Din Shah (1848–1896), calls for the creation of a legislative institution and a constitution were increasing in Persia. On August 5, 1906, his successor Mozaffaroddin Shah (1896-1907) announced a decree to create a parliament. In the years 1906 to 1911, the fundamental laws (Basic Law and Electoral Laws) that formed the Iranian constitution of the newly created constitutional monarchy were created as part of the constitutional revolution . Hossein Pirnia is considered to be one of the most important members of parliament in the early days of Iranian parliamentarianism .

As early as October 6, 1906, Parliament met for its constituent session in the Golestan Palace . The first speaker of parliament was Morteza Gholi Khan Hedayat Sani-al-Dowleh. The beginning of the constitutional monarchy was marked by several coup attempts by Mohammed Ali Shah , who came to the throne in 1907. The parliament was dissolved again in the following period, mainly due to pressure from Tsarist Russia, which supported Mohammed Ali Shah's attempted coup against the constitutional government.

Whereas in the first Iranian parliament from 1906 to the end of the first legislative period in June 1908 the deputies appeared as individual representatives of their constituencies, two political groups were formed in the second parliament from 1909 to 1911, the conservative moderates ( Etedalliyon ) and the more progressive oriented democrats. The Democrats founded a national political party based on the European model and formulated a party program that was based on Bismarck's domestic political reforms , in particular his social reforms.

The hard-won democratic self-government of Iran came to an end in December 1911. After Russian troops occupied northern Iran, shot at the pilgrimage sites in Mashhad and marched as far as Tehran to force the resignation of the US-American Morgan Shuster, who had been recruited by the Iranian government as General Treasurer , the parliament was dissolved prematurely . 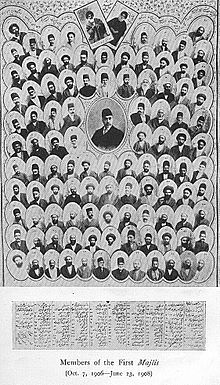 The third attempt in 1914 to resume parliamentary work ended due to World War I and the occupation of Iran by British and Russian troops . Parliament was dissolved on November 3, 1915.

The political impact of World War I on Iran was devastating. After the October Revolution in Russia, the country became a staging area for British troops who came to the aid of the Tsarist White Army . After their defeat, the British troops were relocated back to Iran. The north of Iran was initially occupied by the Red Army .

Even after the end of the First World War, Iran did not come to rest. The Prime Ministers were appointed by Ahamd Shah, but they lacked any legitimacy as the parliament remained closed. The British government forced the Anglo-Iranian treaty on the Iranian government under Prime Minister Hassan Vosough in 1919, which would have made Iran a de facto British colony if it had actually come into force. In order to bring the treaty into force, it would have required the approval of the Iranian parliament, which, however, did not meet.

Only the putsch carried out by Seyyed Zia al Din Tabatabai and Reza Khan on February 21, 1921 ended the domestic political crisis. Elections were held and parliamentary work resumed in June 1921.

The fourth parliamentary term was opened on June 22, 1921, after 6 years of interruption of parliamentary work, under Prime Minister Ahmad Qavam . Several political groups were represented in Parliament. The Democrats now called themselves Socialists . They were represented by 29 MPs, including Soleiman Mirza Eskandiari , who later became the first general secretary of the communist Tudeh party, and Mohammad Sadeq Tabatabai . They called for the nationalization of the means of production, the creation of a central government and the introduction of social security for the workers. The conservative moderates , who also called themselves reformers, were represented by 32 MPs. Their leaders were Hassan Modarres and Abdolhossein Teymurtash . They were against a strong central government and were in favor of secular reform policies within the framework of the constitution. Political support for Reza Khan , who headed the Defense Ministry under Prime Minister Qavam, came from the Renewal Party and the Radical Party, who wanted to create a strong army, a strong central government, the rapid industrialization of the country, the expansion of education and the Separation of state and religion occurred. There were also some independent MPs, such as the brothers Hassan Pirnia and Hossein Pirnia , who mostly voted with the moderates. The fourth session saw the establishment of a modern Iranian army by Defense Minister Reza Khan, who in January 1922 dissolved the Persian Cossack Brigade and the Persian Gendarmerie as independent military units and integrated them into the newly created army. The British-commanded South Persian Rifles had already been disbanded in December 1921.

The rejection of the Anglo-Iranian treaty of 1919 was significant in terms of foreign policy . With this decision, Iran obtained its political independence and was able to break free from British dependency.

Beginning of World War II, occupation of Iran by British and Soviet troops as part of the Anglo-Soviet invasion of Iran

Although the 1906 constitution provided for a second chamber, the Senate, in addition to parliament, it was not until 1950 that this second chamber was established. After the assassination attempt on Mohammad Reza Shah in 1950, Parliament passed the law establishing the Senate at his pressure. This means that the two-chamber system provided for by the constitution in 1906 was only established in Iran after more than 40 years. The Senate was abolished again with the Islamic Revolution.

A decision that was particularly significant for Iranian history was the decision to overturn the Qajar dynasty on October 31, 1925, and the later installation of Reza Khan as the new Shah Reza Pahlavi .

Another significant decision was the nationalization of the oil industry, decided by Prime Minister Hossein Ala on March 15, 1951, by the Iranian parliament, which until then had been in British hands.

The Iranian parliament passed groundbreaking laws for the Islamic world. The law on the protection of the family , which guaranteed women custody of children in the event of a divorce, should be mentioned in particular .

Until 1963, active and passive voting rights were reserved for men only. As part of the White Revolution , Mohammad Reza Shah Pahlavi introduced women's suffrage. The introduction of women's suffrage was opposed by the conservative clergy, especially by Khomeini . On June 5, 1963, riots broke out, led by the conservative clergy. Khomeini then had to leave the country and went to Iraq. On October 6, 1963, the 21st parliamentary session was opened with the newly elected female MPs.

After the Islamic Revolution , the parliament was named Madschles Schora Eslami (Islamic advisory assembly) under the new constitution , which replaced the old name Madschles Schora Melli (National Advisory Assembly). However, as the constitutional organ of the Islamic Republic of Iran, the Majles Shora Eslami no longer has the high position within the state structure that the Majles Shora Melli held after the constitutional revolution of 1906 together with the Senate until 1979. According to the Iranian media, in an interview with the Fars agency on July 4, 2011, the President of Parliament Ali Larijani said:

“In the political order of the Islamic Republic, the opinion of the spiritual leader of the revolution is decisive in all questions. […] Sometimes we decide something and when we find that the leader disagrees, we reverse the decision. That is the positive thing about this Parliament, which is immediately ready to implement the views of the revolutionary leader! "

Elections in Persia and Iran