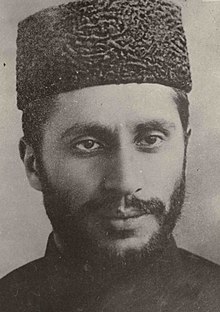 Seyyed Zia al Din Tabataba'i ( Persian سید ضیاءالدین طباطبائی; * 1888 in Shiraz ; † August 29, 1969 in Tehran ) was an Iranian journalist and politician who was Prime Minister under Ahmad Shah Qajar , the last Shah of the Qajar dynasty, from February to May 1921 after a coup . Tabatabai was married with two sons and a daughter.

Seyyed Zia al Din, who later went by the name Tabataba'i, was born in Shiraz . His father, Seyyed Ali Yazdi, was a Shiite clergyman and had more than 30 children by 15 women. Seyyed Ali was known to be a good speaker. In the Constitutional Revolution , he initially defended the absolutist monarchy under Mohammed Ali Shah , but later supported the constitutionalists.

After his father moved to Tabris , Seyyed Zia spent his childhood in Tabris and also attended school there. At the age of 12 he went to Tehran and at 15 he went back to Shiraz to see his grandmother. In Shiraz, at the age of 16, he published his first newspaper, Nedaye Islam , which was printed on green paper.

At the age of twenty, he moved with his parents to Tehran , where he published the anti-government newspaper Sharq . He escaped arrest by applying for asylum at the Austrian embassy. After a general amnesty, he traveled to Paris and London in 1911 to study.

He returned to Iran in 1913 and started the newspaper Ra'ad (Donner) in 1914 , one of two newspapers that appeared in Tehran at that time. Aynal Molk, father of future Prime Minister Amir Abbas Hoveyda , also worked for the newspaper . After this newspaper was banned too, he brought out a new paper called Bargh (lightning bolt).

In 1917 Seyyed Zia went to St. Petersburg and witnessed the February Revolution and later the October Revolution directly . This experience was to have a decisive influence on his later political career. Seyyed Zia had seen an individual, Lenin, determine the political development of an entire nation.

At the beginning of 1920, Seyyed Zia al Din was sent by Prime Minister Hassan Vosough together with the gendarmerie officer Kazem Saya as head of a business delegation to the newly formed states of Azerbaijan , Georgia and Armenia after the end of the First World War . The aim of the negotiations with the Azerbaijani government was to explore possible cooperation between the oil industry in Baku and the Anglo-Persian Oil Company . The negotiations started by Seyyed Zia had to be broken off after the occupation of Baku by Soviet troops. The Azerbaijani Minister of Industry and Mines Tlekhas was arrested by the Soviets and shot for “negotiating with the British imperialists”.

In 1921 Iran was on the verge of collapse as a state entity. There were Soviet troops in northern Iran who supported the establishment of an Iranian Soviet Republic in Gilan. In the south, under the leadership of General Ironside, were British troops who were supposed to protect the economic interests of the United Kingdom. After Hassan Pirnia's resignation , Ahmad Shah offered the office of Hassan Mostofi and Abdol Hossein Mirza Farmanfarma . Both refused. In the end, Fathollah Akbar Sepahdar agreed to assume the post of prime minister. The parliament elected in 1917 had still not been constituted. One of the prime minister's first tasks should be to finally convene the elected members of parliament for the constituent session of the fourth session of Parliament.

Another problem that needed an urgent solution was the further financing and the associated high command of the Persian Cossack Brigade . After the collapse of Tsarist Russia, there was no financial support from Russia. The British had set up their own local militia, the South Persia Rifles , in southern Iran . The Anglo-Iranian treaty of 1919 provided that the British would take over the further financing of the Persian Cossack Brigade. In return, all Russian officers should be dismissed and British officers take over command.

Seyyed Zia, who had turned from journalist to political activist after returning from Saint Petersburg, got involved in the political discussion and began to forge plans to overthrow Prime Minister Sepahdar's government. Seyyed Zia became a member of the "Iron Committee" ( Komiteh-e Ahan ), a political group that was originally founded by the British in Isfahan. The group's meetings were held at Seyyed Zia's home. Most of the members were pro-British Iranian politicians, including some MPs who were concerned about the growing influence of the Soviets in Iran. Mahmud Jam, who would later become Prime Minister, was also one of the members.

Seyyed Zia was in close contact with the British embassy and developed plans to create a new army strong enough to drive the Soviet troops out of northern Iran. The British Ambassador Norman, who was highly dissatisfied with the work of Prime Minister Sepahdar, saw in Seyyed Zia a possible new Prime Minister who was more in line with British political interests than Sepahdar. Norman and Seyyed Zia met regularly and developed plans for reforming Iran's finance and administration. British experts should reform the Iranian army, finance and administration. General Ironside, who commanded the British troops in Iran, had already made contact with the officers of the Cossack Brigade and initiated the first reforms. The Cossack Brigade, commanded by Reza Khan , in Aqa Baba, west of Qazvin , was apparently making the best progress, so General Ironside considered withdrawing British troops to Baghdad. Ironside obliged Reza Khan to enable the withdrawal of the British troops by ensuring the protection of Tehran from a communist takeover by the newly formed Cossack brigade.

A fall in the Sepahdar government was in the air. Seyyed Zia had initially contacted Brigadier General Mohammad Nakhjavan of the Cossack Brigade whether he would take over the military part of a coup against the Sephadar government. A little later, Seyyed contacted Zia Reza Khan, who was ready for the coup if he was given the high command of the Cossack Brigade in return. Ahmad Amir-Ahmadi described the events as follows:

“After the decision was made to send a larger unit of Cossacks to Qazvin , Brigadier General Reza Khan came to Qazvin with his troop contingent . He told me that he wanted to go to Tehran to talk to some influential people about whether he could become the commander of the Persian Cossacks . A few days later we met again in Qazvin, and he told me that he had discussed his plan with some people who would have no objection to his plan if the officers, who were more likely to be entitled to the post because of their seniority , did not object would raise. We decided that Reza Khan would write a letter to two senior officers, including my father-in-law Major General Mohammad Tofiqi Sardar Azim. I took the letters to Tehran and received their written consent that they would raise no objection if Reza Khan were promoted to command of the Cossacks. "

The time had come on the night of February 20th to 21st, 1921. Reza Khan and Seyyed Zia marched with 1,500 Cossacks to Tehran and deposed the government of Prime Minister Sepahdar. On February 22, 1921, Seyyed Zia was appointed Prime Minister by Ahmad Shah .

Already in the first days of his government, Seyyed Zia ran into serious difficulties when the governors of Fars , Mohammad Mossadegh , and Khorasan , Ahmad Qavam , refused to recognize the new central government. Seyyed Zia gave a fiery speech in parliament against the corrupt political class that tenaciously defended its privileges from the pre-parliamentary period and had brought the country to the brink of ruin. After his speech, he ordered a wave of arrests that Iran had not seen before. In a few days, Reza Khan's Cossacks, the gendarmes and the local police arrested over 60 leading figures from Iran's political life, including many members of the Qajar family. Among those arrested were former Prime Ministers Mohammad Vali Khan Sepahsalar Tonekaboni , Saad al-Dowleh , Abdol Majid Mirza Eyn-al-Dowleh and Abdol Hossein Mirza Farmanfarma and Seyyed Hassan Modarres . In addition, almost all large landowners in Iran were arrested. One month after the coup, around 200 people were arrested. It was not long before the families of those arrested organized a political campaign against Seyyed Zia, which was to result in constant unrest. Seyyed Zia informed the families that the arrested would be released immediately if they paid four million tomans in arrears in taxes. The families refused.

The only stabilizing force was the Cossack Brigade, led by Reza Khan. Reza, who initially had no position in Zia's cabinet as Commander in Chief of the Cossack Brigade, demanded and got the Ministry of Defense, replacing Masoud Keyhan . The dispute between Reza Khan and Tabataba'i broke out on April 21, 1921. Zia had appointed some British officers as advisory commanders without Reza Khan's knowledge. Reza ordered his soldiers not to obey orders from the British officers. Another conflict broke out on May 6th. Reza Khan demanded from Zia that the gendarmes who were under the Ministry of the Interior should be assigned to his ministry. After that happened, Reza controlled all armed forces.

Seyyed Zia's political reform program envisaged that Iran's entire legal system should be modernized and aligned with European standards. Seyyed Zia set up a reform commission to be headed by Mohammad Ali Foroughi . The Ministry of Finance was initially closed in order to fundamentally reform the tax and finance system. There was simply a lack of funds to stimulate the economy or to invest in infrastructure. The abolition of the rights of surrender for the British and Russians also made no progress. Seyyed Zia planned a land reform that would distribute the land of the large landowners to the peasants who worked on the land. At the given time, a completely unrealistic plan. The ban on selling alcohol and the opening of shops on Fridays and on religious holidays were enforced, which, however, angered the Christian Armenians and merchants against Seyyed Zia.

Ahmad Shah, who was initially positive about Seyyed Zia, no longer wanted to support Seyyed Zia's radical reform program. But above all to get the arrested politicians and nobles free, Ahmad Shah overthrew Zia. After consulting with Ahmad Shah, Reza Khan called on Zia on May 23, 1921 to resign and leave the country. He gave him 25,000 tomans in cash to cover his travel expenses. Zia resigned and left Tehran. On May 24th, all political prisoners were released.

Seyyed Zia first spent the following years in Europe. For a while he tried to sell carpets in Berlin , then he moved to Geneva , where he tried in vain to publish a book. Then he opened a carpet trade in Montreux . In December 1931, he was elected Secretary General of the General Islamic Congress in Jerusalem . In this role he developed plans for the Islamic University, the establishment of which had been decided at the Congress. Accordingly, the university should have three faculties, one for theology and Islamic law, one for medicine and pharmacy, and one for engineering. To make the project a reality, Seyyed Zia traveled to Iraq and India in 1933 with Mohammed Amin al-Husseini to collect donations. However, the financial result of the trip fell short of expectations, so that he gave up the project of the Islamic University.

After 17 years he left Europe and moved to Palestine to try his hand at farming.

His life in exile ended in 1943. He returned to Iran and was elected to the Iranian Parliament as a member of the city of Yasd for the 14th term .

Seyyed Zia Tabataba'i died in Tehran on August 29, 1969 at the age of 81. He was buried in Rey . After his death, Tabataba'i's house in northern Tehran was confiscated and made available to the SAVAK . It was later converted into a prison ( Evin prison ). Tehran's central prison is still on the site today.

Prime Minister of the Islamic Republic of Iran