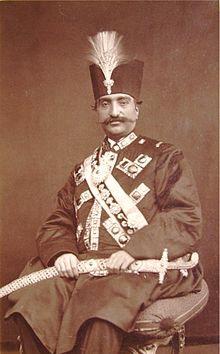 Nāser ad-Din Shah with his ministers

Nāser ad-Din Schāh (also Nasreddin Schah and Nasr-ed-Din , Persian ناصرالدین شاه[ nɑserɛddiːn ʃɑh ]; *  July 16, 1831 in Tabriz ; † May 1, 1896 in Tehran ) was Shah of Persia from 1848 to 1896 . Naser ad-Din Shah, the eldest son of Mohammed Shah , came from the Qajar dynasty . Through his long, absolutist reign, he had a decisive influence on the development of Persia in the second half of the 19th century. Naser ed-Din Shah was married to 25 women who gave birth to 14 sons and an unspecified number of daughters.

Its first prime minister, Mirza Taqi Khan Farahani, known as Amir Kabir , is considered one of the most capable Iranian politicians of the 19th century. His travels to Russia and Turkey made it clear to him that it was time to tackle the reforms that had begun in Azerbaijan under Abbas Mirza and abruptly ended under Mohammed Shah with the murder of Prime Minister Qaem . In order to bring Persia out of its backwardness, he began an industrialization program by setting up small factories in Isfahan , Tehran and Sari , and he began to systematically extract raw materials through the construction of mines. According to Amir Kabir's ideas, Persia should develop into a modern industrial nation of the European model on its own. He reformed the educational system and had the first technical university ( Dar-ol Fonun ) built in Tehran in 1851, following the example of European universities .

25 years after Amir Kabir's assassination, another prime minister, Mirza Hosein Khan Moschir al Dowleh , tried to persuade Naser ad-Din Shah to carry out reforms. He persuaded him to travel to Europe to get an idea of ​​the progress of social developments in Europe. Naser ed-Din Shah made three trips to Europe and visited most of the capitals of the continent. From his diaries it emerges that he did not particularly value Europe and especially the European forms of government. The first trip made in 1873 took him from Russia via Germany, England, France, Switzerland and Italy to Austria to the Vienna World Exhibition . Persia was represented there with its own exhibition building, the Persian House. Johann Strauss (son) had composed a Persian national anthem for the visit in order to be able to receive the guest correctly according to European standards.

Naser ad-Din granted concessions to foreign persons and companies. The concessionaire had to make an advance payment and an annual levy. In addition, there was a percentage stake in newly founded companies. The concession was usually associated with a monopoly . On the basis of concessions, Persia received a postal system during the reign of Naser ed-Din Shah , the first railroad between Tehran and Rey and a British bank, the Imperial Bank of Persia , which was the only bank authorized to print Persian banknotes. and thus acted both as a commercial bank and as the Persian national bank. The railway construction concession granted to Paul Julius Reuter in 1872 , with which a multitude of subsequent rights (expropriations, land and mining rights) was connected, as well as the tobacco concession granted to the British Major Gerald F. Talbot in 1890 became known. The company registered in London with a capital value of £ 650,000 and which was to administer the tobacco monopoly concession was to generate an annual profit of £ 500,000, 25% of which would be distributed to the Persian government, i.e. to Naser ad-Din Shah and his court should. The tobacco monopoly met resistance from the Iranians and sparked an uprising ( tobacco movement ) because it robbed many local tobacco traders of their existence and also increased tobacco prices. The Shah had to withdraw the concession and compensate the concessionaires with the help of a foreign loan of £ 500,000. The UK funded loan carried 6% interest and charged the Persian Treasury with £ 30,000 in interest per annum, with no consideration from the Persian State. With this loan, the first Iranian national debt arose.

Naser ad-Din Shah was not very successful in foreign policy. In 1863 he lost Herat to the Emirate of Afghanistan .

From 1848 onwards, Naser ad-Din Shah had the newly emerging religious movement of the Babists and Baha'i systematically pursued. The persecution intensified after two Babi carried out an unsuccessful attack on Naser ed-Din Shah in revenge for the public fusilation of Bab Sayyid Ali Muhammad . The Islamic theorist and political activist Jamal al-Din al-Afghāni turned against the absolutist rule of Naser ad-Din Shah and criticized him publicly. He was arrested, tortured and exiled in Anatolia .

At the beginning of Nasreddin Shah's reign, Persia had no organized military, let alone an army. Naser ad-Din Shah tried, mainly with the help of Austria, to reform his army. In 1878 it was agreed that an Austrian military mission would be sent to Persia to set up the “ Austrian Corps ”, an elite Persian unit. On his second trip to Europe, which also took him to Russia, Naser ad-Din Shah took on a parade of Russian Cossacks . He was so impressed that he asked the Tsar to help set up a similar force in Iran. In 1879 a military agreement was signed between Persia and Russia, the aim of which was to build up a Persian Cossack brigade from Iranian teams and Russian officers. The establishment of the Persian Cossacks took place parallel to the establishment of the Austrian corps. With the military reform initiated by Naser ad-Din Shah by Austrian and Russian officers, the finances of Persia were hopelessly overwhelmed. The Austrians largely gave up their efforts after three years. Tsarist Russia pursued both economic and political interests with the Cossack Brigade and financed the pay of the Persian Cossack Brigade from its own resources at times. The Persian Cossacks were later increased to divisional strength and remained under the command of a Russian officer until 1920. It was not until 1922 that Reza Khan integrated the division into the newly created Iranian army and ended the command of the Russian officers. The Cossack Brigade helped Naser ad-Din Shah maintain his autocratic rule despite increasing criticism.

During this time, the Iranian national flag was also modified. Until then, the lion and the rising sun were considered symbols of Persia. Nasreddin Shah had the curved sword added to illustrate Iran's ability to defend itself against internal and external enemies.

On May 1, 1896, Nāser ad-Din Shah visited the Abd-al-Azim shrine near Tehran. After leaving the mosque, a bystander, Mirza Reza Kermani , shot the Shah and seriously wounded him. The Prime Minister Ali Asghar Khan Atabak carried the lifeless man into his carriage waiting in front of the mosque and drove back to Tehran. Naser ad-Din Shah sat upright in his carriage and Atabak waved the dying man's arm at the crowd to cover up the attempted murder. That evening, Naser ed-Din Shah died.

Kermani was immediately arrested, interrogated and hanged. However, the interrogation records do not show Kermani, who was a follower of Jamal ad-Din al-Afghani , as a religious fanatic, as is often claimed. During the interrogation, Kermani said that he firmly believed that the social and economic situation in Iran could only be changed if the absolutist rule of the Qajars was ended. He made the Shah personally responsible for the negative influence of British speculators and the bribery and corruption of the Iranians and for the desolate economic situation in Persia.

With the death of Naser ad-Din Shah, the era of absolutist rule in Persia came to an end. Under his successor Mozaffar ad-Din Shah , Persia received its first constitution in 1906 as a result of a constitutional revolution .

Sven Hedin had visited Nāser ad-Din Shah in Tehran in the spring of 1890 and described it as follows:

“At the front of the hall, between the only floor-to-ceiling window and the peacock throne , stood Shah Nasreddin. The peculiar throne, like a large chair with a backrest and an extended seat and steps, was covered with thick gold plates and set with precious stones. It once belonged to the Grand Mughal in Delhi ; almost two hundred years ago Nadir Shah had conquered it on his Indian campaign. - Nasreddin Shah was dressed in black and wore forty-eight huge diamonds on his chest and three large emeralds on each shoulder piece. He had a diamond on the black cap agraffe and was covered on the side of a curved saber, whose scabbard with jewels. He looked at us steadfastly; his demeanor was regal, he stood there like a real Asian despot, aware of his majesty and power. "

Hedin was wrong here, the original peacock throne was long lost at this point. His description suggests that he saw the " Nader Throne ".