from Wikipedia, the free encyclopedia
This is the spotted version , flagged on July 13, 2020 . There is 1 pending change that has yet to be viewed. 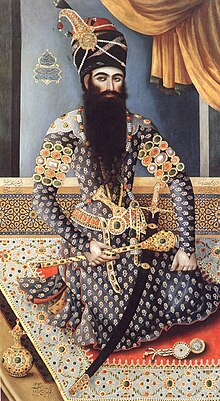 He ruled from 1797 to 1834 and ascended the throne as the successor to his murdered uncle Aga Mohammed Khan . Suspicious of his Grand Vizier Haj Ibrahim Khan Kalantar , he had him executed. Kalantar had already been Grand Vizier for a total of 15 years under the previous dynasty, the Zand princes .

During his long reign, Fath Ali Shah fought several wars, including the Russo-Persian War against Alexander I over Georgia , which had brought Russia under its control and which was claimed by Persia . This war started in 1804 and ended in 1813.

Fath Ali Shah first turned to the United Kingdom . However, that refused a military agreement with Persia, as it was allied with Russia. Fath Ali Shah then asked for support in France, which was at war with Great Britain, Prussia and Russia, and sent a delegation to Napoleon I , who was at the time in Finckenstein Castle in East Prussia. Napoleon concluded the Treaty of Finckenstein with the Persian delegation there on May 4, 1807 , in which Persia was promised extensive military and material support. In return, Persia should declare war on Britain and expel all British citizens from Persia. Furthermore, Persia was to influence Afghanistan to carry out a joint Franco-Persian-Afghan invasion of India .

The Russian troops suffered a heavy defeat against the French troops on June 14, 1807 in the Battle of Friedland . Tsar Alexander I then started negotiations with the French side, which initially led to an armistice on June 23. On June 25, the peace negotiations finally began in Tilsit between Napoleon I and Tsar Alexander I, which led to the Peace of Tilsit on July 7, 1807 . After Russia entered the continental blockade against the United Kingdom , Fath Ali Shah resumed negotiations with the British for support against Russia. For this reason, Fath Ali Shah refused to participate in the continental blockade. Despite the Treaty of Finckenstein, France therefore failed to win the diplomatic war over Persia and none of the treaty points were realized. On March 12, 1809, the United Kingdom signed a treaty with Persia that repealed the Treaty of Finckenstein and expelled all French from Persia.

In the course of the war, Russian troops attacked Tabriz in 1813 , forcing Persia to accept the Treaty of Golestan and surrender large areas of its territories in Georgia, Arrān (present-day Azerbaijan ) and the Caucasus . In 1826 war broke out again with Russia , which ended again in 1828 with a Russian victory and the Treaty of Turkmanchai in favor of the victor. According to the Treaty of Turkmanchai, the Macaw was chosen as the border between the two empires.

When his son and Crown Prince Abbas Mirza died, his grandson Mohammad Mirza became Crown Prince. Fath Ali Shah would only survive Abbas Mirza by a year. He died in 1834 and received his final resting place in front of the shrine of Fatima Masuma , whom he had greatly adored.

It is documented that Fath Ali Shah had 160 wives who gave birth to 108 offspring (60 sons and 48 daughters). Abbas Amanat assumes 260 children, with 60 sons and 55 daughters outliving their father. Other sources speak of 700 women and more than 5,000 children if you add up all concubines and love affairs. For this reason he was also called the father of his country .