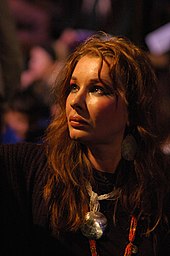 Natacha Atlas in concert with Transglobal Underground at the TFF , Rudolstadt , 2009

Natacha Atlas (born March 20, 1964 in Brussels ) is a Belgian musician who combines Arabic and African elements in modern electronic music . Her family roots stretch from Egypt to Palestine to Great Britain , most of her life she traveled around the world, her residences were already in Brussels, Greece , Egypt and Great Britain. The experience of different cultures influenced her and her music a lot.