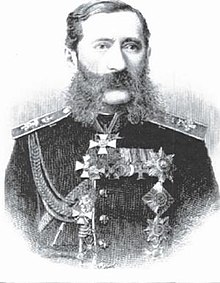 Count Loris-Melikow, son of an Armenian merchant of noble birth, was educated in the guard junior school in Petersburg, joined the guard hussar regiment of Grodno in 1843 as a cornet , became adjutant to General Vorontsov in the Caucasus in 1847 and participated in the fighting there. He became major in 1851 , commanded a legion formed from different tribes as a colonel at the siege of Kars in 1854 , after the conquest of this fortress was its governor and major general, in 1863 lieutenant general, 1865 adjutant general, in 1875 cavalry general and Grand Duke Michael attached.

In 1876 appointed commander of the Caucasian Corps established in Armenia , he crossed the Turkish border in the Russo-Turkish War (1877-1878) on April 24, 1877 near Alexandropol with the same, enclosed Kars and penetrated in a rapid victory run to the vicinity of Erzurum before, but suffered a severe defeat when Muhtar Paschas attacked the position near Sewiu on June 25 and had to lift the siege of Kars. An attack on the well-advanced Turks on August 18 also failed, and on August 25, Muhtar Pasha wrested the position of Bashkadiklar from the Russians in the Battle of Kizil-Tepe . On October 15, however, Loris-Melikov won the battle in the Aladscha Mountains , captured the Kars fortress on November 17 and won again at Deweboyun on December 4 .

He was charged on 29 April 1878 in the rank of count and the beginning of 1879 Governor General of the province of Astrakhan , Samara and Saratov appointed. There he successfully fought the plague epidemic that broke out again . After successfully suppressing the plague, on April 20 he was given the post of Governor General of Kharkov , where he showed as much prudence as he was firm in suppressing nihilistic activities. The misdeeds of the nihilists and the increasing danger are the reason for the appointment of Loris-Melikov as head of a supreme executive commission (February 24, 1880).

After an explosion of a dynamite load had shaken the Winter Palace in Saint Petersburg in February 1880 , Loris-Melikov was appointed to the head of the Supreme Executive Commission . An assassination attempt by a nihilist against Loris-Melikow , in which Loris-Melikow was unharmed (March 3), increased his popularity. He wanted to fight nihilism not only with violence, but also through reforms . In August 1880 he was appointed Minister of the Interior; as such he exercised a very energetic, far-reaching and promising activity and also induced Alexander II to plan to appoint a kind of popular representative body. The assassination of the Tsar in March 1881 thwarted the realization. A friend published the design in London in 1893 under the title Konstituzia Grafa Loris-Melikowa . The Third Division , which was previously under the control of the Tsar, was subordinated to the Ministry of the Interior and transferred to Loris-Melikov.

Under Alexander III. Loris-Melikov's position proved untenable as a result of the influence of the Moscow Party, and he was dismissed on May 16, 1881 and replaced by Count Ignatiev .