Taldorf is a village in the city of Ravensburg in Baden-Württemberg.

The village of Taldorf is the largest district of the city of Ravensburg in terms of area.

The village is located in the southwest of the urban area and is divided into four residential districts:

(Population of the residential districts as of December 31, 1996)

Taldorf was first mentioned in 752 as the center and court of a mark. The place had different owners, including the Counts of Veringen , the Counts of Montfort , later the Imperial Abbey of St. Georg in Isny and the Lords of Schmalegg . In 1384 the Isny ​​Abbey sold its rights to the Ravensburg patrician Segelbach family, who were followed by a Ravensburger named Wegelin, whose heirs sold their property to the Weißenau monastery in 1435 . The Schmalegger property in Taldorf was initially transferred to the imperial city of Ravensburg and later also to the Weißenau monastery. In 1823 the layout of the municipality of Taldorf changed completely due to a municipality reform by the royal government for the Danube district : four hamlets were converted into the new municipality of Oberteuringen , the dissolved municipality of Eggenweiler became Oberzell and nine hamlets to districts of Taldorf. 1842 Taldorf was from Oberamt Tettnang to Oberamt Ravensburg reclassified (the precursor of the district Ravensburg). On February 1, 1972, the independent municipality of Taldorf was incorporated into the city of Ravensburg. The residential district of Taldorf is still characterized by agriculture today.

Oberzell (with the parish church of Our Lady of Sorrows)

Bavendorf was the seat of a noble family of Guelph vassals, a member of which Heinrich von Bafindorf is named as a member in 1172. The monasteries Weingarten and Kreuzlingen and the merchant family Humpis later owned property in Bavendorf . Jos Humpis handed over his rights in Bavendorf to the Ravensburger Heilig-Geist-Spital in the early 16th century. Bavendorf is now a street village on Bundesstraße 33 , which is characterized by housing developments.

In the Adelsreuter Forest there are traces of settlement in the Hallstatt period . The place Adelsreute was first mentioned in 1134 as Adilsruti , when a Guntram von Adelsreute († 1238) gave his village Salmannsweiler to the Cistercian order , who founded the Salem Monastery there. Guntram himself entered the monastery, his goods in Adelsreute were henceforth run as own operations of the Salem monastery. With the secularization of 1803, the place with the Reichsabbey of Salem fell to Baden . The community then belonged to the Salem Office, from 1843 to the Meersburg District Office and in 1857 to the Überlingen District Office, from which the Überlingen district emerged in 1939 . Until Baden-Württemberg was founded in 1952, Adelsreute was an exclave from Baden within Württemberg. The exclave status at the district level lasted until 1969, because it was not until January 1, 1969 that the Adelsreute community was joined by the Überlingen district to the Ravensburg district. On October 1, 1974, the community was incorporated into the city of Ravensburg and assigned to the village of Taldorf. The suburb of Tepfenhart, which had always been part of the Adelsreute family estate, was added to the Horgenzell community two months later, on December 1, 1974 .

Under canon law, the formerly Baden territories of Adelsreute and Tepfenhart still form exclaves of the Archdiocese of Freiburg, which includes the formerly Baden and Hohenzollern areas. However, they are looked after by the diocese of Rottenburg-Stuttgart, which covers the area of ​​Württemberg, in pastoral care.

As the "Taldorf residential district", the village represents 3 of the 32 Ravensburger municipal councils. These are chosen in " false sub-locations ".

The town hall with the local administration is located in Bavendorf. The Christian Democratic Union (CDU) and the Local Political Working Group Taldorf (KAT) are represented in the local council.

Schultheißen, Mayor and Mayor (since 1811)

Coat of arms of the former municipality of Adelsreute

Honorary citizen of the community of Taldorf (incomplete)

Winner of the local medal of merit (incomplete)

From 1903 to 1974 the municipality of Adelsreute had a coat of arms based on the coat of arms of Guntram von Adelsreute. Description: In red on a green ground, a striding silver ram .

Since the incorporation into Ravensburg, both coats of arms are no longer in official use, but are still used unofficially by the village.

The village of Taldorf has a partnership with Hittisau in Vorarlberg (Austria). The partnership emerged from the friendly connection between the soldiers' associations in both places. 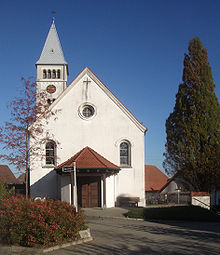 There are four independent Roman Catholic parishes in Taldorf:

The pastoral care for the parish of Oberzell is taken over by the pastor of Weißenau , for Bavendorf, Eggartskirch and Taldorf the pastor of the Trinity parish in Ravensburg-Weststadt is responsible.

The Evangelical Church in Bavendorf was built in 1926 according to plans by the Stuttgart architect Wilhelm Hermann Jost . In 1963 she received an organ from the Richard Rensch organ building workshop in Lauffen am Neckar. It was initially a branch church of Wilder-Winterbach ; Bavendorf has been an independent parish since 1968. She is responsible for the entire village of Taldorf. The rectory, parish hall, kindergarten and church are located in Bavendorf. Some Protestant services are celebrated as guests of the Catholic parishes in the two Catholic churches in Oberzell and in the Riesenhof diaconal facility of the BruderhausDiakonie in Bavendorf. The congregation belongs to the deanery Ravensburg and has 935 congregation members (status: 2004).

All four Catholic parish churches and the chapels in Alberskirch and Wernsreute are surrounded by church cemeteries that are still in use today . The cemetery in the churchyard of the small chapel in Eschau is only used for the deceased of the families living in the three farmsteads of the hamlet, who also take care of the care and maintenance of the chapel and the cemetery. A Protestant cemetery is adjacent to the Protestant church in Bavendorf.

The townscape of Taldorf with its many individual farms and living spaces is still characterized by agriculture. The special crops of the Lake Constance region dominate, including fruit growing (mainly apples), strawberries, hops and asparagus. Fruit, strawberries and asparagus as well as homemade juices and schnapps are often sold in farm shops. Wine made from the Müller-Thurgau grape variety is grown on a small local vineyard in Taldorf .

Most of the working residents do not work in agriculture, but commute to Ravensburg or other places in the middle of the Schussental.

Craft and service companies have settled in Oberzell in particular, including the Munzinger-Archiv publishing house . The village of Taldorf is also the seat of the Raiffeisenbank Taldorf and a branch of the Kreissparkasse Ravensburg (in Oberzell).

The Erlen industrial park has been under construction north-west of Bavendorf on Bundesstrasse 33 to Ravensburg since 2010. In 2011 the “Center for Optical Control and Logistics” of Vetter Pharma was opened as the first company .

The federal highway 33 (Ravensburg - Meersburg ) runs through Bavendorf . In Oberzell there is a stop on the southern railway line (Ulm - Friedrichshafen), which is served by the Bodensee-Oberschwaben-Bahn . Public buses connect the districts with each other and with the Ravensburg city center.

Oberzell: Parish Church of Our Lady of Sorrows 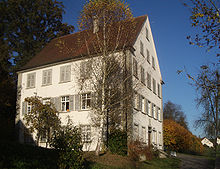 The listed steel bridge over the Schussen near Oberzell was replaced by a new building in 2008, the old bridge was dismantled and stored.

Since 1965 the children's and homeland festival has been celebrated every two years . The highlight is a pageant in Oberzell.

The Swabian-Alemannic Fasnet has been celebrated in the village of Taldorf since the 1990s , the driving force of which is the Oberzell fools 'guild , founded in 1998 from the Gillenbach witches , and the Bavendorf fools' association founded in 1992 . The Bavendorfer fool's figure is called Bavi-Hex, in Oberzell there are, in addition to the Gillenbach witches, the figures Hotterlochweible, Hagmacher and the three individual figures Graf vom Gillenbach (taken from the local carnival celebrated 1953–1972), Büttel and Bauer.

In the village of Taldorf there are around 50 clubs and groups that play a major role in local life. Club events take place in the sports and multi-purpose hall Schussentalhalle in Oberzell.

In addition to church groups, the following also contribute to club life: the sports clubs SV Oberzell and Oberzell tennis club, music clubs in Oberzell, Bavendorf and Taldorf, a choir community, the fools' guilds, the Oberzell fanfare group, the Bavendorf VCP, the rural youth, the rural women, the volunteer fire brigade and the Blood rider groups Bavendorf and Taldorf who take part in the annual Holy Blood procession in Weingarten .

Wikisource: Thaldorf in the description of the Oberamt Tettnang from 1838  - sources and full texts