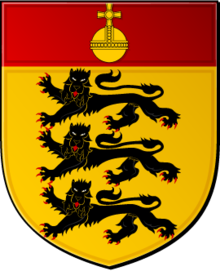 The Waldburg in Upper Swabia

The Waldburg family is a noble Swabian noble family. The ancestral castle of the original Welfisch - Hohenstaufen ministerial family , which has been documented since the middle of the 12th century, is the Waldburg in the municipality of Waldburg in the Ravensburg district in Upper Swabia .

Origins of the Waldburg House

The first member of the family known by name is Cono von Waldburg (also Cuno or Kuno ), abbot of Weingarten Monastery (1108– † 1132). He wrote the Augustine Commentary and probably the Genealogia Welforum . A Gebhard von Waldburg has also been named for the year 1123.

With the death of the two of them, the older Waldburg house became extinct in 1210 in the male line.

Coat of arms in the Sempach Chapel, 1386

Coat of arms flag on the forest castle

The Tanne servants took over ownership and offices of the older Waldburg family. Most likely they were related to that one. The von Waldburg and von Tanne were among the service men, so "ministerials" of the Welfs . After the death of Welf VI. in 1191 they became ministerials to the Staufer dukes.

Eberhard von Tanne-Waldburg (1170– † 1234) is considered to be the actual progenitor of the Waldburg family, which has had this name since 1217. Eberhard was first called Reichstruchseß in 1225. His nephew was Schenk Konrad von Winterstetten . Both worked as guardians and advisers to King Henry VII from 1220 to 1225 . At that time, the imperial regalia were kept in the forest castle.

The following personalities are known during the reign of Emperor Friedrich II and his sons: Two bishops of Constance, Eberhard II Truchseß von Waldburg, Archbishop of Salzburg 1200– † 1246, Count of Regensberg 1269– † 1291, Bishops of Brixen, Strasbourg and Speyer . They also provided the imperial protonotary for many years. This corresponds to the governor of the king.

Around 1214, the house was given the management of the office of chief servant in the Holy Roman Empire . From 1419 to 1806 the office was part of the name (Truchsess or from 1525 Reichserbtruchsess von Waldburg). In addition to the office of trustee, they had the office of gift giving from 1196 and the office of marshal from 1198.

After the fall of the Hohenstaufen dynasty , the Waldburg family succeeded in establishing itself as an aristocratic family directly under the empire. In the 14th century, the Waldburgers were in the favor of Emperor Ludwig of Bavaria as well as the Habsburgs . They took possession of the town of Isny , the Trauchburg and the Zeil rule, and in 1406 they also obtained the pledge of the five towns of Mengen , Munderkingen , Riedlingen , Saulgau and Waldsee . Thus the territory of the Waldburgers had grown considerably in the course of the 14th century.

In the 15th century, representatives of the Waldburg family were often bailiffs in Upper and Lower Swabia.

Coat of arms of fir

There is possibly a connection to the Lords of Dahn (Than) and the Dahner Burgengruppe .

Division of property from 1429

In 1429 the house ownership was largely divided into three lines. The stewardess Johannes II. (Or Hans II.) Left three sons entitled to inherit on his death in 1424. Son Eberhard I (1424–1479) founded the Sonnenberg line, which had already died out in 1511. His brother Jakob (or in the spelling Jacob , † 1460) was the progenitor of the Jacobean line, which owned the Trauchburg rulership with Kißlegg and Friedberg-Scheer together with Dürmentingen . The Jacobean line died out in Swabia in 1772, whereas the evangelical side line Waldburg-Capustigall , which had existed in East Prussia since the Reformation, only died out in the male line in 1875. The third of the brothers involved in the division of 1429 was called George I († 1479). He founded the Georgian line, which in 1595 was divided into the lines Zeil (still existing today as Walburg zu Zeil and Trauchburg ) and Wolfegg (today as Waldburg-Wolfegg-Waldsee ).

The connection between the three major lines Waldburg-Sonnenberg , Waldburg-Trauchburg and Waldburg-Wolfegg-Zeil was made by these three brothers and their wives:

Overview of the divisions

Both the castle and the rule Waldburg were considered imperial fiefs. Trauchburg's own property was also converted into an imperial fief in 1429. In addition, the Waldburg family came into the possession of Habsburg pledges in the course of the 14th century. These included the rule of Kallenberg, the county of Friedberg, the rule of Scheer, the rule of Bussen and the Danube cities of Saulgau, Mengen, Riedlingen and Munderkingen. The affected residents in the pledges, however, still felt themselves to be subjects of the House of Habsburg and therefore resisted the rule of the House of Waldburg for centuries with varying intensity through obedience and tax refusal. In particular, the Jacobean line with the counties of Trauchburg and Friedberg-Scheer got caught up in a never-ending vortex of overwhelming debts and the associated disputes with the subjects who saw themselves heavily taxed in the centuries that followed. It was characteristic that all Upper Swabian lines of the Waldburg family adhered to Catholicism. To be Catholic and to be in the service of the emperor and empire was part of the self-image of the house. Only the Waldburg-Capustigall line in East Prussia had become Protestant during the Reformation and produced a number of Prussian court masters, ministers and generals.

The Eberhard or Sonnenberg line lasted only a short time and ended with the murder of Count Andreas. The representatives of the line owned the counties Sonnenberg and Friedberg-Scheer. The most important descendant of the line is the humanistically educated Count Otto, who headed the diocese of Constance from 1475 to 1491.

The Jacobean line determined the politics of the Waldburg family in the Upper Swabian region for centuries and also produced an offshoot in East Prussia with the Waldburg-Capustigall line. Important representatives of the Waldburg-Trauchburg line are Wilhelm the Elder , his son Otto and the failed Elector Gebhard of Cologne . The notoriously heavily indebted Jacobean Line died out in 1772 shortly before the end of the Holy Roman Empire. The later princes of Waldburg-Zeil took over the inheritance.

Imperial Count of Waldburg I 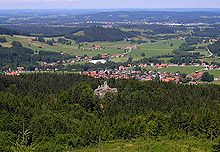 Ruins of Alt-Trauchburg Castle , in the background the border and Isny 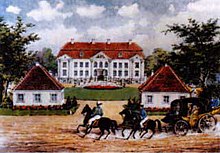 The third and youngest line of the House of Waldburg, which emerged when the year 1429 was divided, existed in several branches at the end of the Holy Roman Empire. An important representative at the beginning of this line is head dresser Georg III. von Waldburg , also known as Bauernjörg, who, as a military leader of the Swabian League in the Peasants' War in 1525, played a decisive role in the suppression of the uprisings. The Georgian Line made large profits from the events of the Peasants' War in areas where peasant revolts had been put down and collected substantial ransom money. Stewardess Georg III. commissioned the humanist and canon of Augsburg, Matthäus von Pappenheim, to write a chronicle of the Waldburg Truchessen, which he wrote in 1526 and 1527. This family history valuable chronicle also contains colored woodcuts by Hans Burgkmair the Elder with images of knight figures from the history of the house. In 1595 the Georgian line split into the Wolfegg and Zeil lines. Count Maximilian Willibald von Waldburg-Wolfegg had successfully defended the cities of Lindau and Constance against the advancing Protestant Swedes with his army for the Catholic imperial troops during the Thirty Years' War . The resulting imperial debt could never be paid to the Waldburg family. In the year of the Reichsdeputationshauptschluss 1803, the 475 square kilometer Principality of Waldburg was formed, which, however, was mediatized as early as 1806 and fell largely to the Kingdom of Württemberg and a smaller part to the Kingdom of Bavaria . The princes of the three lines Waldburg-Wolfegg-Waldsee, Waldburg-Zeil-Trauchburg and Waldburg-Zeil-Wurzach had as lords in the 19th century ever a mandate in the First Chamber of the Württembergische estates and in the Chamber of Councilors of the Bavarian Parliament . Members of the Waldburg-Zeil-Trauchburg line emerged as particularly politically active. Prince Maximilian von Waldburg-Zeil quarreled with his new sovereign Friedrich von Württemberg . Maximilian's grandson Constantin von Waldburg-Zeil was a member of the Frankfurt National Assembly and had to spend some time as a prisoner at Hohenasperg fortress in 1850 because of lese majesty . Even after the nobility's privileges were abolished in 1919, the family remained very present in public and extremely active in local politics. Alois von Waldburg-Zeil was active in federal politics and was a member of the German Bundestag as a member of the CDU from 1980 to 1998 . As church patrons , the heads of the Waldburg family still hold on to their patronage and presentation rights in the Catholic Church in their former territories. 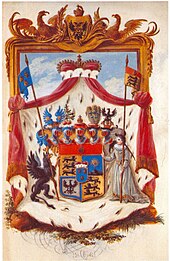 Coat of arms of the Waldburg family in the Prince's diploma from March 21, 1803 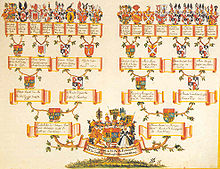 Counts and princes of Waldburg-Zeil-Wurzach

Before the great division of 1429:

Eberhard line after the division of 1429:

Jacobean lines after the division of 1429:

Georgian lines after the division of 1429:

Castles and palaces are still owned by the family

The castles and palaces of the Waldburg family include (as of 2005):