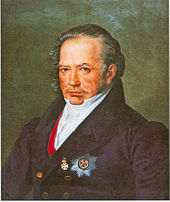 Prince Joseph Anton von Waldburg zu Wolfegg and Waldsee (* February 20 or 21, 1766 in Waldsee ; † April 3, 1833 ibid) was a territorial lord of the outgoing Holy Roman Empire . He came from the line Waldburg-Wolfegg-Waldsee of the Catholic noble family of Truchsesse von Waldburg in Upper Swabia .

Joseph Anton was the son of Count Gebhard von Waldburg-Wolfegg-Waldsee (1727–1791) and Countess Maria Clara (1733–1796), born Countess von Königsegg-Aulendorf . In 1803 Joseph Anton became the first prince of Waldburg zu Wolfegg and Waldsee as part of the elevation of the entire Waldburg house to the imperial prince status. The entire Waldburg house had paid 90,000 guilders for the process of raising the status. The company hoped that the investment would avoid the threat of mediatization . Nevertheless, the mediatization took place in 1806 and Joseph Anton became a registrar in the Kingdom of Württemberg , although he would have preferred, as he had written to his Chancellor von Sonnethal in March 1806, to be mediatized by Bavaria.

All in all, Joseph Anton showed a little more inclination to become a middle-class private man and landowner than his cousin Max Wunibald von Waldburg-Zeil , who only reluctantly and with Christian devotion submitted to the inevitable fate. Joseph Anton bid farewell to imperial immediacy with composure and the willingness to become a good citizen in the newly created kingdom. According to Article 24 of the Rhine Confederation Act , all of its territories benefited the state of the Protestant King Friedrich . The formal handover took place on September 11, 1806 in the castle in Wolfegg to Napoleon's adjutant general and the Württemberg commissioner Eugen von Maucler . When the king's homage in Stuttgart was scheduled for January 6, 1807, Prince Joseph Anton was excused due to illness.

The withdrawal of all previous income by the Württemberg state proved extremely onerous. Contrary to the provisions of the Rhine Confederation , by ordinance of May 10, 1809, the state lords of Württemberg lost their tax exemption as well as the patrimonial jurisdiction and power of disposal over the local police. The prince's increasingly desolate financial situation forced him to be extremely frugal, as the staff in particular still had to be paid. In addition, on November 11, 1809, an ordinance made it compulsory to live in Stuttgart for several months a year. Like his peers, Joseph Anton felt politically disempowered, economically ruined and humiliated. The struggle to return to the old territorial power at the Congress of Vienna was doomed to failure, but with Article 14 of the German Federal Act of June 8, 1815, Joseph Anton saw important privileges as a civil servant secured.

These included freedom of residence, family autonomy, preferred place of jurisdiction, own local police, patrimonial and forestry jurisdiction, patronage rights and exemption from military service. From 1815 to 1819 Prince Joseph Anton Viril was a voter at the meetings of the estates in Stuttgart to draft the proposed Württemberg constitution. However, he never appeared in person at the meetings, but was represented. From 1819 until his death he held a seat in the First Chamber of the Württemberg Land estates , but never came to the Landtag in person. For him, retreating into private life after the traumatic experiences of mediatization in the age of Napoleon under King Friedrich von Württemberg remained decisive.

Prince Joseph Anton with his wife Maria Josepha geb. Fugger-Babenhausen and some children against the backdrop of the forest castle; Gouache on paper, Waldburg-Wolfegg art collections