Dahn is a town in the district of Südwestpfalz ( Rhineland-Palatinate ) and is the fourth largest municipality in terms of population. It is the administrative seat of the Dahner Felsenland community , within which it is the largest local community in terms of both number of inhabitants and area. Dahn is a state-approved climatic health resort and designated as a middle center according to state planning .

The city is located in the Palatinate region at 210  m above sea level. NHN . Your settlement area is located in a valley of the Dahner Felsenland belonging to the Dahn-Annweiler Felsenland , which belongs to the southern Palatinate Forest , the German part of the Wasgau . The extreme west of the district already belongs to the so-called southwest Palatinate Forest , alternatively called Bitscher Waldniederung . The border with Alsace in France runs just 10 km south .

Louder between Hinterweidenthal and Dahn

Dahn is traversed from northwest to southeast by the Lauter , which is called Wieslauter on the upper reaches and is a left tributary of the Rhine . The north-west running Seebach rises in the north and flows into the Lauter in the Hinterweidenthal district. In the northeast, the Mühlenbach forms the border with Hauenstein for a short distance. The Moosbach runs through the north-west of the forest markings and takes in the Moosgraben from the left and the Seibertsbach from the right and finally also flows into the Lauter from the right. The Heimbach flows along the southern edge of the development . The Langenbach partially forms the border to Erfweiler and Schindhard. The small Büttelwoog reservoir also extends southwest of the settlement area .

In the southwest of the district, directly on the border to Fischbach bei Dahn, the Spießbach and its left tributary Roßbach arise , which drain over the Sauer .

Historical view of the Dahn castles from the 19th century

The Knights of Than , feudal men of the Prince-Bishop of Speyer , ruled the place for over four hundred years; As was often the case in the Middle Ages, the place near the castle was named after the sex of the - mostly chronologically first - noble family. In the 15th century, the so-called Four Lords War was partially fought on the territory of Dahn. From the extinction of the knight dynasty in 1603 up to the French Revolutionary Wars (1792/97), Dahn was the seat of an office of the bishopric of Speyer , over which the taverns of Waldenburg temporarily ruled; Dahn had already found itself under French sovereignty during the second half of the 18th century.

From 1798 to 1814, when the Palatinate was part of the French Republic (until 1804) and then part of the Napoleonic Empire , Dahn was the seat of a canton of the same name . In 1815 the place Austria was added. Just one year later, the community moved to the Kingdom of Bavaria . From 1818 the place was part of the Landkommissariat Pirmasens , which was converted into a district office in 1862.

In 1939 Dahn was incorporated into the district of Pirmasens (from 1997 district of Südwestpfalz ) . Since the place was in the Red Zone , the residents were temporarily evacuated with the beginning of World War II . After the war, the municipality within the French occupation zone became part of the then newly formed state of Rhineland-Palatinate.

The town charter was awarded Dahn comparatively late. The state of Rhineland-Palatinate granted the application for the award of January 24, 1963 on October 27 of the same year. In the course of the first Rhineland-Palatinate administrative reform , the city became the seat of the newly created community of Dahner Felsenland , to which it also belongs.

On June 30, 2019, an anti-refugee attack occurred in the city , in which two asylum seekers were injured by an attacker.

On the Catholic side, the city has been part of the Speyer diocese for more than two centuries , where it is subordinate to the Pirmasens deanery . There is also a Catholic parish in the city. The Evangelicals are part of the Protestant Church of the Palatinate .

In the south of the city, on the edge of the Hochstein rock group, is the Dahn Cemetery of Honor for 2,412 soldiers who died in World War II . In addition, there was a hospital chapel on site for a while, the equipment of which was taken over in 2009 by the Catholic Church of St. Michael in Bobenthal

The local Jewish community once owned a synagogue that no longer exists. Its members were buried in nearby Busenberg . Since November 2007, Stolpersteine ​​have been remembering those - predominantly Jewish - residents who were deported and mostly murdered during the Nazi era .

The city ​​council in Dahn consists of 20 council members, who were elected in a personalized proportional representation in the local elections on May 26, 2019 , and the honorary city ​​mayor as chairman.

His predecessor in office was Alexander Fuhr from the SPD, who held this office from 2009. In his first election, he prevailed against three competitors in the first ballot and in 2014 with a lead of 33 votes against his successor, who had run for the CDU at the time. Before that, Manfred Schreiner from the CDU held the office.

Based on historical findings, the Dahn coat of arms was redesigned in 1952.

In the Dahn area, Neudahn Castle and the Dahner Burgengruppe - consisting of the Altdahn , Grafendahn and Tanstein castles - are designated as monument zones. In addition, there are a total of 31 individual objects that are under monument protection , including the Catholic Church of St. Laurentius , the war memorial for the fallen of the First World War and the Ingbert-Naab-Haus .

The ruins of the Gerstbergerkopf Castle are also located in the northern part of the city limits . The Eybergturm was built on the Großer Eyberg in the 1950s . In addition, the city is part of a planetary trail that also extends over Hinterweidenthal and Bruchweiler-Bärenbach.

According to regional folklore, the forests around Dahn form one of the "habitats" for the mythical creature Elwetritsch , to whom an Elwetritsche fountain and other "monuments" are dedicated in Dahn . A so-called castle museum is housed in the ruins of Altdahn Castle. The Dahn-Reichenbach Museum also exists .

The Jungfernsprung, the symbol of Dahn

There are numerous natural monuments within the city limits , including the Jungfernsprung , which overlooks the city. This is a roughly 70 meter high, steep rock, which, as part of the Palatinate Forest climbing area, is often the goal of sport climbers in summer and about which an old legend exists. Other striking rock formations in the urban area, also classified as natural monuments, are the Hochstein , the Bride and Groom formation and the Löchelfelsen .

In addition, the Moosbachtal nature reserve is located in the Dahn district .

There are several knight stones in the Dahn area ; they mostly mark points of orientation for hikers such as the one with the number 213, which bears the inscription "Three beeches".

The crime scene episode The forest stands black and is silent from 2012 was partly shot in Dahn. In addition, the city belongs to the broadcasting area of ​​the television program OKTV Südwestpfalz .

The largest sports club within the city is the Turnverein 1910 Dahn e. V. , which offers basketball among other things. With FC Dahn there is also a football club. There is also the Dahn Art Association . The Palatinate Forest Association also has a local branch in Dahn.

The Martini market takes place every year on site.

In Dahn, the fool call Trisch - Lau is cultivated during carnival .

Due to the geographic conditions, the forest and timber industry dominated the area for centuries. The Wagau forestry office is also located in the city.

In the structurally weak southwestern Palatinate, Dahn has to get along without any significant industry . The problems can be seen, among other things, from the fact that the population is declining. Only tourism shows a positive trend in view of the largely intact nature , which is sometimes viewed as "spectacular" . The city was the seat of Raiffeisen- und Volksbank Dahn eG , which merged with VR Bank Südliche Weinstrasse in 2017 to form VR Bank Südliche Weinstrasse-Wasgau .

The federal road 427 runs right through Dahn and runs from Hinterweidenthal via Bad Bergzabern to Kandel . A smaller bypass is planned for the future. State road 489 branches off from the federal road to Bundenthal . The district road 39 creates a connection to Erfweiler. The Kreisstraße 40 creates a connection to Altdahn Castle. The county road 41 via Schindhard to Bärenbrunnerhof .

The originally planned closure of the A 8 between Pirmasens and Karlsruhe past Dahn was never realized. In addition, Dahn is the seat of a road maintenance depot of the State Mobility Speyer .

The Wieslauterbahn , which opened in 1911 and whose regular passenger train service was discontinued in 1966, has been in service since 1997. In Dahn it has four stations with the train station and the stops Moosbachtal, Dahn Süd and Busenberg-Schindhard . The last-mentioned stopping point is at the level of the Reichenbach district. The trains run on Wednesdays, Saturdays, Sundays and public holidays from May to October as well as every year to the Martini market and the Dahn carnival parade.

The Dahn elementary school supplies the city and the communities of Schindhard and Erfweiler. The Dahn school center with a Realschule plus and the Otfried-von-Weißenburg-Gymnasium Dahn has the western Wasgau as its catchment area. The high school is the only one in the district of Südwestpfalz. In the building of the former Ritter-von-Tann-Förderschule there are now classrooms of the district adult education center Südwestpfalz and the cafeteria of the school center. From 1958 to 1994 the Catholic Church ran the St. Pirmin Student Home in the Diocese of Speyer , a boarding school for male students that was named after St. Pirminius .

The city's general St. Josef Hospital was closed at the end of 2005 for cost reasons. In the Felsenland Clinic for Psychotherapy, a special technique of psychoanalytic hypnosis in the form of hypnotherapy , which was developed there, is practiced. Dahn also has an outdoor living group at the Palatinate Clinic for Psychiatry and Neurology . The Josefs-Gesellschaft converted the former student home into an institution for the disabled, which operates under the name Conrad-von-Wendt-Haus . There is also a spa park in the city. 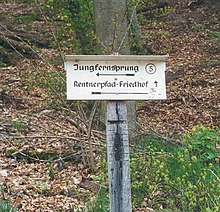 The Kaiserslauterer Hütte of the Kaiserslautern section of the German Alpine Club is located in the south of the district on the border with Bruchweiler-Bärenbach . In addition , the Dahner Hütte - Im Schneiderfeld , which is operated by the Dahn branch of the Palatinate Forest Association and was inaugurated in 1959 - is located within the city limits ; it offers hospitality and sleeping places. There is also a campsite at Büttelwoog and a little further east the Felsenland Youth Hostel , which is subordinate to the German Youth Hostel Association . The Dahner Felsenland was awarded a premium hiking region by the German Hiking Institute on January 12, 2019 .

Dahn is on the German-French tourist route and on the German Shoe Road . With the biosphere tour and the Pamina cycle path Lautertal , which runs from Hinterweidenthal to Neuburg am Rhein , two cycle paths also lead through the district. The former forms a round trip over Bruchweiler-Bärenbach, Rumbach and Fischbach near Dahn. The western part of the Klingbach cycle path is also located in the Reichenbach district . Dahn is also the starting point for Tour 13 of the Palatinate Forest Mountain Bike Park .

Dahn houses a police station that the police department Pirmasens the police headquarters Westpfalz subordinate. Until 1966, Dahn was also the seat of a local court . The Felsland Badeparadies adventure pool is also located in the southwest of Dahn .

After the Second World War, Dahn became part of the so-called Pirmasens Military Community . The Dahn Ammo Area and the Dahn Terminal Station were in the urban area ; both facilities were closed in 1993.