Merzalben is a municipality in the district of Südwestpfalz in Rhineland-Palatinate . It belongs to the Verbandsgemeinde Rodalben , within which it is the largest in terms of area, but the third smallest in terms of population. Merzalben is a nationally recognized tourist destination . The name of the village is derived from the Merzalbe , which flows through the place.

The place is in the Palatinate Forest , largely within its sub-area Graefensteiner Land ; only the northeast belongs to the Frankenweide . Neighboring communities are - clockwise - Leimen (Pfalz) , exclave of Wilgartswiesen , exclave of Annweiler am Trifels , Wilgartswiesen, Münchweiler an der Rodalb and Clausen . The next larger city is Pirmasens , located to the southwest . 91% of the district area is forested. The Birkwieserhof, Kufenberg and Wieslauterhof residential areas also belong to Merzalben .

Two kilometers east of the settlement area are the 521 meter high Winschertberg and the 437 meter high Schlossberg . Further to the south-east are the Wartenberg and its summit plateau Wartenberger Kopf (493 meters), the Vordere Winschertkopf and the Schmale Hals . The 609.9 meter high Weißenberg and the 606.2 meter high Hortenkopf rise in the far east of the district . The 590.8 meter high Mühlenberg also stretches along the border with Leimen .

The Palatinate main watershed runs through the middle of the municipality. The Merzalbe runs through the middle of the district and settlement area. On site, the Wilhelmsbach flows into it from the left . The Wartenbach , which is dammed up shortly after its source to the Gambswoog, runs further south beyond the watershed and the buildings . Its left tributary Scheidbach initially forms the district boundary, which is then continued by the Wartenbach. In the area of ​​the Merzalben / Münchweiler / Wilgartswiesen district triangle, it flows into the Lauter from the left , which previously rises just a kilometer further northwest above the Wieslauterhof and leaves the Merzalber district after the Wartenbach brook.

Merzalben was first mentioned in a document in 1237. In this document Friedrich III. von Leiningen in the context of the distribution of property between the brothers Friedrich III. and Emich IV. von Leiningen were awarded the “Castrum Grebinstein” with the villages “Merichisalbin”, “Rothalbin” and “Eiswilre” . In 1381 the place previously belonging to the diocese of Metz changed to the diocese of Worms .

The village of Merzalben belonged to the margraviate of Baden until the end of the 18th century .

In 1794 the left bank of the Rhine was occupied in the First Coalition War. From 1798 to 1814, when the Palatinate was part of the French Republic (until 1804) and then part of the Napoleonic Empire , Merzalben was incorporated into the canton of Waldfischbach in the Donnersberg department . During this time, the place was the seat of a Mairie , which also included Leimen .

Due to the agreements made at the Congress of Vienna , the area first came to Austria in June 1815 and was ceded to the Kingdom of Bavaria in 1816 on the basis of a state treaty . Under the Bavarian administration, Merzalben belonged from 1817 to the Landkommissariat Pirmasens in the Rhine district , which was then converted into a district office.

In 1939 Merzalben was incorporated into the district of Pirmasens (from 1997 district of Südwestpfalz ) . After the Second World War , the municipality of Merzalben within the French occupation zone became part of the administrative district of Palatinate in the then newly formed state of Rhineland-Palatinate . In the course of the first administrative reform in Rhineland-Palatinate , the municipality was assigned to the newly created Verbandsgemeinde Rodalben in 1972 .

The development of the population of Merzalben, the values ​​from 1871 to 1987 are based on censuses:

Parish Church of the Holy Cross

At the end of 2014, 62.3 percent of the population were Catholic and 20.8 percent Protestant. The rest belonged to another religion or were non-denominational. The Catholics belong to the Diocese of Speyer , the Protestants to the Protestant Church of the Palatinate . Until 1723, on the Catholic side, Merzalben belonged to the parish of Rodalben, before it became independent in this regard. Initially, the local parish was also responsible for glue, before the latter became independent in 1864.

The local council in Merzalben consists of 16 council members, who were elected in a personalized proportional representation in the local elections on May 26, 2019 , and the honorary local mayor as chairman.

The ruins of Gräfenstein Castle , which is about two kilometers east of the settlement area and gave the region its name, as well as the Wieslauterhof are designated as monument zones.

In addition, there are a total of 13 individual objects that are under monument protection , including the 28 meter high Luitpold Tower ; it was built in 1909 on the summit of the Weißenberg as a lookout tower. The Dreiherrenstein , which is also designated as Ritterstein  57 , is located directly on the boundary of Wilgartswiesen .

The approximately 2400 hectare core zone of the Wieslauter headwaters of the Palatinate Forest Nature Park lies partly in the Merzalben area.

The local name for the residents of Merzalben is "Neecher", the Palatinate dialect for "negro"; supposedly this goes back to the words of a pastor named Richard Frank: “Do you want to be Christians? You are pagans. You are Neechers! "

There are numerous knight stones on the parish of the municipality . In addition to the already mentioned Dreiherrenstein, there is the Ritterstein 54 Schäferei , which indicates a sheep farm in Gräfenstein Castle. 55 Gap refers to a ravine that is popularly known as "Gap". 56 Königswoog marks a woog of the same name, which once served the wood drift.

After the Second World War, Merzalben was also part of the Pirmasens Military Community, which has now been dissolved . On site, a free importer also temporarily sold Lynx cars, among other things . The municipality was the seat of the Raiffeisenkasse Merzalben eGmbH , which was merged into the VR-Bank Südwestpfalz Pirmasens-Zweibrücken in 1962 and several other mergers .

State road 496 runs through the village . The county road 52 connects the settlement area with the Gräfenstein Castle. There is a connection to long-distance traffic via the nearby Thaleischweiler-Fröschen driveway on the A 62 . 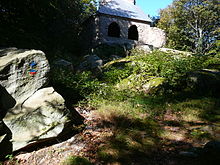 Path markings (left) in the area of ​​Merzalben