Trulben (also Trulwe ) is a municipality in the district of Südwestpfalz in Rhineland-Palatinate . It belongs to the Pirmasens Land Association .

Trulben is located in a wide, rock-lined valley basin southeast of Kröppen in the Zweibrücker hill country , which merges into the Palatinate Forest in the eastern part of the district and is the central location on the Hackmesserseite . To the east of Pirmasens lies the Hochstellerhof district at 430  m above sea level. NHN . Neighboring communities are - clockwise - Vinningen , Obersimten , Lemberg , Eppenbrunn , Hilst and Kröppen.

The Trualbe rises on the northeastern edge of the village and joins two tributaries in Trulben. In the south of the municipality marker it takes the Eppenbrunner Bach from the left .

Count Jakob von Zweibrücken-Bitsch (1510–1570) died in 1570 as the last male member of his family. The Lemberg office was inherited by his daughter, Ludovica Margaretha von Zweibrücken-Bitsch , who was married to the (heir) Count Philipp (V) von Hanau-Lichtenberg . Her father-in-law, Count Philipp IV. Von Hanau-Lichtenberg , gave the strict Roman Catholic Duke Karl III by immediately introducing the Lutheran creed . of Lorraine, the opportunity to intervene militarily, as the latter had suzerainty over the Bitsch rule, which was also part of the inheritance . In July 1572 Lorraine troops occupied the county. Since Philip IV was unable to cope with the overwhelming power of Lorraine, he chose the legal route. In the subsequent process before the Imperial Court of Justice, Lorraine was able to prevail with regard to the Bitsch rule, while the Lemberg office - and thus also Trulben - was awarded to the County of Hanau-Lichtenberg . The treaty that ended the dispute also contained a passage that guaranteed Catholics free exercise of their faith in Trulben.

1736 died with Count Johann Reinhard III. the last male representative of the Hanau family. Due to the marriage of his only daughter, Charlotte (1700–1726), with the Hereditary Prince Ludwig (VIII.) (1691–1768) of Hesse-Darmstadt , the county of Hanau-Lichtenberg fell to there. Hochstellerhof was built in 1745.

In the course of the French Revolution , the left bank of the Hanau-Lichtenberg county - and with it the Lemberg and Trulben offices - fell to France in 1794. After the end of Napoleonic rule, Trulben came to the Bavarian Rhine District .

The municipal council in Trulben consists of 16 council members, who were elected in a personalized proportional representation in the local elections on May 26, 2019 , and the honorary local mayor as chairman.

Harald Hatzfeld (SPD) became the local mayor of Trulben on June 27, 2019. In the direct election on May 26, 2019, he was able to prevail against his predecessor Jürgen Noll (CDU), who had held the office for five years, with a share of 51.90% of the votes.

Trulben has had an unofficial partnership with the Belgian city of Roeselare since 1965 . 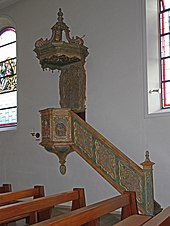 There are a total of five objects on site that are listed , including the Catholic Church of St. Stephan . This contains a pulpit from the Sturzelbronn Abbey , which previously held rights in Trulben.

The Felsenbrunnerhof is a handsome homestead from 1788.

With the steep rock walls behind the houses, Trulben offers a picturesque backdrop.

Entrance to Trulben with Krappenfelsen, guild tree and crucifixion group

The Hornbach-Fleckenstein cycle path , which runs from Hornbach to Bundenthal, runs through the district of Trulben . Trulben is also on Deutsche Schuhstrasse . The southern route of the Palatinate section of the historic Way of St. James leads across the municipality . One of the so-called Saar-Rhein hiking trails is the route from Niederauerbach to the Bienwald , marked with a green bar , which runs through the southern part of the municipality marker . Several circular hiking trails run through the wooded valleys around the village.