Thaleischweiler-Fröschen is located north of the town of Pirmasens at the southern end of the Sickinger Höhe in the valley floodplain and on the two slopes of the Schwarzbach . This flows through the community from east to west, to the west of the residential development the Wallhalb coming from Sickinger Höhe flows into it from the right . In the northeast of the district is the so-called Rieslochklamm . Neighboring communities are - clockwise - Höheinöd , Donsieders , Rodalben , Petersberg , Höhfröschen , Rieschweiler-Mühlbach , Maßweiler and Herschberg .

The history of the two current districts is closely linked to the aristocratic houses of Leiningen and Hanau-Lichtenberg . The houses jointly ruled Thaleischweiler for a long time , Thalfröschen belonged to Hanau-Lichtenberg.

The local council in Thaleischweiler-Fröschen consists of 20 council members, who were elected in a personalized proportional representation in the local elections on May 26, 2019 , and the honorary local mayor as chairman.

Thomas Peifer (CDU) became the mayor of Thaleischweiler-Fröschen in 2004. In the direct election on May 26, 2019, he was confirmed in his office for another five years with a share of the vote of 55.98%. 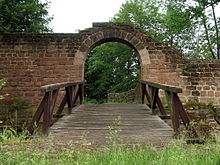 The Pirmasens Nord train station, the ruins of Steinenschloss Castle from the 12th century and the Rosselmühle are designated as monument zones.

There are also ten individual objects that are listed .

The Meisenbach Chapel , alternatively called St. Cyriakus Chapel , is the ruin of a late Gothic hall building from the 13th century. The Protestant parish church is a hall building designated 1619 and 1620; the substructure of the west tower and parts of the walls and arcades of the previous building date from the second half of the 13th century. The Catholic parish church of St. Margareta is a romanizing hall building built by the architect Albert Boßlet from Würzburg between 1928 and 1931. The Thaleischweiler-Fröschen local history museum is housed in the listed village community center. There is also a war memorial in Friedhofstrasse

With the Saufelsen in the northeast of the district there is a total of a natural monument on site . 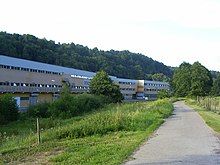 As in the entire Pirmasens region, the local shoe industry has long been an important branch of the economy. The shoe retail company Reno was based in Thaleischweiler-Fröschen until 2016, before it was relocated to Osnabrück .

Thaleischweiler-Fröschen has a connection in the east to the two-lane Autobahn 62 (Pirmasens - Landstuhl ), which is only partially two-lane . This crosses the valley of the Schwarzbach over the Schwarzbachtalbrücke , which has a span of 700 m. The Autobahn 8 ( Zweibrücken –Pirmasens) as well as the federal highways 10 (Pirmasens– Landau ) and 270 ( Kaiserslautern –Pirmasens) also pass nearby.

Thaleischweiler-Fröschen is connected to the Landau – Rohrbach railway line through the station of the same name and to the DB rail network through the Pirmasens Nord station in the area .

The place has a primary school and an integrated comprehensive school .

Thaleischweiler-Fröschen is the southern end point of the Mühlenweg, which leads through the Wallhalb valley, and the Sickinger Mühlenradweg . In addition, the Pirminius cycle path running from Hornbach to Wilgartswiesen leads through the community. A hiking trail that is marked with a yellow bar and runs from Contwig to Germersheim runs through the municipality . In addition, a path marked with a yellow-red bar runs from Lichtenberg Castle to Wachenheim across the municipality. In addition, the place is on the Höcherbergweg , which begins in Niederwürzbach and which is marked with a red and white bar ; its eastern end point is in Böchingen . The Grieswaldhütte , which was inaugurated in 1983 and is operated by the local group of the Palatinate Forest Association based in Thaleischweiler-Fröschen, is located on the north-eastern edge of the settlement .

The Biebermühle outdoor swimming pool exists in the east of the district .