Contwig is a municipality in the Südwestpfalz district in Rhineland-Palatinate . It belongs to the Verbandsgemeinde Zweibrücken-Land , within which it is the largest local community in terms of both number of inhabitants and area. It is also the second largest in terms of population within the district.

The community is traversed by the Schwarzbach in an east-west direction . On site he takes several tributaries such as the Wahlbach , the Bach vom Ehringer Wald , the Stambach , Hohlbach , Bach am Mühlberg and the Contwiger Graben .

Contwig was first mentioned in a document in 1237. From the early modern period to the end of the 18th century to the Duchy of Pfalz-Zweibrücken .

From 1798 to 1814, when the Palatinate was part of the French Republic (until 1804) and then part of the Napoleonic Empire , Contwig was incorporated into the canton of Zweibrücken and was the seat of a mairie , which also included Dellfeld, Niederauerbach , Oberauerbach and Stambach. In 1815 the place Austria was added. Just one year later, Contwig, like the entire Palatinate, moved to the Kingdom of Bavaria . Then the place changed to the Kingdom of Bavaria. From 1818 to 1862 the community belonged to the Landkommissariat Zweibrücken ; from this the district office of Zweibrücken emerged.

From 1939 the place was part of the district of Zweibrücken . After the Second World War , Contwig became part of the then newly formed state of Rhineland-Palatinate within the French occupation zone . In the course of the first Rhineland-Palatinate administrative reform , the neighboring town of Stambach was incorporated into Contwig on June 7, 1969. The district of Zweibrücken was dissolved three years later; At the same time, the community also moved to the district of Pirmasens, which was renamed in 1997 to "District of Southwest Palatinate" . In the same year it was incorporated into the newly formed community of Zweibrücken-Land .

In 1815 the place had 1,100 inhabitants. In the following century and a half, the population grew rapidly; the incorporation of Stambachs contributed to the fact that it rose to over 5000. It is now in decline. In the mid-2000s, the population fell back to below 5,000.

The Catholics belong to the diocese of Speyer and are subordinate to the deanery of Pirmasens , the Protestants to the Evangelical Church of the Palatinate . In 1928, both Catholics and Protestants owned a local parish.

Seal of the mayor's office in Contwig

The municipal council in Contwig consists of 20 council members, who were elected in the local elections on May 26, 2019 in a personalized proportional representation, and the honorary local mayor as chairman.

Karl-Heinz Bärmann (CDU) became mayor of Contwig in early 2009. Previously, he had already been deputy head of official affairs as an alderman at the time after the death of the former mayor Wilhelm Sefrin (CDU). Most recently in the direct election on May 26, 2019, he was confirmed in his office for another five years with a share of 63.22% of the votes.

There is a music train and a youth orchestra of the VT Contwig.

The largest club in Contwig is the United Turnerschaft Contwig 1888 e. V. with over 900 members. The local football club is the SV Palatia Contwig. The name of the association is derived from the Latin name for Palatinate. A heated outdoor pool was built from 1969 to 1971. The stage of the Trofeo Karlsberg 2010 cycling race on June 5 also led via Contwig.

The village festival takes place every three years. The fair is on the second weekend in September. Stambach celebrated its 700th anniversary in 2007. On the third. The Christmas market takes place in Advent.

Since 2013, there has been a local brewery with the Kornkammer-Brauhaus zum Truppacher Hof . 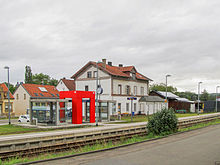 State road 471 runs through the middle of Contwig . The county road 72 connects the municipality with the Zweibrücker core city. The district road 73 connects the Ruppenthalerhof to the road network. The district road 74 leads from the Zweibrücker industrial park via the Contwig town center to Oberauerbach. Contwig is connected to the national road network via the federal motorway 8 ( Perl - Pirmasens ).

The public transport was from 2000 in the West Palatinate Transport Association organized (WVV) which completely in the summer 2006 transport association Rhein-Neckar is integrated (VRN). In addition, the municipality has two stops on the Landau – Rohrbach railway line, the Contwig train station and a stop in the Stambach district . It is served by regional trains on the RB 56 line, which run between Pirmasens and Saarbrücken . The existing station building no longer plays a role for rail operations.

While it was part of France, the place was the seat of a peace court , which was subordinate to the Tribunal of First Instance Zweibrücken .

The Hahnberghütte, inaugurated in 1922 and operated by the Zweibrücker Pfälzerwald-Verein group , and the Mühlberghütte on the southern edge of the settlement and maintained by the Contwig group, are located in the west of the municipality . The Pirminius cycle path , which runs from Hornbach to Wilgartswiesen , and a hiking path marked with a green bar lead through Contwig . In addition, the local community is the western starting point of another, which is marked with a yellow bar and which leads to Germersheim . In addition, the community is located on Höcherbergweg , which begins in Niederwürzbach and which is marked with a red and white bar ; its eastern end point is in Böchingen .

Contwig had its own elementary school until the 2019/2020 school year, but mold growth on the school building in the last school year caused unacceptable impairment of school operations. Since renovating the building would have been uneconomical, the association ordered the school to be closed permanently. From the 2020/2021 school year, students will be taught in containers in the Stambach district .

People who have worked in the community