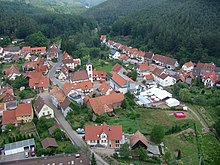 Spirkelbach is a municipality in the district of Südwestpfalz in Rhineland-Palatinate . It belongs to the Verbandsgemeinde Hauenstein , within which it is the fourth largest local community in terms of population.

Spirkelbach is located in the middle of Wasgau , as the southern part of the Palatinate Forest and the adjoining northern part of the Vosges are also called, between Hauenstein and Annweiler am Trifels in the Wasgau sub-area Dahner Felsenland . 76.5 percent of the district area is forested. Neighboring communities are - clockwise - Wilgartswiesen , Rinnthal , Wernersberg , Lug , Schwanheim and Hauenstein. The municipality also has a forest dexclave to the north-west, which is located within the southern Franconian pasture . In the north it borders on Wilgartswiesen and in the south on Hauenstein.

The 455.2  m high Höllenberg in the south, the Rindsberg in the north on the boundary with Rinnthal and the Spirkelbacher Rauhberg in the west surround the place.

The eponymous brook was first mentioned in a document as Spurchinebach 828. It flowed through uninhabited forest area that was donated to Hornbach Abbey . The place itself can be proven since 1303. By the end of the 18th century, the community formed a condominium , as it belonged jointly to Zweibrücken and the Leiningern .

From 1798 to 1814, when the Palatinate was part of the French Republic (until 1804) and then part of the Napoleonic Empire , Spirkelbach was incorporated into the canton of Annweiler and was subordinate to the Wilgartswiesen Mairie. In 1815 the place Austria was added. Just one year later, Spirkelbach moved to the Kingdom of Bavaria . From 1818 to 1862 the place was part of the Landkommissariat Bergzabern , which was then converted into a district office. On June 17, 1849, Spirkelbach was partially the scene of the battle near Rinnthal ; a Prussian battalion was sent to bypass the troopers across the community to Sarnstall .

In 1939 the place was incorporated into the Bergzabern district. After the Second World War , Spirkelbach became part of the then newly formed state of Rhineland-Palatinate within the French occupation zone . In the course of the first Rhineland-Palatinate administrative reform , the place moved in 1969 to the district of Pirmasens (from 1997 district of Südwestpfalz ) . Three years later it was incorporated into the newly created community of Hauenstein .

On the catholic side, the community belongs to the diocese of Speyer and there is subordinate to the deanery of Pirmasens , the evangelicals to the Protestant regional church of the Palatinate .

The council in Spirkelbach consists of twelve council members, who in the local elections on May 26, 2019 in a majority vote were elected, and the honorary mayor as chairman.

There are a total of eleven objects on site that are listed , including the war memorial.

There are several associations in the Rhineland-Palatinate community of Spirkelbach, including the choral society 1866 Spirkelbach and the fruit and horticultural association Spirkelbach . The local community also has a fishing club. A total of seven clubs are based in the place.

After the Second World War, Spirkelbach was also part of the Pirmasens Military Community, which has now been dissolved .

District roads 54 and 55 run through Spirkelbach  . The former leads from Wilgartswiesen to Schwanheim , the latter branches off in the settlement area from this one, which leads to Wernersberg on the other side of the district, where it becomes district road 61 .

The place is connected to the local transport network via the bus line 525 of the transport association Rhein-Neckar , which leads to Bad Bergzabern and Annweiler am Trifels . The closest train station is Wilgartswiesen on the Landau – Rohrbach railway line .

The Pirminius cycle path , which runs from Hornbach to Wilgartswiesen , leads through the community , as well as a hiking path marked with a red dot and one marked with a blue cross .