Jürgen Pommerenke (born January 22, 1953 in Wegeleben ) is a former football player in the GDR Oberliga , the top division of football in the GDR. There the 1.74 m tall midfield director played for 1. FC Magdeburg . 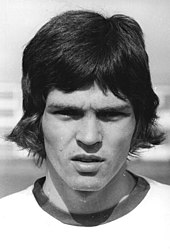 Pommerenke is one of the most successful soccer players in the GDR. With 1. FC Magdeburg he was three times soccer champion in the GDR and won the GDR soccer cup four times . In 1974 he was part of the Magdeburg team, which was the only GDR team to win a European Cup ( Cup Winners' Cup ). He played 57 full international matches and was part of the national team line-up, which reached the 1974 World Cup finals . He won the bronze medal at the 1972 Olympic Games football tournament. He was 44 times in the youth national team of the GDR, with which he won the UEFA youth tournament in 1970. In 1975 Pommerenke was elected Footballer of the Year , he remained the youngest holder of this title until the end of the GDR.

Pommerenke grew up in the town of Wegeleben, east of Halberstadt . There he played from 1961 to 1967 for the company sports association tractor and was delegated from there as a talented young player and on the recommendation of his sports teacher to the football focus of the region, the 1. FC Magdeburg . At the age of 16 he was appointed to the junior national team for the first time. He took part in three UEFA youth tournaments, the forerunner of the U-21 European Championship, and, in addition to winning the title in 1970, came second in 1969 and third in 1971. With his 44 junior international matches, he is in second place behind Gerd Weber (51) from Dresden . In the sponsoring company of the 1. FCM, the Magdeburg heavy machinery construction combine "Ernst Thälmann", he learned the trade of a mechanical engineer.

At the age of 17 Pommerenke was used for the first time in a competitive game of the first men's team of the Magdeburg club; it was the league match between 1. FCM and 1. FC Lokomotive Leipzig on September 26, 1970 (3: 2). He was called up in midfield, where he had his regular place throughout his career. He had only seven missions in his first league season, he was already part of the Magdeburg team in the 1971/72 season with 25 point games. At the same time, he had a significant share in winning the first Magdeburg championship title. A year later, Pommerenke won his second title in the men's division. On May 1, 1973, he defeated 1. FCM in the final of the GDR soccer cup in Dessau with 1. FC Lokomotive Leipzig 3-2. In 1974 and 1975 Pommerenke was also GDR champions with 1. FC Magdeburg. In 1978, 1979 and 1983 further cup victories followed.

Selection player in the men's area

A year earlier, Pommerenke had been used for the first time in the senior national team, on May 31, 1972 in the GDR-Uruguay international match (0-0). Shortly afterwards, Pommerenke took part in the soccer tournament of the Olympic Games in Munich. He was used in all seven matches and was also part of the team that won the bronze medal on September 10, 1972 after a 2-2 draw with the Soviet Union. Although he had given up his regular place in the senior national team to Reinhard Häfner , he played two more qualifying games with the Olympic team in 1975. After that, however, he was no longer considered in the Olympic selection, so he missed the gold medal, which the GDR selection won in Montreal in 1976. A year earlier, however, Pommerenke was in the squad of the senior national team, which participated in the final round of the 1974 World Cup in Germany. He played three of the six World Cup games and was not involved in the legendary 1-0 victory over the German national team . His farewell game from the national team took place in front of a home crowd in Magdeburg on March 16, 1983 in amicable comparison with Finland. As a 30-year-old, he completed another 72 minutes before he was replaced by Matthias Liebers from Leipzig . In addition to the games in the senior national team and the Olympic selection, Pommerenke also played 18 junior international games and one game with the national B team.

With the national championship titles and cup wins of 1. FC Magdeburg, Pommerenke also played in the European cup competitions. Between 1972 and 1984 he played 48 European Cups with the Magdeburg club. The most successful was on May 8, 1974 in Rotterdam instead stood as Pommerenke in the team, in the final of the European Cup Winners' Cup to AC Milan 2: defeated 0th

On September 15, 1984 Pommerenke completed his last competitive game for 1. FC Magdeburg. In the league game BFC Dynamo-1. FC Magdeburg (3: 1) he finally said goodbye to high-performance sport after increasingly struggling with knee problems. For his Magdeburg team, he had played 301 games in the upper league, 55 GDR Cup games and 48 games in the European cup competitions in 15 seasons. In a total of 404 competitive games, he had scored 147 goals as a midfielder.

“A highly qualified technician with excellent tactical skills and an exemplary approach to life. He was a midfield director who could have held a leadership position in any top European team. "

In 1985 Pommerenke, who had obtained his trainer diploma at the Leipzig Sport University DHfK , started working as a junior trainer for 1. FC Magdeburg. In 1992 and 1993 he looked after Magdeburg's amateur league team and then worked in the state football association of Saxony-Anhalt. In 1999 he became junior coordinator at 1. FC Magdeburg. Since 2008 he has been running a training camp for children in Jerichow once a year . Jürgen Pommerenke lives in Magdeburg and runs a soccer school.