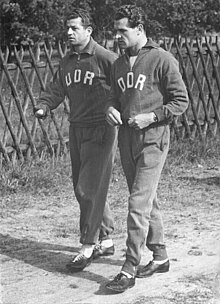 The center forward, who scored 114 goals in 237 games in the GDR Oberliga for BSG Wismut Karl-Marx-Stadt , which was known as SC Wismut Karl-Marx-Stadt until the end of his career , was one of the most popular GDR footballers in the 1950s . In the 1954/1955 season Tröger was top scorer in the highest East German division with 22 goals. Tröger, who began his career as a goalkeeper, had to vacate his regular place in the goal after the Second World War because a grenade had torn off the right hand of the then 16-year-old at the front. The then player -coach Walter Fritzsch discovered him in Zwickau-Oberhohndorf and took him to Wismut Cainsdorf . At the age of 22, Tröger moved with Fritzsch from Cainsdorf to Aue, which had just been promoted to the top division. With bismuth he won the trophy and three championship titles in the Loessnitz valley and played a major role in it. Tröger was one of the best German strikers of all time. He was the star striker in the club and in the national team. He was one of the GDR select players from the very beginning and scored two goals in the first international win of the GDR team in 1955 in Bucharest against Romania (3-2).

Born in Zwickau, he made a total of 15 selections between 1954 and 1959, scoring 10 goals. He also played 14 European Cup games. On October 6, 1956, he stood in front of over 100,000 spectators in the Leipzig Central Stadium in the legendary comparison between SC Wismut Karl-Marx-Stadt and 1. FC Kaiserslautern (3: 5) on the field.

Willy died on March 30, 2004 in Pirna-Copitz, Saxony, at the age of 75. He had stomach cancer and had two operations. The Erzgebirge folk rock singer and songwriter Stefan Gerlach created a musical monument to the idol with the song "Tröger-Will". In honor of Willy Tröger, the stadium of VfL Pirna-Copitz was renamed “Willy-Tröger-Stadion” (previously: Sachsenstadion).