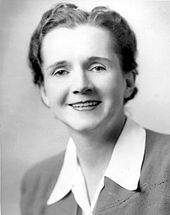 After the Second World War , concern about the harmful effects of toxic substances on the environment grew. One trigger was the realization that the pesticide DDT , which was initially considered to be harmless, can have negative effects on stocks of fish and birds, among other things. With the 1962 book Silent Spring by the American biologist Rachel Carson , the general public became aware of the possible negative effects of the unchecked use of pesticides on the environment; For a long time, however, the book was only known in the Anglo-Saxon area. The massive use of herbicides by the USA in the Vietnam War (1965–1973), in particular Agent Orange , which is contaminated with the dioxin TCDD , increased public criticism, according to which too little is known about possible harmful consequences for the population and the environment.

The term “ecotoxicology” itself was introduced into the literature in 1969 by the French toxicologist René Truhaut (1909–1994), but did not establish itself in the German-speaking world until around 10 years later.

Ecotoxicology essentially serves to identify hazards at all organizational levels of biology: at the level of molecules (such as DNA ), cells , tissues , organs , populations , right through to ecosystems and the biosphere . The results of the ecotoxicological studies form the basis for identifying and assessing substances with regard to their risks for living beings, communities and the environment. For this purpose, both substance-related and media-related data must be determined, i. H. how (toxic) does a substance affect which organisms in which environmental compartment (air, soil, water)? The results of ecotoxicological studies serve, among other things, as a basis for laws (e.g. Chemicals Act , Plant Protection Act , Soil Protection Act ) and thus the minimization of risks through the manufacture and / or use of substances.

In order for the hazard potential of a substance to be determined, the following aspects, among others, must be examined in the context of ecotoxicological issues:

In order to be able to deal with the various questions in ecotoxicology, very different investigation methods have been developed, some of which are used in the laboratory but also in nature itself. In the laboratory, standardized tests with high reproducibility can be carried out, the significance of which can be low with regard to the natural environment with an infinite number of interactions. Therefore, if possible, dose-effect curves and toxicity determinations are carried out in so-called model ecosystems. Typical limit values ​​are PNEC , LOEC and NOEL . Regulations and guidelines are the OECD guidelines for the testing of chemicals and Regulation (EC) No. 1907/2006 (REACH) . The will bioaccumulation and biomagnification examined, for example, to test for PBTs and vPvBs . In the case of heavy metals , the mobilization is examined. The bioconcentration is examined in aquatic organisms .

Depending on the substance to be examined and its effects on a specific environmental compartment ( water , soil , air ), various test methods are used. To determine the aquatic ecotoxicity z. B. the harmful concentration of substances on four groups of organisms ( fish , small crustaceans , green algae and bacteria ) examined. For the soil compartment, the effect of substances on bacteria, higher plants and compost worms is being investigated.

In these investigations it is observed from which concentration a species of organism is impaired with regard to the observed effect. These effects can e.g. B. be:

With the help of this data and information about entry paths, the behavior / whereabouts of the substance (and thus ultimately the duration of exposure and / or the accumulation potential) and achievable concentrations (production / application quantities), the risk potential of substances on organisms and the The environment.

according to OECD Guidelines for the Testing of Chemicals

According to DIN / EN / ISO