Because of its good solvent properties, carbon disulfide has e.g. B. used as a solvent for white phosphorus in phosphorus bombs or in the vulcanization of rubber after the cold vulcanization process. However, this process has been replaced by hot vulcanization . However, the main area of ​​application is the production of viscose fibers and thiocarbamates. 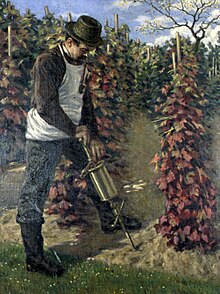 Injecting the soil with carbon disulfide was an effective, laborious, and expensive method of controlling phylloxera . The liquid, easily evaporating, poisonous carbon disulfide was brought into the main root area of ​​infected vines with hand injectors. By refining the noble variety with a resistant rootstock, this option became superfluous and has been banned since 1997.

Carbon disulfide has a positive standard enthalpy of formation (for liquid CS 2 : Δ H f = +89.7 kJ / mol), so the synthesis from the elements is an endothermic reaction . When it breaks down into the elements sulfur and carbon, the compound can release the corresponding amount of energy again. However, the decay does not occur spontaneously because it is a metastable compound .

The synthesis from the elements took place until the 1950s with exclusion of air by transferring sulfur vapors over glowing charcoal at 800–1000 ° C.

Nowadays, carbon disulfide is synthesized from mostly unpurified natural gas (or other sources of alkanes such as methane ) and sulfur at 600 ° C in the presence of catalysts. This reaction also produces hydrogen sulfide , which is further processed industrially.

Often, carbon disulfide is also produced naturally, for example during putrefaction or geological processes. Globally, however, carbon disulfide only accounts for a small proportion of the total sulfur emissions into the atmosphere.

Carbon disulfide is a colorless, highly refractive liquid. In its pure state, carbon disulfide smells pleasantly like ether ; this ethereal odor is usually no longer perceptible due to impurities. Usually small amounts of other sulfur compounds are the cause of a sometimes disgusting smell.

The compound is a good solvent for iodine , sulfur, selenium , white phosphorus , fats , rubber and resins as well as cellulose . It is also an excellent dielectric ( dielectric constant ε r = 2.632).

The carbon disulfide molecule, like carbon dioxide, is a linear molecule with one sp-hybridized carbon atom and two (pp) π bonds.

Carbon disulfide forms highly flammable vapor-air mixtures. The compound has a flash point below −20 ° C. The explosion range is between 0.6% by volume (19 g / m 3 ) as the lower explosion limit (LEL) and 60.0% by volume (1900 g / m 3 ) as the upper explosion limit (UEL). The maximum explosion pressure is 8.7 bar and the limit oxygen concentration is 4.6 vol.%. The limit gap width was determined to be 0.37 mm. This results in an assignment to explosion group IIC. With a minimum ignition energy of 0.009 mJ, vapor-air mixtures are extremely ignitable. The ignition temperature is 95 ° C. The substance therefore falls into temperature class T6 and is the only representative in this temperature class. 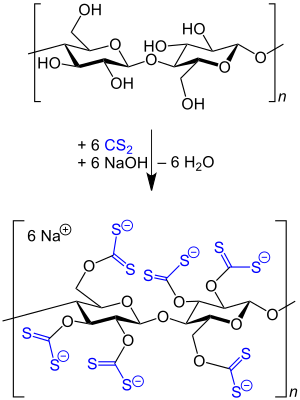 Scheme of the production of "viscose solution" from cellulose (above). In the example all hydroxyl groups are esterified.

Carbon disulfide is a solvent for greases, resins, rubber and caoutchouc. It is used in infrared spectroscopy because it has no interfering hydrogen or halogen bands . In addition, carbon disulfide shows a strong Kerr effect and is therefore used as a Kerr lens in solid-state lasers.

Copper xanthates release toxic carbon disulfide when they decompose, which was previously used for pest control.

The reduction with sodium in dimethylformamide gives the disodium salt of DMIT, short for dimercaptoisotrithione , a starting compound for the production of sulfur-rich heterocycles and substituted tetrathiafulvalenes .

Cooking with aqueous sulfide solutions produces trithiocarbonates . In the reaction with Grignard compounds , an insertion reaction produces magnesium salts, the hydrolysis of which results in dithiocarboxylic acids (R – CSSH). With ammonia, primary and secondary amines, dithiocarbamates are formed .

Traces of carbon disulfide (approx. 1 mg / l) are added to the electrolyte bath as a brightener during the galvanic silver deposition . It causes an immediate, temporary drop in cathodic polarization. This makes it possible to deposit almost mirror-like silver layers. This effect as a so-called shine maker has been known since the middle of the 19th century.

Carbon disulfide has the same index of refraction as glass, so glass immersed in carbon disulfide is virtually invisible. This is used, for example, to detect counterfeit diamonds. Unlike glass, real diamonds remain clearly visible even when immersed. It can also be used to synthesize artificial diamonds.

Carbon disulfide are with diethylamine in the presence of copper salts (Cu 2+ ), a yellow dithiocarbamate - complex :

This complex is also used to detect vapors by means of test tubes.

Other detection methods, such as the formation of red crystals by reaction with triethylphosphine , are also known.

In exhaust gases and in the air

Carbon disulphide emissions can be determined using an iodometric titration method in which a partial flow of the exhaust gas to be sampled is first passed through a cadmium acetate solution in order to absorb any hydrogen sulphide. The carbon disulfide is bound in ethanolic potassium hydroxide solution. The potassium ethyl xanthate obtained in this way is then titrated with an adjusted iodine solution. This process is successfully used in the viscose processing industry.

Common methods for determining carbon disulphide in workplace air are based on adsorption on activated carbon with subsequent desorption and gas chromatographic analysis of the desorbed substance.

In 2012, carbon disulfide was included by the EU in the Community's ongoing action plan ( CoRAP ) in accordance with Regulation (EC) No. 1907/2006 (REACH) as part of substance evaluation . The effects of the substance on human health and the environment are re-evaluated and, if necessary, follow-up measures are initiated. The reasons for the uptake of carbon disulfide were concerns about its classification as a CMR substance, environmental exposure, exposure of workers and high (aggregated) tonnage, and as a potential endocrine disruptor . The re-evaluation has been running since 2013 and is carried out by France . In order to be able to reach a final assessment, further information was requested.