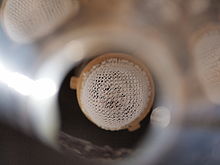 Incandescent mantle in a gas lantern without a flame

A mantle or gas Trumpf (also mantle called) is a dome-or pear-shaped weave structures of oxides , the gas fueled lamps ( gas lamps and those Petroleum - see Petromax  - or other liquid fuels evaporate) forms the light source by passing through the flame is excited to glow. It is made from a cotton , silk or rayon fabric prepared with special rare earth salts , which burns when heated in a gas flame and leaves the salts as oxides in the form of a fine structure. 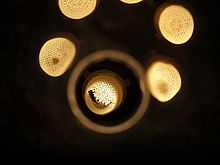 Incandescent mantles in a gas lantern: the defect shows that the flame itself is not lit. 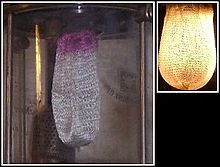 Incandescent mantle, on the left before first use, on the right after carefully burning the fabric and putting the lamp into operation.

Gas flames made from town or natural gas hardly light up because the flame has an emissivity close to zero in visible light. In order to make gas flames glow, the carbide lamp was developed earlier, which burns ethyne (acetylene), which creates a yellowish light like a candle flame through glowing carbon particles.

Carl Auer von Welsbach received whiter, brighter light : he soaked a knitted cotton net with a solution of rare earth salts, carefully burned the cotton and obtained a filigree self-supporting structure made of the oxides as residue. He patented the process on September 23, 1885 in Germany under the name Auer-Glühstrumpf .

In the past, mantles were made by soaking fabric with a salt solution of 99% slightly radioactive thorium nitrate and 1% cerium nitrate , drying it and then lighting it. In the heat, the thorium nitrate breaks down into thorium dioxide and nitrous gases. This leaves a fragile structure that emits white light in the gas flame. This glow has nothing to do with the very weak radioactivity of the thorium, but is an ordinary glow from the heat of the gas flame.

Initially, Carl Auer von Welsbach used magnesium oxides, zirconium dioxide , then lanthanum , yttrium and praseodymium compounds. They all have a moderate emissivity in the visible range and only produce a brown-white glow. He made his breakthrough with cerium (IV) oxide , together with thorium dioxide to improve stability. The composition of 1% CeO 2 and 99% ThO 2 was only replaced a few decades ago by a mixture of yttrium oxide and cerium oxide in order to be able to do without the slightly radioactive element thorium.

There are many forms of incandescent mantle, for example the bag-shaped incandescent mantle for tying up camping and high-intensity lamps , which the user has to light himself when starting up. Incandescent mantles for hanging or standing gas light are often burnt down at the factory and soaked with a nitrocellulose varnish to give them greater strength for transport. The lacquer layer burns off when the device is used for the first time. The hanging forms are usually spherical or pear-shaped; standing forms tubular or beehive-shaped. Sintered magnesia molded parts are often used to suspend the fabric and attach it to the lamp's burner .

The thermal emission of an Auer mantle (dotted line in the diagram) is significantly lower than that of a black body (blue line). For this, the radiation is concentrated on the short-wave range in the visible spectrum. As a result, the mantle takes on a higher color temperature than a continuously radiating substance would. The red component is reduced, the light appears whiter. However, the direct energy transfer from the sometimes high-energy chemical reaction partners of the flame to the electron level of the cerium-doped phosphor in the incandescent mantle mainly contributes to the high luminous efficiency of incandescent mantles; Incandescent mantles heated in the furnace do not shine nearly as brightly as in the flame.

Due to its luminosity, the incandescent mantle is still competitive with electric light if there is no connection to the power supply. The luminous efficacy of around 5 lm / W is only half that of an incandescent lamp, but cheaper energy can be used that can be stored at no additional cost.

However, the light output is less than a tenth of that of a gas discharge lamp or a white LED . For this reason, too, incandescent gas has lost its importance for street lighting. 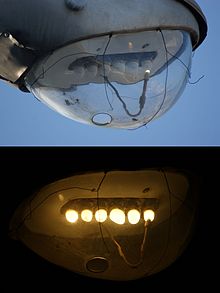 Since the city's gas works were abolished in the 1970s and natural gas flowed through the gas pipelines, the number of gas lanterns has fallen sharply. Instead of converting them to natural gas, they were often replaced by the less maintenance and more efficient, electrically operated gas discharge lamps.

In 2004, the last mantle production of the Berlin company MSA AUER GmbH that remained in Germany was sold to the Indian company Indo , a subsidiary of the Prabhat Udyog Limited consortium , and production was relocated to India. Indo offers both radioactive and non-radioactive mantles.

Since some of the thorium nitrate still used is weakly radioactive, such gas mantles may only be imported into Germany with a special permit.

According to the Berlin Senate Department for the Environment, Transport and Climate Protection, the city of Berlin replaced all of the remaining 8,000 gas row lights by 2016 and converted the last 7,500 gas lights to electric light by 2019. In addition to the higher efficiency, the reason given is the enormous maintenance effort and the procurement of the mantles, whereby the latter alone would have required an annual sum of EUR 1.2 million. According to a company publication from Braun Lighting Solutions, however, there were still more than 30,000 gas lamps in operation in Berlin in 2018.