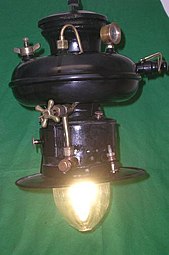 The Petromax lamp is a high-intensity lamp in which kerosene is passed through a gasifier under pressure and the fuel that has been vaporized is burned in a mantle , creating a bright light. This lamp belongs to the kerosene lamps . The lamp was developed in 1910 by the Berlin councilor Max Graetz at Ehrich & Graetz . Since Max Graetz was called "Petroleum-Maxe" by his Berlin friends, the name Petromax was very obvious for the lamp. The first Petromax was a hanging lamp; the most famous version today in the shape of a lantern has been around since 1922.

Petromax 829B with added support bracket

With the help of the built-in hand air pump, a pressure of around 2  bar is generated in the container . This pressure is necessary to drive enough petroleum up into the carburetor and through the nozzle on the carburetor when the lantern is in operation. In the operating state, the carburetor is constantly heated strongly by the flame in the incandescent body. As a result of this heat, the petroleum, which was liquid until then, evaporates at a temperature of about 250 ° C about halfway up the gasifier. The vaporous petroleum then flows on through the gasifier coil and is further heated - technically speaking, overheated - until it emerges from the small bore of the nozzle at almost the speed of sound (300 m / s). After exiting the nozzle, the petroleum gas, which was previously strongly compressed, expands and carries away the air required for combustion from the annular space in the upper part of the lantern. The resulting vortices and vibrations and the high speed cause the hissing noise of the Petromax lanterns. Petroleum air and steam pass above the nozzle at high speed into the mixing tube where they are mixed by turbulence, so that the petroleum gas below the mouthpiece incandescent body may burn completely.

The incandescent body consists of a rayon fabric that was impregnated with several salts during manufacture. The incandescent body is burned down when the lantern is first used, i.e. H. turned to ashes. The salts give the ash structure a certain shelf life. The burning in the interior of the incandescent body, non-luminous blue flame heats the filament to incandescence , thereby generating the high light intensity of the Petromaxlampe. 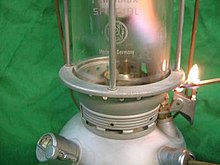 When commissioning, the carburetor must first be preheated so that the gasification process is initiated. This is done either by burning off the alcohol in the heating bowl or by using the rapid preheater, which works with petroleum and air from the container.

Petromax lamps were manufactured in different sizes and equipment variants. The smallest model of the Petromax lantern was the model 900 with 100  HK (approx. 90  cd ). The brightest lantern delivered 500 HK. The structurally largest Petromax lantern was the 830 model with 300 HK and 2 liter tank. There were also other devices under the name Petromax: stoves and ovens as well as hanging lamps for inside and outside in various sizes and with light intensities of up to several thousand Hefner candles.

As a rule, a Petromax lamp is operated with kerosene , but there were also petrol versions for the military . If necessary, operation with diesel or heating oil was also possible, but this greatly shortened the possible operating time due to the build-up of crack residues . The Bundeswehr had z. B. Type 829B in use, a 500 HK lantern with matt chrome plating, pressure gauge and rapid preheater. A special model was made for the Swiss Army, the 523/821 250 HK: a lamp with the large tank, but the small attachment of the 250 HK lanterns, with alcohol preheating and petrol operation.

A complete production cycle took over 20 days. A just-in-time production did not exist and it was hardly possible. The work steps were u. a .: punching , deep drawing , lettering, pressing, soldering, nickel plating , assembling , packaging. Only the last two of these operations could be produced on the assembly line. For the others, tools had to be changed and then larger batch sizes had to be prefabricated in stock.

Since the orders and letters of credit often came late and had less than 20 days to go before delivery, enough parts of each version had to be kept in stock.

The lettering Petromax or Aida was embossed on many parts to distinguish it from copies, which complicated the storage of parts.

In the 1960s, at least 80% of the lamps were exported. The main markets were all countries in which electricity was not available nationwide. The Petromax was the standard lamp in the home and in markets. In relation to the brightness it was very economical in terms of petroleum consumption. The lamp was easy to disassemble and repair.

There were quite a few copies of the lamp from Asian manufacturers. There was a shelf full of them in the Graetz museum room. Despite the higher price, the original was bought with pleasure for a long time because of its better quality. One hundred percent interchangeability of the spare parts was also important for the copies. The special "Graetz thread" had to be retained.

The lamp was also available with the brand "Aida" and in various versions, e.g. B. with green cap instead of nickel-plated for some Muslim countries.

History of the Petromax brand

Since the Graetz plants in Berlin - Treptow and Lunzenau ( Saxony ) were declared state- owned companies after the Second World War and the Bregenz plant was placed under fiduciary management, Graetz AG built a new plant in Altena / Westphalia for the production of radio devices and petroleum pressure lamps. There the Petromax was manufactured in large numbers.

In the 1970s, demand collapsed. To reduce production costs, production was relocated to what was then the low-wage country of Portugal and Casa Hipólito (in Torres Vedras , Portugal) manufactured high-quality lamps from the Petromax, Geniol and Hipólito brands. With the aim of further reducing manufacturing costs, production was finally relocated to China . There was successful and cheap production and the manufacturer realized that he was not only dependent on his German clients. He was soon producing identical and similar lamps for the world market, which he sold under various names. The then trademark holder for Germany and Central Europe, Schott AG , which had acquired the trademark rights via a number of detours from a number of legal successors to the expired Graetz AG / Graetz KG, did not prevent this.

Recent past and present

In July 2005, Schott AG transferred the trademark rights to DURAN Produktions GmbH & Co. KG, a subsidiary of the Adcuram Group, as part of the spin-off of the laboratory and industrial glass business. At the end of 2006 and beginning of 2007, Pelam International Ltd. bought based in London, the trademark rights, on January 13, 2014, they were transferred to the company AVB UG in Magdeburg. According to Pelam International, individual components of the lamp have been manufactured by various manufacturers since 2007, some components also in Germany. The final production of the Petromax lamps also takes place in Germany to ensure an adequate level of quality.