The title of this article is ambiguous. Further meanings are listed under rib (disambiguation) .

Human rib from below (inferior)

Ribs ( Latin costa , plural costae , adjective costalis ; ancient Greek πλευρά pleura ) are paired, rod-shaped, more or less long and more or less strongly curved bones of the vertebrate trunk . The ribs are connected to the sides of the trunk vertebrae. On the chest side, they can be connected directly (real ribs) or indirectly (false ribs) to a breastbone (sternum). The totality of the pairs of ribs forms the rib cage . In mammals, only the front (in humans, upper) trunk vertebrae carry ribs. These rib-bearing vertebrae are also called thoracic or thoracic vertebrae and the rib cage is accordingly referred to as the thorax .

Each rib consists of a rib bone on the spine ( os costale ) and, in mammals, also of a cartilaginous section, the costal cartilage ( cartilago costalis ). The gap between two successive ribs is called the intercostal space (ICR, intercostal space , space intercostale ). This space is filled by the external and internal intercostal muscles .

The ribs are articulately connected to the spine. The heads of the ribs touch two consecutive vertebrae, but in humans the 1st, 11th and 12th rib only articulate with the thoracic vertebra of the same number. The connection with the vertebral bodies is carried out by the head of the rib ( caput costae ), whose joint surface ( facies articularis capitis costae ) is divided into two parts on the ribs - in humans only the 2nd to 10th ribs. Below the head of the rib, the rib tapers to the rib neck ( Collum costae ). At the rib neck is the rib hump ( tuberculum costae ), which also bears an articular surface ( facies articularis tuberculi costae ), which forms a joint with the articular surface ( fovea costalis processus transversi ) of the transverse process of the same number.

The part that adjoins the sternum is the rib body ( corpus costae ). It has a furrow ( sulcus costae ) on the caudal inside , in which the intercostal nerves and blood vessels run. The rib body merges into the costal cartilage ( Cartilago costalis ) in the costal joint . The latter is connected to the sternum in the "real ribs" . In the "false ribs" this connection only exists via the cartilages of the "real ribs" six and seven. The free ribs have no connection to the sternum.

In addition to the normal shape of the ribs, there are some standard variants , such as the forked rib , which usually do not cause any discomfort. The most common disease of the rib is a rib fracture . 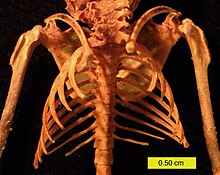 The number of pairs of ribs corresponds to the species-specific number of thoracic vertebrae. In mammals , the upper ribs (anterior in animals) are connected directly to the breastbone ( sternum ) via the costal cartilage . These are called sternal ribs. The lower (rear) ribs attach to the cartilaginous costal arch ( arcus costalis ), they are called asternal ribs . The last ribs can appear freely in the abdominal wall as so-called “flesh” or “fleeing ribs” ( Costae fluctuantes ) (in dogs, cats and humans).

Humans have twelve pairs of ribs, the upper seven ribs are sternal, the eighth to tenth asternal and the lower two end freely in the musculature. The sternal pairs of ribs (1 to 7) are also referred to as "real ribs" ( Costae verae ), the pairs of ribs 8 to 12 as "false ribs" ( Costae spuriae ). As a variety , a cervical rib can appear on the seventh cervical vertebra .