Neck ribs in a skeleton reconstruction of Plateosaurus 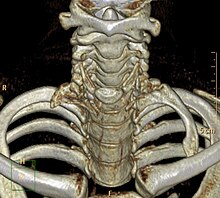 In humans, as in all mammals , the cervical ribs are reduced and, together with the transverse processes of the cervical vertebrae, form small bony eyelets (foramina processus transversi) in which the vertebral artery runs. Real ribs only appear in the thoracic spine , where they are involved in the structure of the thorax (chest).

An atavistic cervical rib on the 7th cervical vertebra can be a harmless malformation . They are usually dorsally attached, stubby ribs with cartilaginous or connective tissue connection to the sternum . This training is found in around 1% of people and is usually symptom-free, but sometimes it also causes symptoms in the form of cervical rib syndrome .