Skeleton of a pigeon

The skull has a very large orbit (eye socket). A kind of push rod ( os jugale and quadratojugale ) can be used to fold the upper jaw upwards, in addition to moving the lower jaw downwards . 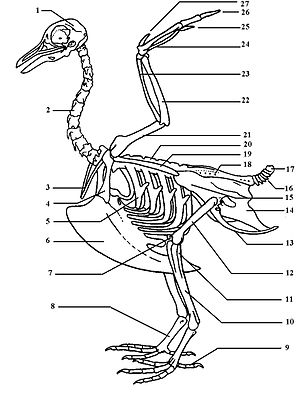 The neck of the birds is very flexible and long, because there are 10 to 31 ( Black Swan ), usually 14 or 15 cervical vertebrae.

The shoulder girdle consists of:

The wing skeleton (→ wing ) consists of

The flight feathers attach to the forearm and hand. A distinction is made between arm and hand swing .

The pool is like the mammal of the ilium (iliac), ischium (ischial) and pubis (pubic bone). It is fused with the synsacrum and has three openings for nerves and blood vessels to pass through . With the exception of the ostrich and rhea , it is open at the bottom, so there is no pelvic symphysis.

The leg skeleton consists of